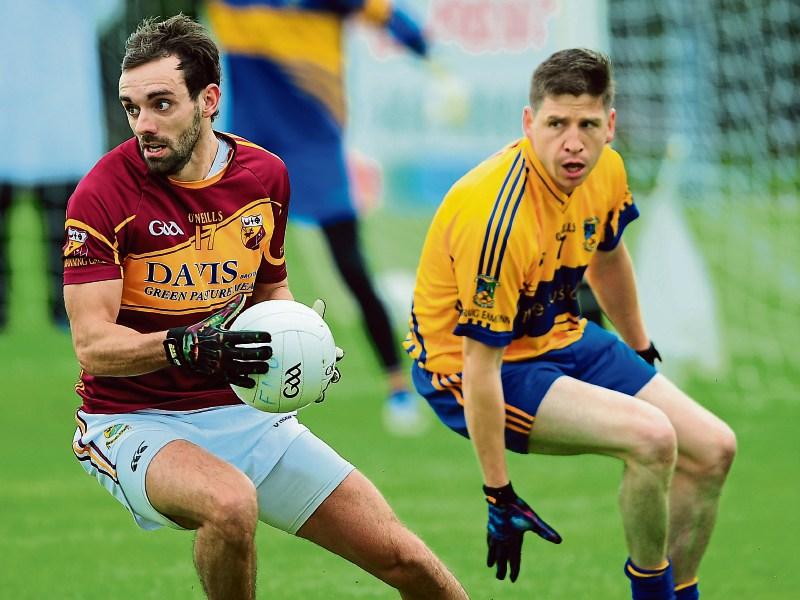 Johnny Gerety's goal in the early stages of the second half was the difference as Carrickedmond beat Fr Manning Gaels in the Group 3 clash at Maguire Park on Sunday last and thus succeeded in reaching their first Senior Football Championship quarter-final in nearly 30 years.

Having said that, the Drumlish/Ballinamuck side were guilty of squandering numerous goal chances and will be disappointed with the defeat but they put up a great performance for a team with little to play for as they were out of contention to qualify for the last eight.

Carrickedmond made the better start but found themselves behind at the break for the first time in the championship. John Gerety opened the scoring seconds after the throw-in before Keith McGuire added another point. Target man inside John O'Shea played a vital role and he was a thorn in the Gaels  side throughout the game.

Eoin Keane pointed a difficult free to reduce the gap before a Keith McGuire free and Marty Mulvey’s effort left Carrick leading by 0-4 to 0-1 inside 5 minutes,

But that would be the last score for Ger Carberry’s side for the next 20 minutes as Fr. Manning Gaels took over completely. A brace from Eoin Keane and David Cassidy’s first point levelled the game.

Cassidy was involved again when his rocket of a shot hit the underside of the crossbar and bounced out but Kevin Whelan slotted over the rebound. Petie Collum, Whelan and Pauric Gill extend the lead to 4 with their points, the latter being a fine solo effort.

Marty Mulvey came back into the game with a score in the 25th minute and when he hits top gear Carrickedmond can cause problems for their opposition. Jonathan Keegan and Aaron Quinn then exchanged scores then to close out the first half with the Gaels 0-10 to 0-6 ahead.

Carrickedmond came storming back with 1-6 in the opening ten minutes of the second half for a 7 point turnaround with 1-1 from Gerety key to their revival. But Carrick were lucky to hold out from there on with the Gaels looking for goals rather than ticking over the scoreboard for vital points.

They did bring it back to a point game with plenty of time still on the board but further scores from Carrickedmond forwards Mark McDonnell and Marty Mulvey clinched the hard earned victory.

Carrick will have a serious task whoever they meet in the quarter-finals and will have to up the ante against the stronger sides.

Fr Manning Gaels will be content in that they have retained their Connolly Cup status and will be playing in the Division 1 league next year after winning the Division 2 title.