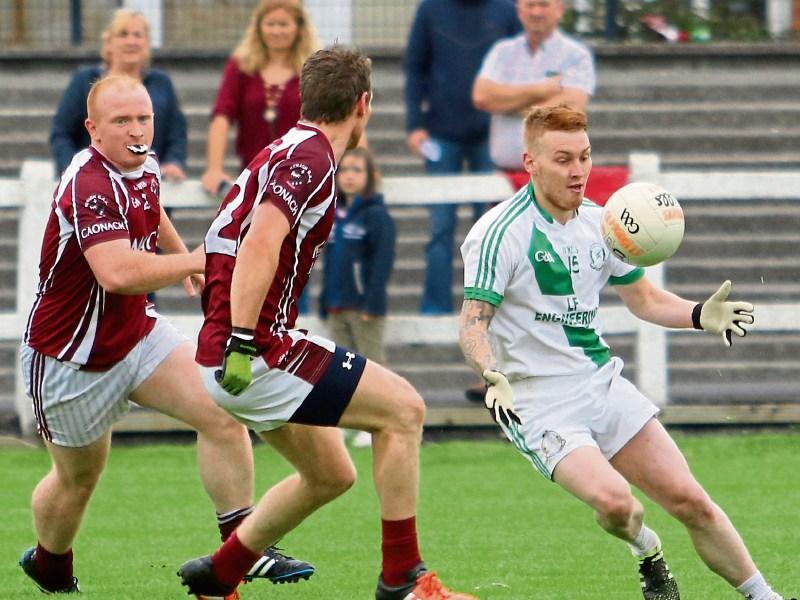 St. Brigid’s Killashee survived a first half scare to eventually beat Kenagh in the second round of the Intermediate Championship at Leo Casey Park, Ballymahon on Sunday last.

Kenagh went in at the break one point ahead thanks mainly to a Thomas McGann goal in the 17th minute. The lead was three by the 33rd minute but then the Killashee side showed their quality with four points in a row to turn the game in their favour.

Without Rory Connor (who is sidelined with a knee injury), Kenagh really put it up to Killashee with Thomas McGann giving the Killashee defence a torrid time.

Kenagh created the first chance of the game in the fourth minute but Shane Doyle’s effort came off the crossbar. Two minutes later Doyle opened the scoring with a free. One minute later Killashee got their first point with a free from Mel Shanley.

Points were traded between McGann and Shanley before Lee Ross Gill hit over an excellent point in the 14th minute. His side then went four ahead in the 17th minute when Shane Doyle set up McGann for the goal.

Willie Skelly replied with a nice point for Killashee but Doyle responded with a good score for his side. Killashee cut the gap to one in the 25th minute with points from Ogie Campbell, Mel Shanley and substitute Michael Farrell.

Down the other end McGann was unlucky not to get a second goal when his effort hit the crossbar and went over for a point. A free from Willie Skelly left it a one point game in the 29th minute.

In first half stoppage time Mel Shanley received a black card as Killashee trailed 1-5 to 0-7 at the break.

One minute into the second half Killashee were unlucky not to have been awarded a penalty when Michael Farrell was blatantly pushed in the area. Kenagh went two ahead in the 32nd minute with a pointed free from Shane Doyle. A free from Brendan Wallace put three between them in the 33rd minute but that was to be their final score for 15 minutes as Killashee took control.

A nice point from Cillian Lee was followed up by a beauty from the impressive Darren Carberry. He then tagged over two more points as Killashee went ahead for the first time. Kenagh full-back Noel Clerkin was lucky not to receive a black card for a foul on Johnny Casey in the 43rd minute.

Killashee were five ahead by  the 46th minute with points from Willie Skelly (two, one free), Francis Dolan (free) and Mark Rossiter. Kenagh cut the gap to two and in the 54th minute Shane Doyle hit the butt of the post in a goal attempt.

Killashee were four in front when Kenagh were awarded a penalty when Johnny Casey was penalised for a foot block (but it was not in the area). Doyle’s spot-kick was saved by St Brigid’s keeper Pat Farrell and then Willie Skelly hit over a point in stoppage time to leave five between them in the end.