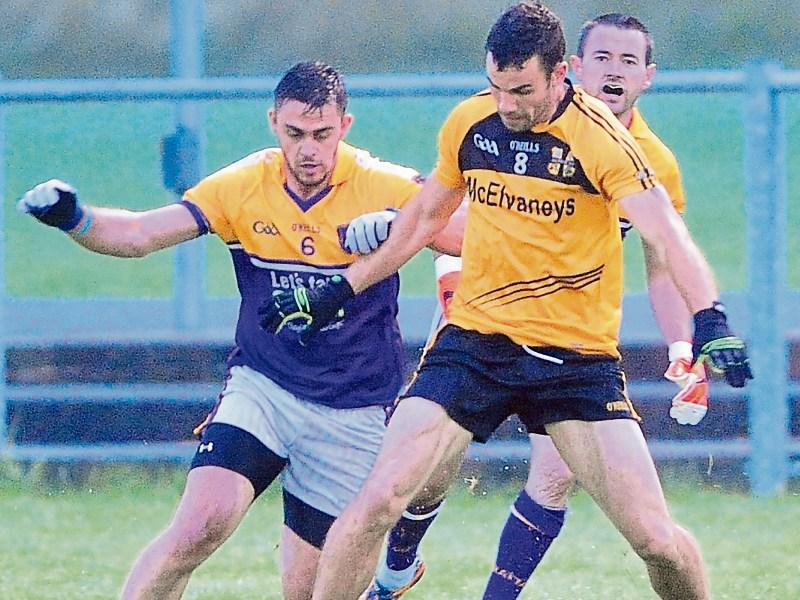 Needing a win to keep alive their hopes of making it through to the Intermediate Football Championship semi-finals, Young Grattans got the result they required in this entertaining encounter with Willie John McDermott landing a wonderful winning point in stoppage time at McGann Park, Kenagh on Friday night last.

Played in difficult wet conditions, Grattans showed a lot of character in producing a very determined display to beat a fancied Ballymore side and can look forward with considerable confidence to their final fixture in Group 2 against Legan Sarsfields.

Ballymore, on the other hand, are facing a very difficult remaining game against unbeaten Sean Connolly’s and may well miss out on a place in the last four. No excuses can be made for this surprising setback and even a gift goal in the closing stages was not good enough to rescue the situation.

Showing the greater will to win, Grattans closed down Bernard McElvaney at almost every opportunity and the former county midfielder failed to make his usual big impact for his club who lost their way after establishing a comfortable 0-4 to 0-0 lead with 18 minutes gone in the first half.

Grattans were guilty of missing a few good chances in the early stages of the game, with Emmet Clarke having a goal attempt deflected narrowly wide, and a dipping shot from Donal McElvaney then caused problems but Ballymore full-forward Pete McNerney was unable to get the vital touch in a bid to flick the ball to the net.

The deadlock was eventually broken in the 13th minute when Gregory Walker shot over the bar and three more points quickly followed from Mattie Gorman, Bernard McElvaney (free) and Damien Monaghan (free) as Ballymore appeared to have established a firm grip on the game.

But Grattans were in no mood to give up the fight and after getting their opening score in the 19th minute through John Hand, a free was then converted by Gerard Victory before Hand went close to scoring a goal when his shot was deflected against the post by the Ballymore keeper Mattie McCrann.

A point apiece (both frees) were then exchanged between Damien Monaghan and Gerard Victory before influential substitute Ian Small sent John Hand racing through for a cracking goal in the 30th minute as Grattans hit the front (1-3 to 0-5) just before the break and it was no more than they deserved after shooting six wides in the first half.

There was still for Ballymore to launch another attack and it almost yielded a goal as a point-blank shot from Pete McNerney was blocked as Grattans keeper Conor Gallagher produced a great save.

Ballymore were back on level terms when Mattie Gorman landed a point with a couple of minutes gone in the second half but Grattans then went on to enjoy a glorious spell that yielded four points in a row through Emmet Clarke, Ian Small, Gerard Victory (free) and David Trappe between the 35th and 42nd minutes.

And to make matters worse for Ballymore they were reduced to 14 players when Donal McElvaney was sent-off in the 39th minute after clashing with Kevin Jones.

Leading by 1-7 to 0-6, Grattans continued to squander chances and had a very lucky escape when a goalbound shot from Pete McNerney was cleared off the line by corner-back Stephen Farrell who was most impressive for the Stonepark side throughout the game.  In this same attack, McNerney fired over a point and after Damien Monaghan converted a free Grattans lost a player when Kevin Jones was sent-off after receiving a second yellow card in the 50th minute.

Moments later Ballymore were denied a goal when Mattie Gorman blasted a shot against the crossbar and things got really exciting when defender Ciaran Fahy surged forward to score a magnificent point to leave just the minimum of margins separating the sides, 1-7 to 0-9.

While Ian Small then kicked a point for Grattans, they suffered a severe setback in the 56th minute when a high ball in from Bernard McElvaney was fumbled over the line by the Grattans netminder Conor Gallagher to concede what was basically an own goal.

That left Ballymore 1-9 to 1-8 in front and seemingly set for the victory that would have put them through to the semi-finals but almost immediately Grattans were on level terms when the always dangerous John Hand shot over the bar.

Bernard McElvaney then kicked two costly wides in a row as Ballymore blew the opportunity of emerging victorious and up stepped the composed Willie John McDermott to kick the winning point for Grattans in the first minute of added time, much to the sheer delight of their loyal supporters.