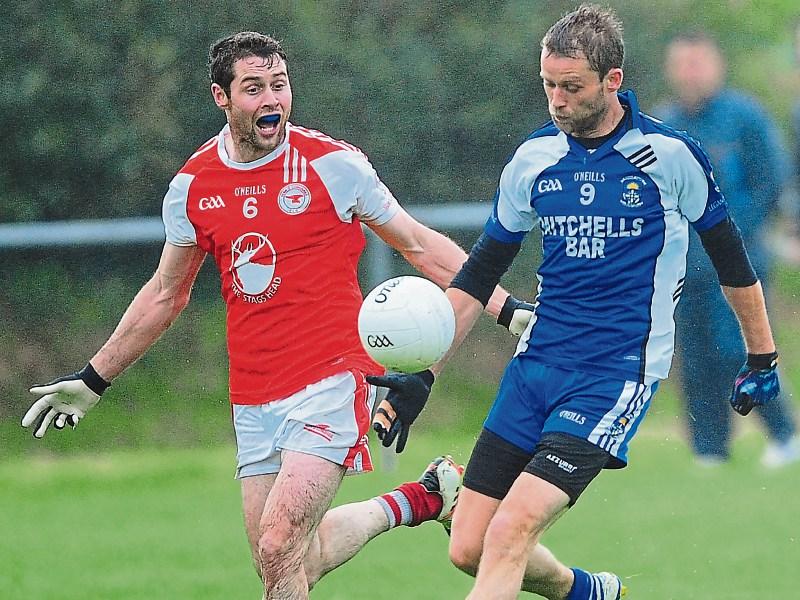 Sean Connolly’s scored their second win in the group stage of the Intermediate Football Championship and most of the damage was done in the first half as they overcame the gritty challenge of Legan Sarsfields at Keenan Park, Ardagh on Friday evening last.

It was the Ballinalee side who handled the conditions better in the poor weather, looking more comfortable on the ball on their way to victory with five points to spare in the finish.

Connolly’s made full use of the wind advantage in the first half as they established a commanding seven points lead by the break, 1-6 to 0-2. Their sharp hands and controlled play were crucial in the greasy conditions and the same could not be said for Legan.

The experience of Stephen Lynch and Ciaran McEoin, as well as the energy of youngsters Daire Duggan, Daniel Collumb and Joe Heaney, were key as Colin Dalton’s side are virtually certain of a place in the semi-finals due to their superior scores difference.

A goal and five points were registered without reply by Connolly’s in the first half before Legan eventually opened their account from a Shane Cox free in the 22nd minute.

Paddy O' Neill started the rout with a point before Daire Duggan's tremendous solo goal. The county minor showcased his fielding skills with a great catch in the middle of the field before driving his way powerfully into the goalmouth and slotting the ball past the Legan keeper Patrick Carthy.

Further scores followed from full-forward Adrian Dalton and wing backs John McKenna and Andy McNamee by the 20th minute and it was all plain sailing for rampant Connolly’s.

A score apiece from Shane Cox and Barry Tierney ended the barren spell for the Sarsfields before Dessie Reynolds converted a free for Connolly’s to bring the first half scoring to a close.

Legan, as they did in their first round encounter against Ballymore, came out a lot stronger on the changeover and only for Joe Heaney's goal for Connolly’s at the beginning of the second half it might have been a different outcome.

Sean Kenny extended the advantage only seconds after the restart and soon after the next Connolly’s goal materialised when Dessie Reynolds's mishit shot fortunately landed in the calm hands of Heaney who kept his composure in placing the ball into the corner of the net.

Great credit to Legan for holding their opponents scoreless for the next 20 minutes and putting up a fight when they easily could have given up. The switch of Conor Quaine to full-forward was influential and along with veteran Paul Ross, the more direct approach began to reap reward for the Sarsfields.

Points from midfielder John Leonard and a tremendous effort from Quaine closed the gap before Legan got a badly needed goal when substitute Noel Cox put a cross into the path of Quaine who punched the ball into the net.

Another Quaine point from a free left 4 between the sides with 5 minutes left on the clock with a predicted good amount of injury time to be played.

But Dessie Reynolds eased the pressure on Connolly’s with their first score in 20 minutes and another point followed from Reynolds to clinch the win.

Despite a second defeat, Legan are still in contention for a semi-final spot but must beat Young Grattans and depend on Ballymore losing to Connolly’s in the hope of getting through on scores difference.