Controversial finish as Killoe hang on to beat Slashers 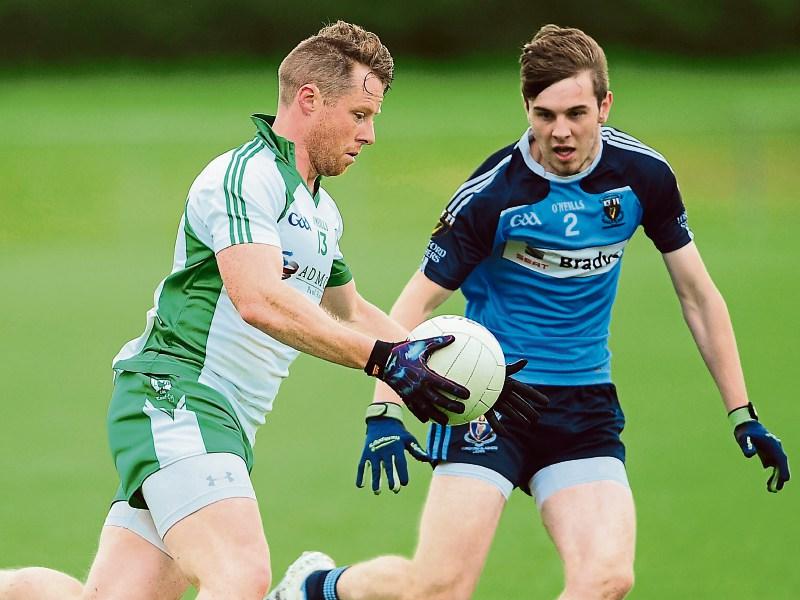 Reigning champions Emmet Og recorded their first win in this year’s senior football championship with a hard fought one point victory over Longford Slashers in the Group 1 game at Lynch Park on Sunday evening last.

The decisive score came in the 59th minute when Sean McCormack hit over his fifth point but there was controversy around it because the Killoe side had 16 players on the field when they got that score. Ryan Moffett had come on but the player he was replacing, Denis McGoldrick, was still on the field of play.

That point had put Killoe ahead by four but Conor Clarke grabbed a goal for Slashers in the first minute of stoppage time to give his side some hope of getting something out of the game. They did look as if they had that chance right at the end after Robbie Clarke appeared to be fouled on the endline but no free was awarded by referee Derek Fahy.

Slashers ended the game with 14 men after Liam Barry was sent off in the 57th minute for something the linesman had spotted.

The win for Killoe was overshadowed by a broken ankle injury to Michael Quinn who had to be stretchered off after he landed awkwardly on his ankle. Another serious injury is something that manager Declan Rowley does not need with forward Mark Hughes out for about six weeks with a broken wrist. The good thing for Killoe is that Sean McCormack is now back after he suffered a wrist injury in the league game against Rathcline.

It was McCormack that got Killoe’s opening score inside the first minute; Simon Kiernan with a perfect ball into Paul O’Hara who laid it off to McCormack and he finished to the net.

Robbie Clarke got Slashers’ first score in the third minute when he pointed. Sean McCormack replied with a point before Clarke was on target again for the Townies.

Sean McCormack (free) and a nice point from Paul O’Hara (who played well throughout) put Killoe ahead by four by the 12th minute. Minutes later Robbie Clarke hit over another point for Slashers and it was all square in the 18th minute when Paul Kelly’s shot eluded Killoe keeper Shane Fitzpatrick who did rush back to try and scramble the ball away from the net but it had already crossed the line.

There then came a torrential downpour but that didn’t deter Killoe and they added three points before the break through Sean McCormack (two, one free) and Denis McGoldrick to give them a 1-6 to 1-3 lead.

The weather improved for the second half but it wasn’t until the 44th minute that the next score came; Sean McCormack setting up Paul O’Hara for a wonderful point and a neat point one minute later from wing-back Shane Dowd left five between the sides. Slashers were finding it hard to get scores with Killoe full-back Padraig McCormack resolute.

In the 50th minute a foul by Peter Brady on Michael Quinn saw him land heavily on his ankle and he was eventually stretchered off. After play resumed Barry Gilleran hit over a wonderful point. With time running out Sean McCormack put his side ahead by five but there was still time for late drama.

Conor Clarke got a goal for his side in the first minute of stoppage time and Barry Gilleran followed up with another excellent point to cut the lead to just one point but Killoe managed to hang on for a narrow win.