Dromard and Mullinalaghta finish all square in tight contest 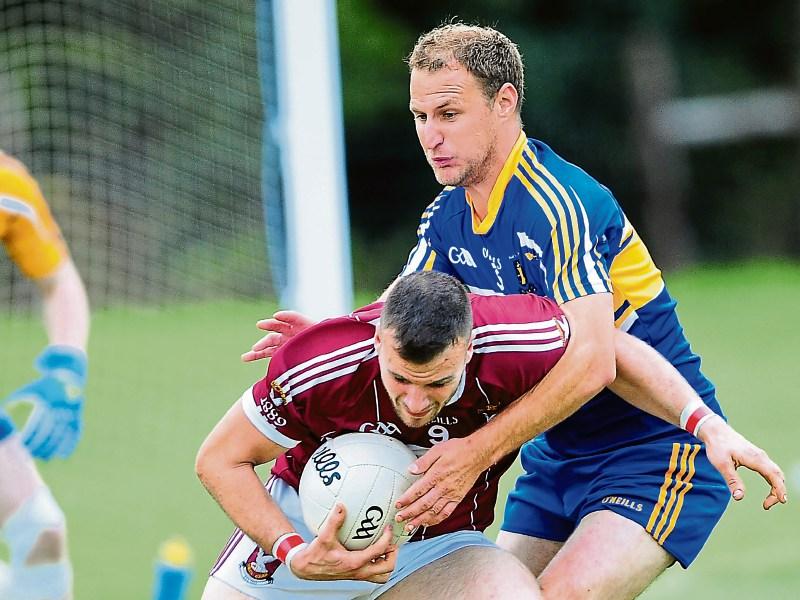 A point from John Keegan in stoppage time earned Mullinalaghta St Columba’s a deserved draw against Dromard in a very entertaining and open game at Higginstown on Saturday evening last.

This result secures a quarter-final spot for Dromard while St Columba’s need to avoid defeat against Colmcille in their final group game on Sunday if they are to advance in the senior championship.

Jamsie Martin’s neat point had put Dromard ahead in the 60th minute but Keegan surged forward one minute later to put his side back on level terms. Three more minutes of stoppage time were played but neither side could get the winning score.

Mullinalaghta got their opening score on the board in the first minute when David McGivney pointed a free after Jayson Matthews was fouled. Dromard drew level two minutes later when Francis McGee curled over a free.

St Columba's then took control and opened up a four point lead by the 19th minute. Matthews got his first point in the fifth minute and two minutes later Aidan McElligott was unlucky to see his effort come off the post.

A lovely move involving Shane Mulligan and James Mooney saw Jayson Matthews hit over his second point in the 10th minute but St Columba’s were dealt a blow in the 12th minute when Rian Brady had to go off injured.

In the 12th minute Matthews hit over a nice free and then in the 19th minute Donal McElligott got on the scoresheet to put his side four points ahead. But Dromard hit back with neat points from Ross McNerney and Emmet Masterson.

Jayson Matthews hit over another fine point in the 28th minute but great scores from McNerney and Cian Mimnagh saw Dromard go in at the break trailing by just one point; 0-6 to 0-5.

A terrific Peter Reynolds point just one minute into the second half drew Dromard level and one minute later a Jamsie Martin free put Sean Hagan’s side ahead for the first time in the game.

Shane Mulligan got Mullinalaghta back on level terms in the 33rd minute but Dromard replied with two points to go two ahead by the 41st minute. The game ebbed and flowed and swung in Mullinalaghta’s favour by the 45th minute when they turned the two point deficit into a two point advantage.

James McGivney hit over two scores  (one free) before the excellent Jayson Matthews was on target again with two more points. Mullinalaghta then hit two wides which proved costly as in the 49th minute Dromard hit the front again thanks to a Ross McNerney goal.

It was all to play for and in the 51st minute Jayson Matthews scored his seventh point when he converted a free to level the game.

And then a fantastic point from James McGivney put Mullinalaghta ahead again in the 56th minute.

Both sides went searching for scores and the game was level again in the 58th minute when the impressive Peter Reynolds curled over a superb point. Minutes later Jamsie Martin hit over a fine point to give his side the lead again as the game entered stoppage time.

The drama didn’t stop there and inside the first minute of stoppage time John Keegan fired the ball over the bar to leave the sides all square for the sixth time.

The final minutes were edgy as both sides tried to keep possession and not make any mistakes and neither could get a further score as the game ended up all square.