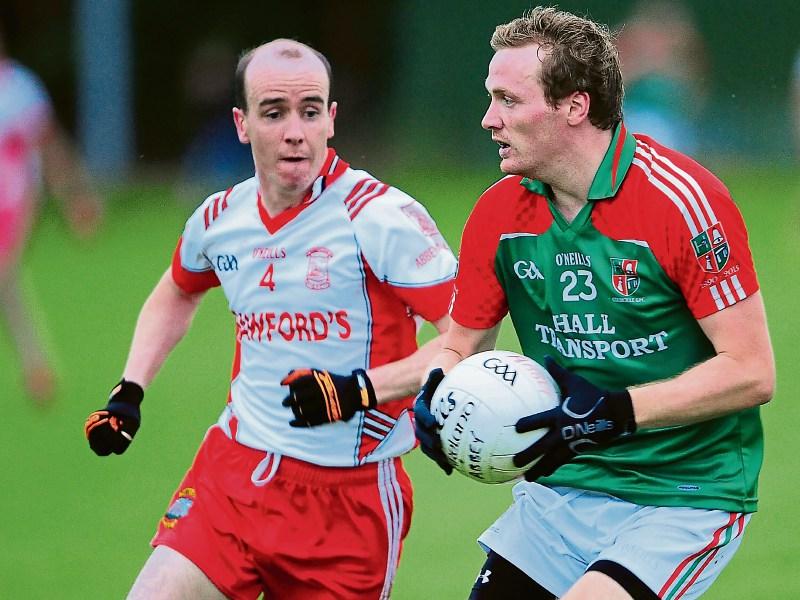 Abbeylara advanced to the quarter-finals of this year’s senior championship with two points to spare over a Colmcille side who were devoid of ideas.

Unlike the first game at the Granard venue on Saturday evening last this match was a poor spectacle. Abbeylara played well though and did find themselves trailing by three points three times in the game. They finished the game with 14 men after Cormac Smyth was shown a straight red card while his brother Colm P was black carded just before that.

After losing in the opening round  to Dromard, Colmcille needed to get something out of this game. Barry McKeon’s early goal kept them in the driving seat until the early stages of the second half but they only scored two points on the changeover; Podgie Murtagh in the 32nd minute and a Barry McKeon free in 53rd minute.

Abbeylara had to start without Robbie Smyth after he sustained an injury in a freak accident before the game but the committed forward came on in the second half to give his side a boost.

Noel Farrell and Jason Kelly traded early frees before Colmcille got the game’s only goal in the 8th minute; Paul McKeon went on a run which opened up the Abbeylara defence and instead of taking a shot he laid the ball off to his brother Barry who palmed the ball to the net. The younger McKeon clattered into the posts while getting the goal but thankfully was able to continue.

A great point from Conor Berry and another from James McEntire brought Abbeylara to within one of Colmcille in the 14th minute. Barry McKeon and Nigel Rabbitte then exchanged excellent points before McKeon added on two more (one free) to give his side a three point advantage again by  the 28th minute.

Rabbitte was on target just before the break to leave two between them; 1-4 to 0-5. Two minutes into the second half Podgie Murtagh surged forward to put Colmcille ahead by three again but that was to be their last score for 21 minutes.

A well struck point from Conor Berry and two Jason Kelly frees had Abbeylara back on level terms by the 38th minute. It was all Abbeylara now and with the momentum they introduced Robbie Smyth in the 40th minute and six minutes later he got his name on the scoresheet when he fired over a free to put his side ahead for the first time in the game.

Abbeylara had chances to extend their narrow lead but failed to do so and in the 53rd minute another Barry McKeon free left Colmcille on level terms. But unfortunately for Ciaran Brady’s side they failed to add to that score as Abbeylara clinched the victory in the final minutes.

Jason Kelly set up Rabbitte in the 56th minute to put Abbeylara ahead again and two minutes later Conor Berry played the ball into Colm P Smyth and the wingback edged his side ahead by two points.

It mattered little as Colmcille had no time to make use of the numerical advantage and they now go into their final group game against Mullinalaghta on Sunday next knowing nothing but a victory can keep them in the championship.