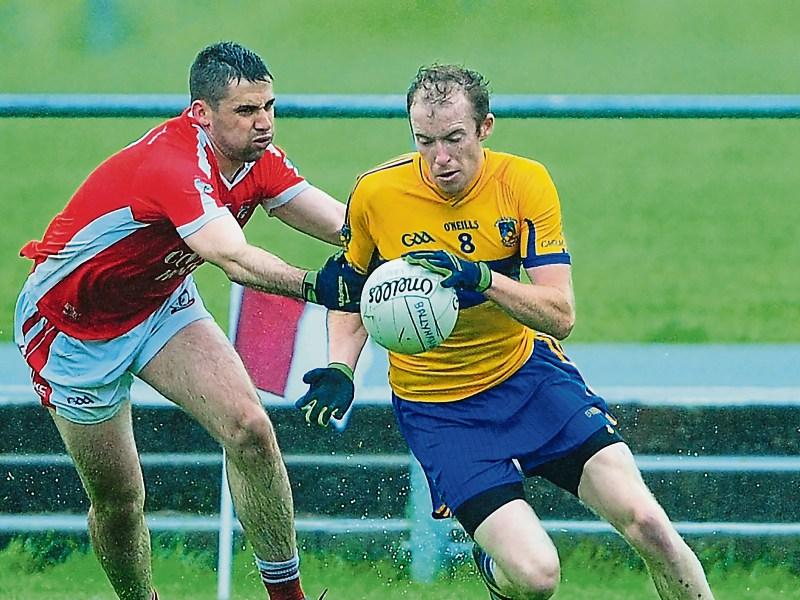 When these two sides met in the senior championship relegation play-off last year Ballymahon claimed a narrow win after extra-time but it was a different story at McGann Park on Sunday last as Carrickedmond emerged victorious by nine points and are now in a good position to claim a place in the quarter-finals.

With a better score difference and having beaten Ballymahon, Carrickedmond go into their final Group 3 game against Fr Manning Gaels on Sunday next knowing that a draw will be enough to get them through to the last eight.

Ger Carberry’s side were full value for their victory against an extremely poor Ballymahon side who lacked any passion or fight. They did kick a number of wides in the first half but only scored one point in those 30 minutes and could only add on two more after the break. Both sides ended the game with 14 men after Kyle Fitzmaurice (Ballymahon) and Rioch Farrell (Carrickedmond) were sent-off.

In difficult wet and windy conditions, Carrickedmond took the game to Ballymahon right from the start and got their first score on the board in the third minute through Jonathan Keegan and he added another point minutes later before Keith McGuire registered his first point. McGuire then hit over his first free in the 13th minute as his side went four points ahead.

Hit by the absence of the injured Pedro Byrne, Ballymahon lived off scraps and any chances they did have they put their efforts wide and the strong wind didn’t help their cause. Marty Mulvey fired over a free in the 24th minute before Joe Kelly got Ballymahon’s first point in the 25th minute. Carrickedmond got the next score, an excellent McGuire point, to hold a 0-6 to 0-1 lead going in at the break.

Joe Kelly got a second point for Ballymahon in the 36th minute but they had to wait another 22 minutes before they got their next score. A free from the boot of Keith McGuire was Carrickedmond’s first score in the second half and that came in the 41st minute.

Things got even better for Carrickedmond in the 43rd minute when they extended their lead to eight points; a free from McGuire caused problems in the Ballymahon goalmouth and substitute Conor Kelly got the vital touch to finish the ball to the net.

Ballymahon were stunned and could not find a way of getting back into the game, any time they had possession and played it into the forward line Carrickedmond’s defence were resilient with Oisin Farrell and Michael Cahill impressing while full-back Kevin Moran was a real leader.

Another free from Kerith McGuire gave Carrickedmond a nine point lead in the 47th minute. Then a challenge by Kyle Fitzmaurice on Oisin Farrell in the 55th minute led to a fracas with Fitzmaurice and substitute Rioch Farrell both shown straight red cards; Farrell had just been on the pitch a few minutes.

Mark Connor hit over a late free for Ballymahon in the 58th minute and the final score of the game was another Keith McGuire free in stoppage time as Carrickedmond ran out emphatic winners and are now just one step away from a quarter-final spot.