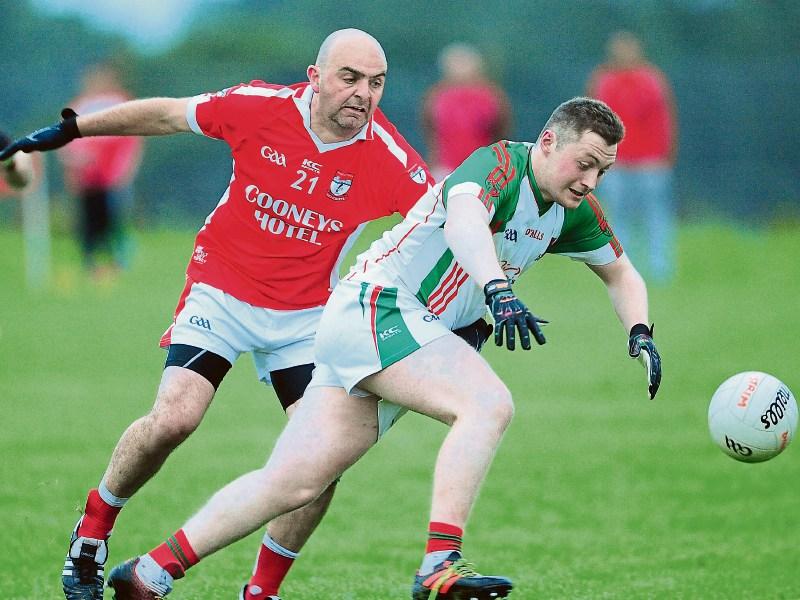 Just when it seemed that Mostrim had done enough in their efforts to win the game as they held a three points lead going into stoppage time, Ballymahon grabbed a late lifeline when a Mark Connor free into the heart of the goalmouth was flicked on by Colm Flynn and the ball ended up crossing the line for the equalising score.

Taking into account the many chances they squandered with the aid of the stiff wind in the second half, Ballymahon deserved to earn a draw in the Senior Football Championship Group 3 clash played in difficult conditions at Moran Park, Carrickedmond on Wednesday evening, August 3, and showed a lot of spirit to get something from the game.

In winter like weather amid the wind and some rain, Mostrim had the advantage of the elements in the first half but it was Ballymahon who made the better start only for Colm Flynn and Eddie Noonan to kick a wide apiece from frees.

While the Edgeworthstown outfit, missing key players Cillian Lynn (injured) and Seamus Hannon (away on holidays), opened the scoring in the 6th minute when a dipping shot from Shane Kiernan was parried over the bar by the opposing keeper James McCormack, there was an immediate response from Ballymahon with Pedro Byrne surging forward to fire over a very good point.

Ambrose McGowan’s side (without the unavailable Adrian McLoughlin on this occasion) took the lead in the 8th minute when Colm Flynn converted a well struck free but Mostrim gradually got their act together to land three excellent scores in a row through Darragh Doherty, Brian Farrell and Shane Kiernan between the 14th and 19th minutes.

A point apiece was then exchanged between Flynn (free) and Farrell (well struck ‘45) before Flynn was on target again from another free in the 27th minute to close the gap to the minimum of margins.

A strong finish to the first half yielded a couple of more Mostrim points, a cracking effort from Luke Kelly while Brian Farrell (put through by Michael Hussey) blasted the ball over the bar when a goal was there for the taking in stoppage time.

That left Jack Lynn’s charges leading by 0-7 to 0-4 at the break and the advantage was extended when Brian Farrell sent Niall Quinn racing through for a fine point with a couple of minutes gone on the changeover.

Both sides then suffered setbacks with Pedro Byrne (Ballymahon) and Shane Kiernan (Mostrim) forced to retire injured and it was looking good for Edgeworthstown when Michael Hussey converted a free in the 38th minute to leave his side five points in front.

But Ballymahon battled back with a brace of points from Joe Kelly, along with another score from a Colm Flynn free, and that was really putting it up to Mostrim who had a very lucky escape in the 56th minute when Alan Hudson (put clean through after collecting a centre from Emmet Finn) shot straight at the opposing keeper Ciaran Garvey who did well to keep his net intact.

The pressure was eased on Edgeworthstown moments later when Brian Farrell converted a close range free but never-say-die Ballymahon just refused to accept defeat. And their perseverance was rewarded when Colm Flynn got the vital touch as the late, late goal materialised to leave the sides all square at the final whistle with substitute Edwin Nally also in the subsequent scramble as the ball ended up in the net.

When you consider that Ballymahon were guilty of kicking 13 wides, as compared to seven for Mostrim during the course of this scrappy encounter, a draw was probably the fairest result.