Far too easy for Mostrim as Fr Manning Gaels outclassed 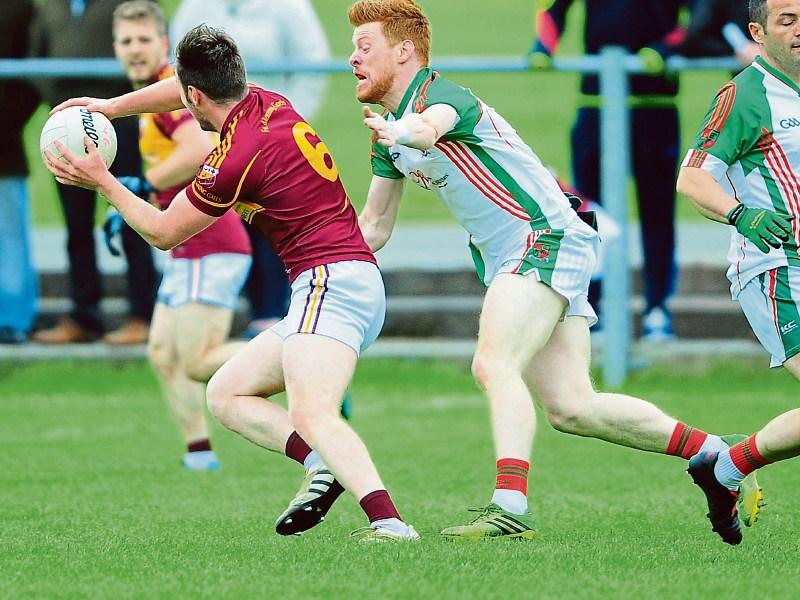 It was far too easy for Mostrim, heading for the quarter-finals of the Senior Football Championship, as they crushed the poor challenge of Fr Manning Gaels who sorely missed the suspended Padraig Gill  in the Group 3 clash at windswept McGann Park, Kenagh on Sunday last.

The much sharper Edgeworthstown side were superior in most positions on the pitch, and particularly so at centrefield where Brian Farrell was the dominant figure. Having said that, the Gaels were in contention for most of the first half but suffered a severe setback when Farrell fired home a cracking goal in the 24th minute following a well-worked move.

That crucial score left Jack Lynn’s charges in a comfortable 1-5 to 0-2 lead despite kicking a number of wides and it could have got even worse for the Drumlish/Ballinamuck outfit moments later as Michael Hussey got through for another goal chance but he shot wide from close range.

A terrific point followed from Cillian Lynn and after the Gaels were denied a badly needed goal when a shot from Dean Cosgrove hit the post, it was the turn of Mostrim midfielder Fintan Coyle to get his name on the scoresheet when he surged forward to shoot over the bar in the third minute of stoppage time.

Michael Hussey opened the scoring for Mostrim in the 2nd minute of the game and four more Mostrim points followed from Hussey, a brace from Brian Farrell (free and play) and Seamus Hannon to leave them leading by 0-5 to 0-2  before the goal materialised.

Eoin Keane (free) and Darren Farrelly got the scores for the Gaels, who ended up trailing by 1-7 to 0-2 at the break, and things went from bad to worse in the second half as they crashed out of the championship.

In producing their best display so far in the current Connolly Cup campaign, Mostrim made a strong start to the second half with a point apiece from Brian Farrell, Michael Hussey (free) and Darragh Doherty in quick succession before David Collum got through to land a score for the Gaels in the 42nd minute.

Moments later, they grabbed a goal when Eoin Keane set up substitute Petie Collum and his point-blank effort ended up in the net despite a last ditch attempt by Mostrim defender Ciaran Gallagher to clear the ball off the line.

The gap was now down to nine points (1-12 to 1-3) but that proved to be nothing than a consolation as Fr manning Gaels failed to register another score during the remainder of the match.

Mostrim cruised to a most emphatic victory in adding another 1-6 to their tally with Darragh Doherty getting the goal in the 56th minute. Michael Hussey, one of the stars in Longford’s Leinster Minor Championship success back in 2002, fired over another three points (two frees) and is playing his best football for quite some time.