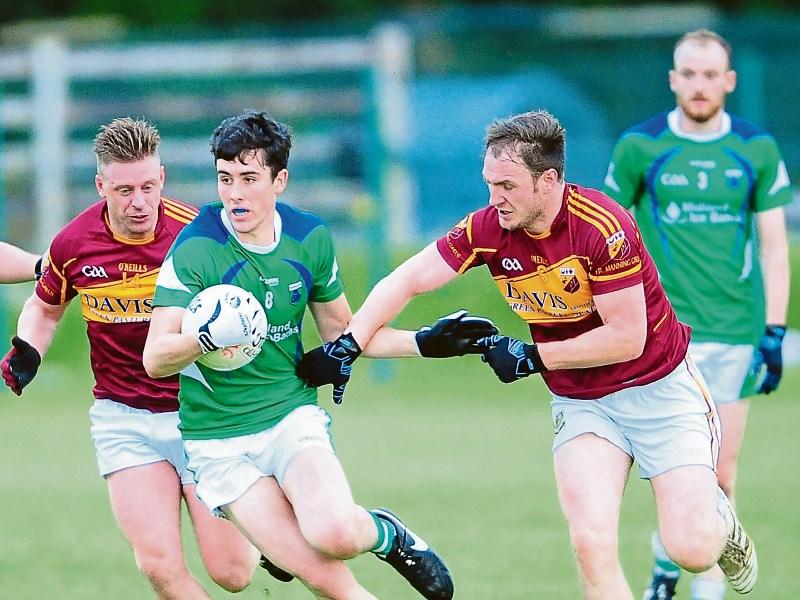 The GAA followers around the county can say what they like about the somewhat controversial composition of the ‘lesser’ Group 3 in this year’s County Senior Football Championship but it is producing some competitive games with Fr Manning Gaels pipping Rathcline by a point in the  Round 3 clash at Dunbeggan Park.

A small crowd gathered at the Grattans grounds on Tuesday evening of last week to witness a very entertaining encounter, the highlight of which was a most exciting finish. Darren Farrelly kept his composure to land a last gasp winning score with virtually the final kick of the game in stoppage time - a result that will  relegate Rathcline straight back to the Intermediate grade as they suffered their third defeat in the current Connolly Cup campaign.

That sweet strike by Farrelly completed a great comeback by the Gaels, who appeared to be in considerable trouble when they trailed by 0-7 to 0-1 after Shane Kenny converted a free in the 23rd minute of the first half.

Adding further to the woe of the Drumlish/Ballinamuck outfit was the straight red card for one of their key men Padraig Gill, who was sent-off for retaliation following a tussle with Rathcline opponent David Rooney who was branded with a yellow card for his part in this brief fracas.

Persistent fouling on Gill right from the start of the game proved very frustrating for the Gaels centre-half-forward who eventually lost his cool but the numbers were evened up when Rooney was penalised for a black card offence with six minutes gone on the changeover and also saw red on the back of his booking in the first half.

So with Rathcline also reduced to 14 players the balance of power gradually swung in favour of Fr Manning Gaels, who showed tremendous spirit to rescue the situation after closing the gap to trail by just three points at the break, 0-8 to 0-5.

Having said that, Rathcline created a couple of clear-cut goal chances when both Shane Kenny and James Hanley shot over the bar and Kenny was particularly impressive in the first half in firing over a total of four points (one free), including a terrific effort from play.

The other scores for the shannonsiders in the first half came from Iarla O’Sullivan, James Carroll and Hanley (free) while on target

for the Gaels were Petie Collum (2), Dean Cosgrove (2) and wing back Mark Duffy with David Cassidy having a goal attempt blocked on the line in the 19th minute.

The introduction of powerful defender Aaron Quinn (back in action after injury ruled him out for a couple of months) in the closing stages of the first half made a big difference as the Gaels came storming back while another substitute Martin Cassidy also figured prominently.

Cassidy landed a point and also scored a crucial goal in the 48th minute to leave his side leading by 1-10 to 0-10. The other four scores for the Gaels in the third quarter of the contest included a brace from impressive defender Eoin Keane (free and ‘45’) with Darren Farrelly and Dean Cosgrove also on target.

James Hanley (free) and Shane Kenny (free) replied for Rathcline, who were finding the going tough against the wind in the second half, but the Gaels lacked the killer instinct to finish the opposition off.

A point apiece were exchanged between Aaron Madden (free) and Farrelly with ‘Chippy’ very much the main man in the Gaels attack as it was his perfect pass that put Martin Cassidy through for the goal.

Rathcline got back on level terms in the 55th minute when Shane Casserly flicked the ball to the net after the opposing keeper Anthony Kane done well to save a shot from Kevin Sorohan.

Sorohan was prominent throughout the game with James Carroll also much to the fore for the gallant losers who are managed  by former Fr Manning Gaels footballer Colin Hannify.

The Gaels regained the lead when Eoin Keane converted a close range free in the 58th minute, only for Shane Kenny to fire over a cracking equalising point in the second minute of stoppage time, and it looked like the game was going to end in a draw.

But there was still time for the Gaels to snatch a win as they engineered one more attack that ended up with Darren Farrelly getting through for a great point and it must be said that the former county minor (winner of a Leinster Championship medal in 2010) made a major impact for his club on this occasion.