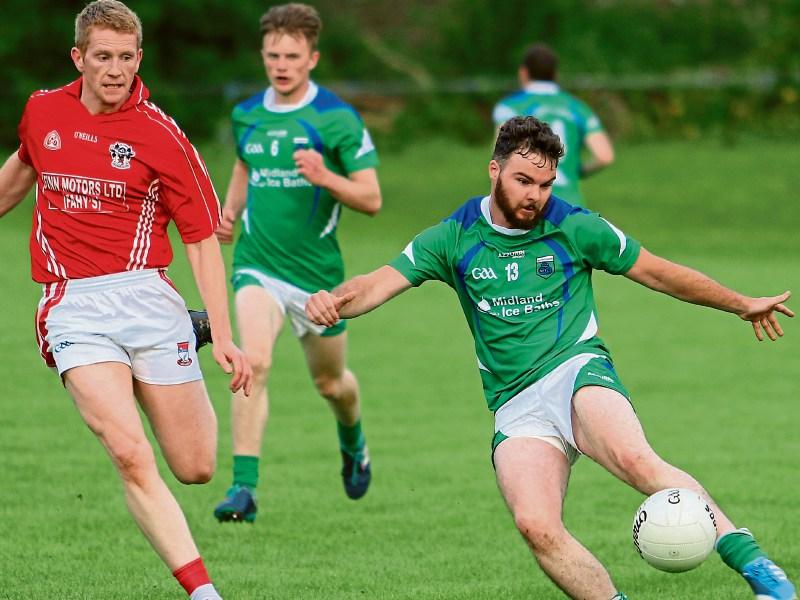 While Ballymahon registered their second win in Group 3 of the Senior Football Championship to remain on course to qualify for the quarter-finals thanks to a late point from a Colm Flynn free, they were rather fortunate to come out on top in the finish as Rathcline staged a rousing revival in a most entertaining second half at Pairc Chiaran, Newtowncashel on Friday evening last.

Goals from Pedro Byrne and Eddie Noonan in the space of sixty seconds put Ballymahon in a commanding lead with just nine minutes gone on the clock and it looked all over as a contest when Ambrose McGowan’s side ended up 2-10 to 0-6 ahead at the break.

Byrne raced through to plant a cracking shot in the back of the net and moments later Noonan scored the second goal from a few yards out after receiving the perfect pass from Kyle Fitzmaurice. Ballymahon played really well in the first half, firing over some excellent points, the highlight of which was a brilliant Eddie Noonan strike from a very tight angle.

The influential Noonan also shot over the bar in the early stages of the game while the other eight Ballymahon points in the first half came from Mark Connor (2), another brace from Fitzmaurice (play and ‘45) with Colm Flynn (free), Kevin Diffley, John Nevin and Joe Kelly also on target.

Rathcline were struggling in most positions on the pitch in the first half with Aaron Madden accounting for three scores (two frees) while James Hanley (free), Iarla O’Sullivan and Shane Kenny (‘45’) were also on the mark for the shannonsiders who missed a great chance of a badly needed goal in the 16th minute when Kevin Chapman directed a shot narrowly wide.

Things could only get better for Colin Hannify’s charges in the second half and they went close to getting a goal immediately on the changeover when Shane Kenny had his effort blocked. A point apiece were then exchanged between Colm Flynn (free) and the lively Iarla O’Sullivan before Joe Kelly landed a great score for Ballymahon in the 40th minute after receiving a crossfield pass from Eddie Noonan.

That left Rathcline trailing by 11 points (2-12 to 0-7) but they then enjoyed a glorious spell that yielded 2-2 in the space of just three minutes. Centre-half-back Kevin Sorohan shot to the net and then Derek Casserly kicked over a point before letting a long ball into Shane Kenny who got the vital touch to flick home a second goal.

James Hanley then converted a free in the 43rd minute to close the gap to just three points but the pressure was lifted on Ballymahon when the impressive Eddie Noonan hit over two terrific points in quick succession.

But the tactic of sending the ball directly into the effective target man Shane Kenny at full-forward was working well for Rathcline and he grabbed another goal in the 49th minute to put his team right back into contention.

While Mark Connor replied with a great score for Ballymahon, back came Rathcline to fire over three points in a row through James Carroll, Kevin Sorohan and James Hanley (free) that left the sides all square with time running out.

A draw was looking the likely outcome at this late stage but Ballymahon went back in front when Colm Flynn converted a free from a tight angle in the 59th minute and that proved to be the winning score. Rathcline had a couple of chances to level matters but Shane Kenny was off target from a long range free and a difficult sideline kick.