Connollys get their act together to beat Grattans 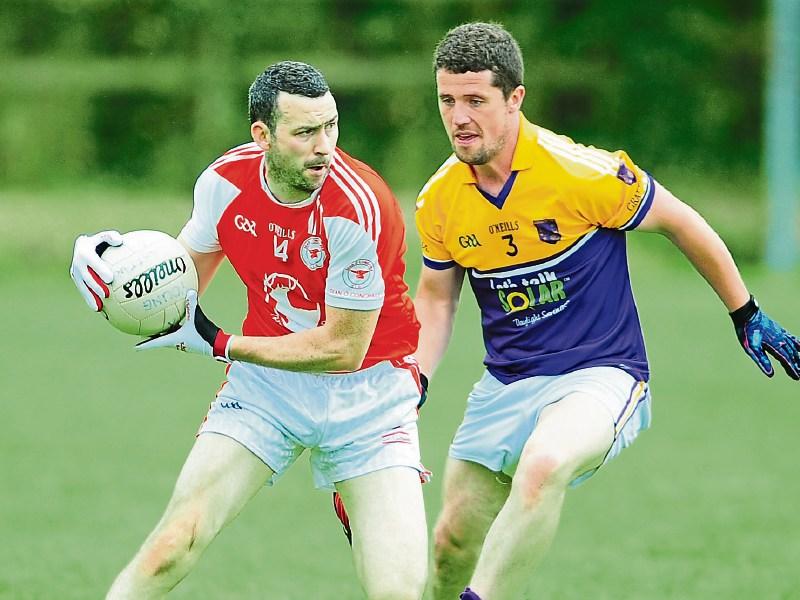 Trailing by four points with five minutes gone on the changeover and after kicking a number of wides in the first half, the signs did not look great for Sean Connolly’s but two goals in the space of six minutes changed the game very much in their favour against Young Grattans.

Connolly’s were the better team throughout this Intermediate Football Championship first round clash at Emmet Park, Killoe on Sunday last but they were guilty of being wasteful in the first half and because of this Grattans punished them. The Stonepark outfit also kicked a number of poor wides themselves in the first half but still were able to lead by two points at the break, 0-6 to 0-4.

It wasn’t a great spectacle but Connolly’s showed glimpses of how good they could be.  As the game went on Dessie Reynolds really came into the game and was instrumental in both goals. Substitute Joe Heaney also played well when introduced while John McKenna and Stephen Lynch played their part in this fine win.

Both sides got early points on the board before Connolly’s went ahead by two in the 9th minute. A free from Gerard Victory and a lovely point from Ian Small drew Grattans level by the 21st minute.

Small then hit over another fine point in the 22nd minute to edge Grattans ahead for the first time in the game.

John McKenna levelled for Connolly’s with a nice point in the 23rd minute but Grattans ended the first half well and tagged on two more points to lead by 0-6 to 0-4 at the  break.

Two good points from John Hand extended Grattans lead to four points by the 35th minute. Connolly’s were badly in need of a score and got a point in the 36th minute through Paddy O’Neill; their first point in 13 minutes of play.

Connolly’s cut the gap to two in the 37th minute but a free from Hand put Grattans in front by three in the 42nd minute. One minute later and the game swung in Connolly’s favour when they got their first goal through Trevor Murtagh.

Buoyed by that crucial score a Dessie Reynolds free edged them in front in the 44th minute. Emmet Clarke levelled for Grattans but that was the closest they were going to get to their opponents as Connolly’s began to dominate and get more vital scores on the board.

A Stephen Lynch free put the Ballinalee side back in front in the 49th minute and less than one minute later Trevor Murtagh was on target again, getting his and his side’s second goal. Joe Heaney added on a point to stretch the lead to five points in the 51st minute.

Dessie Reynolds hit over a fine effort before Gerard Victory (free) got Grattans last point of the game. Connolly’s fired over two points near the end to seal a well deserved win.