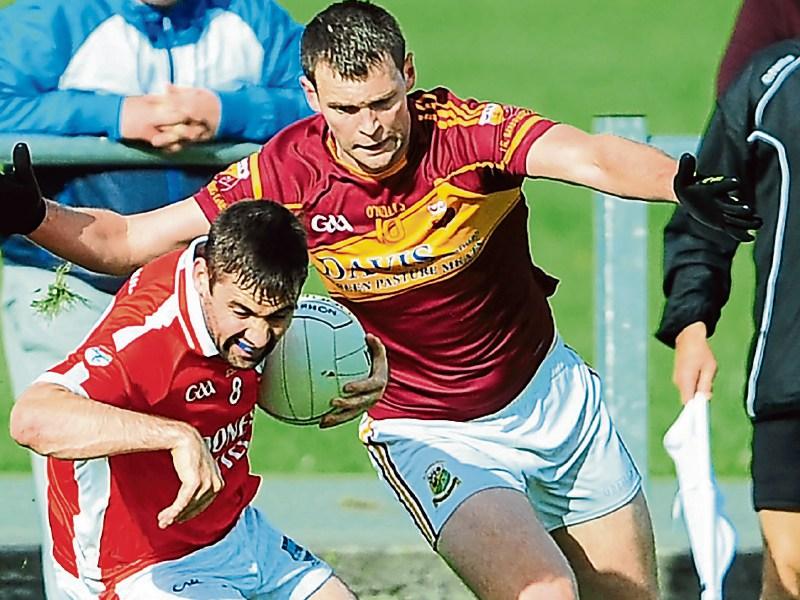 Two first half goals from Kyle Fitzmaurice proved crucial as Ballymahon got their senior football championship campaign off to a winning start when they got the better of Fr Manning Gaels in the Group 3 clash at McGann Park in Kenagh on Sunday evening last.

Fitzmaurice’s first goal in the 12th minute brought Ballymahon back into the game when they were four points behind while the second one levelled matters in the 25th minute. A pointed free from Colm Flynn in first half stoppage time put Ballymahon ahead for the first time and they didn’t relinquish that lead.

The Gaels came within one of Ballymahon midway through the second half but they just couldn’t get the equalising score.  Ambrose McGowan’s charges began to show their superiority on the scoreboard as the second half went on and the Gaels simply had no answer.

The game was played in a good spirit by two committed sides. Ballymahon improved as the game went on and looked good when they threatened and had players that could cause damage, Kyle Fitzmaurice and county minor star Joe Kelly, while the experienced men around the pitch also played their part in this win.

The Gaels made a great start to the game and in the 6th minute raised the green flag when Dean Cosgrove rifled his shot to the net and then a pointed free from Eoin Keane put them ahead by four one minute later.

Colm Flynn (free) got Ballymahon’s first score on the board before Mickey Kelly hit over a good score for the Gaels. In the 12th minute the gap was just one point; Pedro Byrne raced through and found Kyle Fitzmaurice and he lobbed the ball over opposing keeper Anthony Kane - replacing Paddy Collum who is currently in the United States.

Points were traded between Eoin Keane (free) and Kyle Fitzmaurice before Gaels went in front by three twice in the space of three minutes. In the 25th minute the game was level when Fitzmaurice got his and his side’s second goal. Colm Flynn pointed another free deep into first half stoppage time to put Ballymahon ahead for the first time going in at the break, 2-4 to 1-6.

Two Flynn points in the early stages of the second half put a goal between the sides by the 36th minute before the Gaels got a much needed point in the 40th minute when Kevin Whelan shot over the bar.

Fr Manning Gaels player David Cassidy was then black carded (43rd minute) before his side cut the deficit to one point in the 44th minute but Ballymahon responded with two well taken points from the boot of Joe Kelly.

Darren Farrelly replied for the Gaels before Ballymahon’s Eddie Noonan was shown a black card (53rd minute). Soon after Pedro Byrne pointed to put three between the sides again.

Ballymahon were dominating the game and the Gaels were finding it hard to make an impact. It was a two point game in the 56th minute when Darren Farrelly was on target again with a fine point for the Drumlish/Ballinamuck side but they failed to register another score as Ballymahon finished the stronger.

As the clock ticked down Ballymahon kept on pressing for scores and in the 60th minute they very nearly got their third goal. Kyle Fitzmaurice played the ball into Mark Connor who found substitute Edwin Nally and he tried to round Anthony Kane but the Gaels keeper pulled off an excellent save.