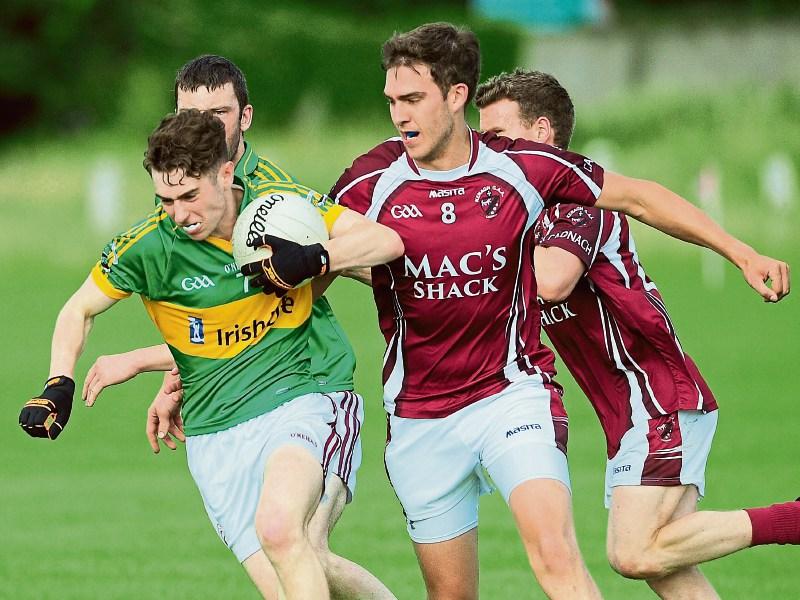 Ardagh St Patrick’s/Moydow Harpers crushed the challenge of Kenagh in the first round of the Intermediate Football Championship played at Leo Casey Park in Ballymahon on Saturday evening last, winning by the landslide margin of 20 points.

The highly energetic amalgamation clocked up a cricket score in this impressive display against Kenagh who were missing county players Rory Connor and Shane Doyle due to suspension.

Youth excelled on both sides with Daryl Carrigy, Conor Carroll and Oisin Mac an Bheatha most prominent for Ardagh/Moydow while minors Thomas McGann and Lee Ross Gill seemed to be the only outlet for a Kenagh score.

Lee Ross Gill swapped scores with Daryl Carrigy and Paddy Ganley in the early minutes and even when Mark Quinn caught Kenagh keeper Anthony McCormack off his line for a goal after 10 minutes, Kenagh replied quickly with two great scores from Thomas McGann despite playing against the wind in the first half.

It wasn't until Mark Quinn's second goal that Ardagh/Moydow really began to take over and his sublime effort was followed by points from Daryl Carrigy and Paddy Ganley.

Before Kenagh could even get a chance to create a score, Ardagh/Moydow had another six points on the board, Daryl Carrigy and Ryan Higgins slotting over from play while the excellent Paddy Ganley added to his first half tally with four more scores.

Thomas McGann closed out the first half with two nice efforts for Kenagh, who trailed by 2-12 to 0-6 at the break and the game was all over as a contest.

Kenagh added a further 1-2 to their final tally in the second half, all of which materialised in the first 10 minutes. Lee Ross Gill hit his third point straight after the restart followed by Alan Jones punching the ball to the net from a free. But the quick movement and alertness of Ardagh/Moydow was highlighted most in their next play with sharp distribution and slick play that resulted in a goal for Daryl Carrigy.

Carrigy finished up with 1-4 to his credit, showcasing a fine game for the attacker who was playing soccer for Longford Town not so long ago.

Kenagh heads began to drop after this and when Lee Ross Gill was sent off with 15 minutes still to play it signalled a shooting practice for Sean Pearson's well drilled side.

Scores from Paddy  Keenan, Mark Quinn and the deadly accurate Paddy Ganley (3) completed the demolition job for the assured Ardagh/Moydow outfit and on the evidence of this most emphatic victory will be hard beaten in their quest to capture the county intermediate title with their combination of  speed, intensity and finishing.

The Moydow contingent of Mark Quinn, Daryl Carrigy and Ryan Higgins were pitted in the  full-forward-line and between them clocked up 3-9, proving the talent that they have added to this already good side.

Kenagh will need serious improvement for their next game against St Brigid’s Killashee in their need to win their remaining two fixtures in Group 1 to be in with a chance of reaching the semi-finals.