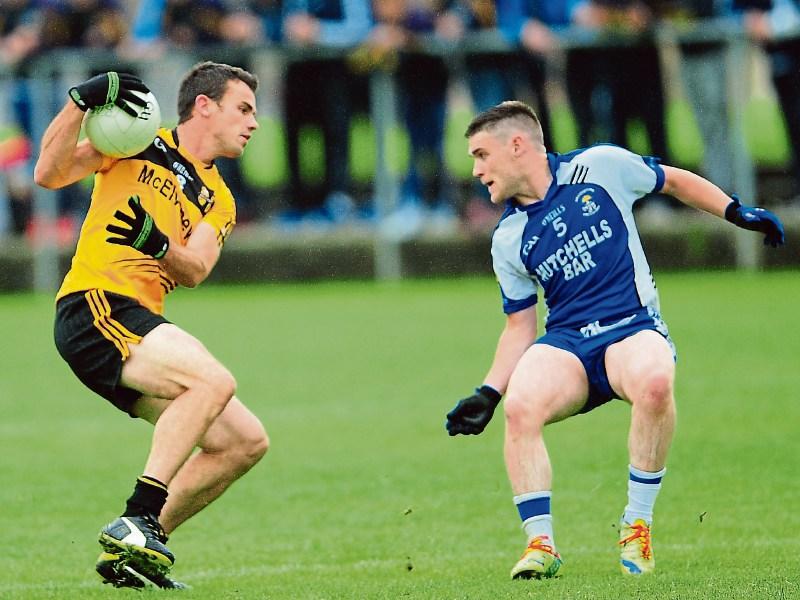 While Ballymore scored their expected win in the opening round of the Intermediate Football Championship at Emmet Park, Killoe on Sunday last they had to withstand a gallant comeback by Legan Sarsfields with just the narrow margin of two points separating the sides at the final whistle.

Powered by Bernard McElvaney at midfield, Ballymore appeared to be cruising when they held a commanding 1-9 to 0-3 lead at the break with Mattie Gorman firing home the crucial goal in the 27th minute immediately after the Sarsfields keeper Eddie Martin had produced a fine point-blank save to prevent Pete McNerney from finding the back of the net.

There was just no stopping McElvaney, who clocked up six points (two frees) in the first half with the other Ballymore scores coming from Mattie Gorman (2) and Pete McNerney, the latter on target in the opening minute of the game, but they had a lucky escape when Legan wing back Stephen Doherty shot wide when a goal was there for the taking in the 14th minute.

Paddy O’Neill landed a brace of points (both from play) for Legan, who were hit by the absence of injured duo Barry Tierney and Conor Moran, while Conor Quaine converted a free. And the Sarsfields suffered a further setback when Quaine (another of their key players) was dismissed right at the start of the second half after receiving a black card.

Moments later Ballymore extended their advantage with a point from Donal McElvaney and it looked like a lost cause for Legan. But they gradually closed the gap with the aid of the stiff wind on the changeover and veteran Paul Ross providing the inspiration for a gritty revival.

After kicking over a couple of points, Ross also grabbed a goal in the 44th minute to leave a rather rattled Ballymore outfit in a slender 1-10 to 1-7 lead. Shane Cox accounted for the other two Legan scores (play and free) and another point followed from a free converted by Adam Doherty in the 48th minute.

The pressure was lifted on Ballymore when Bernard McElvaney slotted over a close range free in the 50th minute to leave his side 1-11 to 1-8 ahead. And while Stephen Doherty replied for the Sarsfields with a well struck long range point, McElvaney followed up with two more scores to bring his total to a most impressive 0-9.

Substitute Joseph Murphy and Adam Doherty (free) replied for Legan but Ballymore had done enough to get their championship campaign off to a winning start, despite the struggle in the second half, and are on course for a place in the semi-finals with their next game against Young Grattans in mid-August.

Legan, on the other hand, now face a must win fixture against Sean Connolly’s and the odds are stacked against the Sarsfields in their slim hopes of qualifying from Group 2.