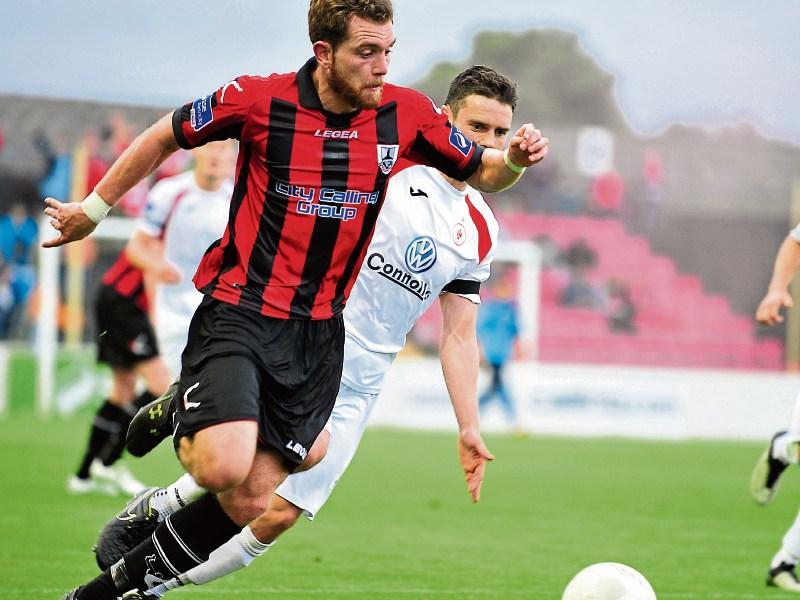 After a run of four defeats, Longford Town picked up what could yet prove to be a precious point in the draw against Sligo Rovers at City Calling Stadium on Saturday night last.

In front of the official attendance of 810, the determined Town side came from behind twice to halt a damaging losing sequence in the league and a win at home to Galway United on Saturday night next will be a big boost in the fierce battle to avoid relegation from the Premier Division.

Right at the end Sligo created a chance to snatch a dramatic last gasp winner but Daniel Kearns directed his shot wide, much to the relief of the loyal Longford supporters.

Speaking to the Leader after the game Town manager Tony Cousins said his side deserved the result: “I kept saying to the players you only get luck when you deserve luck. If you keep working hard you make your own luck. I thought  that the players deserved the draw for the effort that we put into the game and we need to build on that now. You could feel the upbeat mood in the dressing room after the game and there’s a bit more confidence.”

The Town started brightly and although they enjoyed possession they didn’t create anything to trouble the opposing keeper Michael Schlingermann.

Sligo’s first chance in the 31st minute yielded the opening goal. A pinpoint cross from the left by Liam Martin met the head of Raff Cretaro who rose high to direct the ball past Town keeper Ryan Coulter.

Cousins was not pleased with the manner in which his side conceded the first goal: “The first goal was disappointing. It was a replica of a couple of goals we conceded against Dundalk. It’s not easy when you are struggling in any sport and confidence plays a major role. But you come back with performances like this when you do things right and get rewarded.”

Three minutes before the break, Longford Town drew level when Kaleem Simon’s corner fell to defender Rhys Gorman and he made no mistake with a well struck effort from close range.

Sligo went back in front again in the 53rd minute; Town defender Noel Haverty fouled Liam Martin in a dangerous position and Phil Roberts found the back of the net with a perfectly executed free-kick.

Longford tried hard to get back into the game and in the 61st minute Yann Mvita Nkelu headed Kealan Dillon’s corner just wide. 14 minutes later the Town were on level terms again when a poor clearance by Sligo defender Gary Boylan fell to Eddie Dsane and he directed the ball past Schlingermann for his first goal for the club on his home debut.

Cousins praised new signings Dsane and Mvita Nkelu’s contribution to the positive result: “For Yann and Eddie it’s kind of their pre-season period. They are only really starting to find their feet. They will only get better with games under their belt. They have given us real positives since coming in.”

The Town then pressed for a winning goal; in the 86th minute defender Noel Haverty should have done better with his header which went over the bar while in the 90th minute Lee Duffy got in Dsane’s way as both players went for the ball in front of the posts.

Tony Cousins paid tribute to the Town supporters who played their part in the result: “The supporters were brilliant. From the time we walked out of the tunnel they got right behind the players. When you are stuck down there in a relegation battle it can be a frustration for the fans and I understand that more than anybody. Great credit goes to them for the vital role they played in providing the inspiration for the important point we got from the game.”