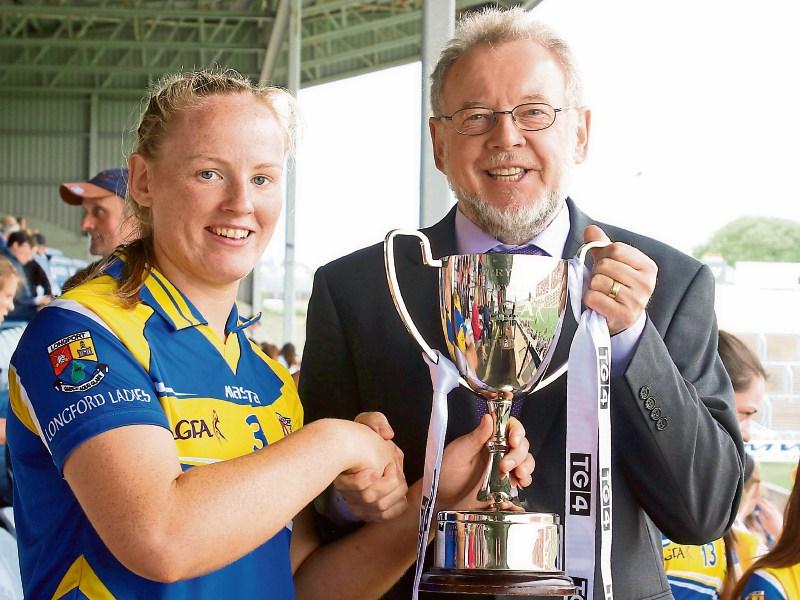 This was a game that the Longford ladies were always going to win against extremely poor opposition and they were relentless in attack as they claimed the Leinster Junior Football title at O’Moore Park in Portlaoise on Sunday last.

Despite the very weak Carlow challenge, it must be said that Longford put in a fantastic performance in the final as their defence were solid, midfield won most of the ball while the attack were ruthless and clinical.

Longford registered their opening point in the 2nd minute; Mairead Moore made the run before passing to Anne Marie Bratten who fired the ball over the bar. Then in less than a minute player of the match Emer Heaney scored 1-1.

Heaney set up Bratten for her first goal in the 7th minute as Longford began to assert their dominance and the game was even at that stage beyond Carlow.

Longford’s Claire Delaney was sinbinned in the 12th minute but the numerical advantage mattered little to Carlow.

Mairead Moore and Laura Burke hit over fine points before Anne Marie Bratten found the net again with a fantastic strike in the 18th minute. The Killoe girl then got her third goal in the 24th minute as Longford opened up an 18 point lead.

Two points apiece from the formidable duo, Bratten and Heaney, left Longford in a landslide 5-9 to 0-0 lead going in at the break.

In the early stages of the second half, Longford’s Laura Burke was sinbinned but just like earlier that failed to have any effect on the game. In the 33rd minute Emer Heaney grabbed her third and Longford’s sixth goal and she followed that up with a pointed free as the completely one-sided game continued to be shooting practice for Longford.

Anne Marie Bratten and Claire Farrell added points before a free from Mairead Reynolds ended up in the back of the net. The Dromard girl got her second goal in the 42nd minute as the rout continued for Longford.

Substitute Michelle McCormack got her name on the scoresheet in the 47th minute when she got Longford’s ninth goal and Emer Heaney then fired over her fifth point in ending up with the impressive total of 3-5. The loudest cheer in the game materialised in the 53rd minute when Carlow got their first and only score - a point from substitute Lauren McGrath.

Longford replied with a goal from substitute Orla Noonan before Mairead Reynolds and Michelle McCormack tagged on two late points to complete the demolition job.

But they will have learned nothing from the ridiculous easy manner in which they won this game and they can expect a real serious test against Antrim in the opening round of the All-Ireland Junior Championship in a few weeks time.