GAA: Longford's Diarmuid Masterson is a warrior in the battle of Clones 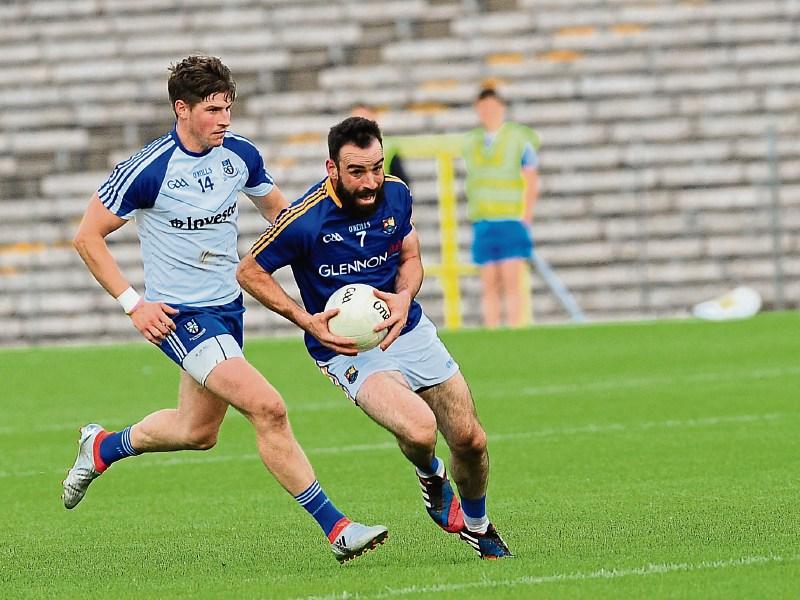 If you take the word ‘warrior’ no-one epitomised it more than Diarmuid Masterson on Saturday last  in Longford’s wonderful win over Monaghan in Round 2B of the All-Ireland Qualifiers in Clones.

The Dromard player was immense throughout be it in defence, midfield or in the attack and he scored three points. What made his performance all the more impressive was the fact he picked up a groin injury during the first half.

Speaking to the Leader after the game he said: “It was a struggle there at times. I strained the groin in the first half. In games like that you are going in bursts and are trying to take little bits of breathers and hope your team-mates will push it on.”

The outstanding Masterson was modest about his performance and just happy to contribute to the win;  “I was slotted in at wing-forward to be dropping back and helping out the defence and create an extra man there. It’s just the way gaelic football has gone, teams are working the ball up together in unison. I was lucky I got a bit of space in the second half and was happy to kick over a few points.

In the first half Longford went from five points up to be trailing by three at the break. Masterson stated they didn’t think back on what happened in the first half but instead focussed on the second half: “We went in at half-time feeling that we definitely should not have been three points down but here was no point in us thinking back because it would have affected us. We had another 35 minutes to go and we did not panic.”

Masterson has experienced some great qualifier wins with Longford but beating Monaghan was up there with the best in terms of his footballing career: “We are capable of big performances, we know that, and were determined to follow up with another big one. To come to Clones and beat another Division One team, the Ulster Champions, in their own backyard it has to be right up there with probably the best experience I have ever had playing football.”

Written off by many pundits, Longford were supposedly going to find the going tough in Clones but Masterson and his team-mates were quietly confident they could produce an upset and they did just that: “We had belief in ourselves that we could go out and do it. We got a decent start in the game and we knew we had the breeze at the start of the second half so we continued working hard and hoped to get something out of the game. We knew if we did the right things and other things went our way we would be in contention and we managed to do that,” said the delighted Diarmuid.