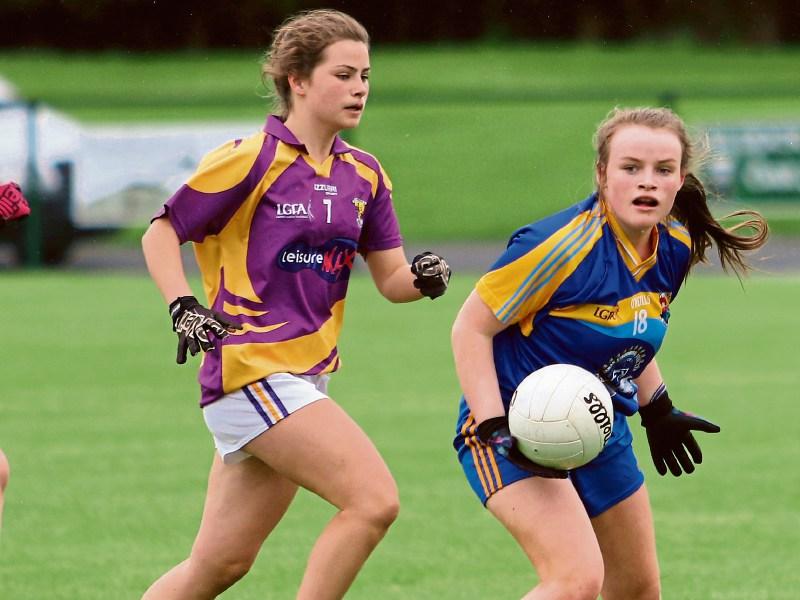 Longford U-16 Ladies suffered the heartbreak of a narrow one point defeat against Wexford in the Leinster 'C' Football Final at the Stradbally GAA grounds, Co. Laois on Saturday evening last.

In a game that was dogged by injury stoppages and some strange refereeing decisions, the Longford team surrendered an early second half seven points lead in eventually losing out by the minimum of margins.

Wexford got off to a flying start and had notched up three points when a good move led to a fine goal and things looked bad for Longford, trailing 1-3 to 0-0. Centre-half-forward Emily Coakley was causing lots of trouble for Longford's defence and proved to be a fine player, receiving the player of the match award.

Longford gradually got into the game and a well taken goal by Ciara Healy made up for a couple of earlier missed frees. Aisling McCormack began to dominate midfield with some great fielding and surging runs through the Wexford defence and had a fine game throughout.

A good move through midfield led to Aine Bannon receiving the ball on the wing and she ran through and finished to the net. The game was now level and Longford had survived the earlier pressure.

Three good Wexford points put them back in control before Longford's Cliodhna Allen scored a quick free that was followed by a well taken point by Aine Bannon. Ciara Healy slotted over the bar on the brink of half-time to leave the sides level at 1-6 to 2-3 at the break.

Longford got the second half off to a great start when Ciara Healy scored a fine point. Wexford hit back with a pointed free before Longford's Eve Nerney scored an excellent point and Cliodhna Allen kicked a high ball in and it dropped over the goalkeeper's head into the net.

Now it was all Longford and Nerney was taken down by the Wexford keeper in the square. After consulting with his umpires the referee awarded a penalty which was calmly slotted home by Healy to leave Longford seven points ahead, leading 4-5 to 1-7.

Unfortunately things went downhill from there and a harsh yellow card for Jessica Barry (after pressure from the Wexford bench) was followed by a red card for Cliodhna Allen. While her tackle was high, Cliodhna was fouled first as she went for the ball and was unlucky to be sidelined.

This was a huge changing point in the game and now at 13 v 15, Wexford began to pile forward in droves in capitalising on their numerical advantage. Five excellent points followed and with the deficit down to 2 the inevitable goal came. A high ball wasn't dealt with and was palmed into the net.

Now trailing by a point, Longford made several positional changes to try to get back in the game but Wexford went two points ahead with what proved to be their last score in the entertaining final.

After what seemed an eternity, Jessica Barry was allowed back on the field and the last move of the match led to a Longford free. Barry blasted the ball over the bar with the Wexford goal line packed. The resulting kick out was met with the final whistle and Longford supporters felt there should have been more added time.

This was a tough defeat for the Longford girls but manager Dara McGann will rally her troops for the All-Ireland series starting in late June.

U-14 ‘A’ Championship Semi-Final

U-14 ‘B’ Championship Semi-Finals

Congratulations to the Longford girls team who won the U-12 Division 2 Leinster Final on Saturday last, 18th of June in Carlow. They had a very long day leaving Longford at 7am and had to win three matches to earn their place in the final. Their first match was against Westmeath which they won comfortably. Their second match was against a very strong Kildare side, which resulted in a full time score of 0-4 to 0- 2 in favour of Longford. Their third match was against Offaly and the Longford side pulled away and won with ease which ensured their place in the final where once again they met the Kildare side. As per the previous match both teams were evenly matched but Longford once again pulled through winning 1-6 to 1-4. Thank you to the managers on the day and all the parents that came to support the team.