New referee recruits blazing a trail for women in Longford 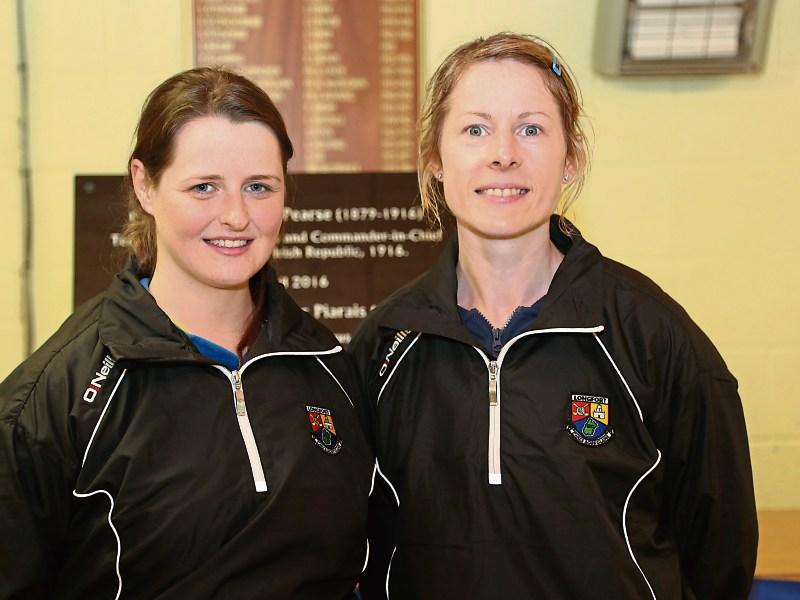 “Ye must be mad...a glutton for punishment.”

Michelle Mulvey and Amanda Matthews have heard those words uttered quite frequently by their friends upon learning that they’ve taken the brave step to join the ranks of Longford’s GAA referees.

The ladies are blazing a trail and breaking the mould in a male dominated profession, but Michelle, who refereed the Under 13 Football Club Regional Shield Final at Glennon Brothers Pearse Park last Friday, candidly admitted,

“I really haven’t thought of it that way. I  enjoy it and go out to do my best. I just love the game.”

She isn’t intimidated by potential challenges that lie ahead either. “I’ve played for a long time, I know the game.  I just have to block out what is coming from the sideline and get on with the task.”

An All-Ireland Ladies Junior Championship medal winner with Longford in 1997 (a side that featured Fiona Blessington, Mary Kiernan and Dara McGann as captain), Michelle, who also represented Leinster in the interprovincial series, believes that the emergence of two female referees will encourage more ladies to follow in their footsteps.

“When they see myself and Mandy refereeing, it might encourage more girls to take up the whistle. Some girls have done a referees’ course in the ladies but they just haven’t carried it forward and taken charge of matches.”

Michelle (Carrickedmond) and Amanda (St Columba’s Mullinalaghta) are among ten new referees that Longford GAA has recruited this year.

He outlined that there were only 31 trained up referees and that to run a smooth and effective refereeing service it would require 45 referees.

As part of the recruitment drive, rolled out by the Referees Committee along with the 20/20 Work Group, clubs were requested to each produce at least one new referee.

“A group text message came out from the club and I text back that I would be interested,” revealed Amanda, who is a teacher at Aughnagarron NS and deeply involved with the  coaching of pupils for Cumann na mBunscoil competitions.

She has played ladies football with Mullinalaghta for seventeen years and played alongside Michelle at inter-county level also.

Cavan referee Maggie Farrelly created history by becoming the first woman to referee a men's inter-county championship game - Fermanagh v Antrim in the 2015 Ulster Minor FC, and earlier this year, she was in the glare of media spotlight after she took charge of a McKenna Cup encounter.

Amanda laughs, “I don’t think I’ll be the next Maggie Farrelly now!”

Adding that she took up the whistle to broaden her coaching skillset. “Down the line, I see myself refereeing underage. I don’t think I’ll be going to senior.”

However, Michelle didn’t entirely dismiss the notion of progressing to the inter-county stage.

“Maggie is a great woman. She has refereed ladies All-Ireland Finals and she is highly respected. It would take a lot to follow in her footsteps. You never know. One step at a time as they say.”

Among the attributes referees must possess is a thorough knowledge of the rules, be physically and mentally fit, deal courteously with players and officials, have the ability to remain calm, the moral courage to take decisions which are correct, be able to live with unfair criticism and to accept constructive criticism.

Amanda remarked, “The training wasn’t too bad. From going to a lot of matches, I would know a lot of the rules anyway. There was some rules I was unsure of and it was good to get information and direction on them.”

She added, “I know it isn’t the easiest job in the world. You get a lot of abuse. I’ve refereed some U-13 League matches and I’ve found them grand. I just take them as they come.”

Michelle (nee Hannify) who won a number of county ladies titles with St Helen’s Drumlish and also played with the Garda club in Dublin, explained that when she received a text from Carrickedmond Ladies club secretary Michelle Farrell asking if anyone would be interested in attended a referee training course, she thought ‘I’ll chance my arm at this’.

“I was on about it for the last couple of years, between one thing and another, I had cancelled a couple of courses so I didn’t get to do it. So when the chance came up, I decided to go for it.”

Married to Kevin, the couple have four children - Caoimhe, Brian,  Cormac and Eadaoin,  and their’s is a sportsmad house. Michelle smiles, “I still played for the county after I had the four kids. I put it down to love of the game.” Now aged 42,  she said her intention was to retire and hang up the boots, but having played for 30 years, the lure of playing for another year was too tempting to resist.  “Of course I was persuaded to go back, not that it took much persuasion! But I’d say this will be my last year and I’ll be able to give more time to the reffing then next year.”

Employed as a dental nurse, Michelle’s busy schedule, in addition to playing herself, includes serving as coach to Falcons U-12 girls and Carrickedmond Community Games basketball teams, and to the Colehill national school ladies teams. The Community Games side have progressed to the Leinster Finals, while Colehill enjoyed Cumann na mBunscoil and Mini 7’s success.

Both Michelle and Amanda have been complimentary of the mentoring and support they’ve received from the County Board since embarking on their journey as knights of the whistle.

“I found the training course very good. Tutors went through different rules and scenarios, presenting video clips and asking what would you do next if you found yourself in that situation. We’ve had fitness and written tests and mentors have come out to our games. Then, they talk you do and advice you, give guidance, assess you and point out where you are going right or wrong.”

Amanda added, “There has been something every week from the County Board to keep you going. The fitness test and meetings to clarify rules, and the feedback on matches you have refereed as well is very good.”