All County Football League Division 1 - Round 8 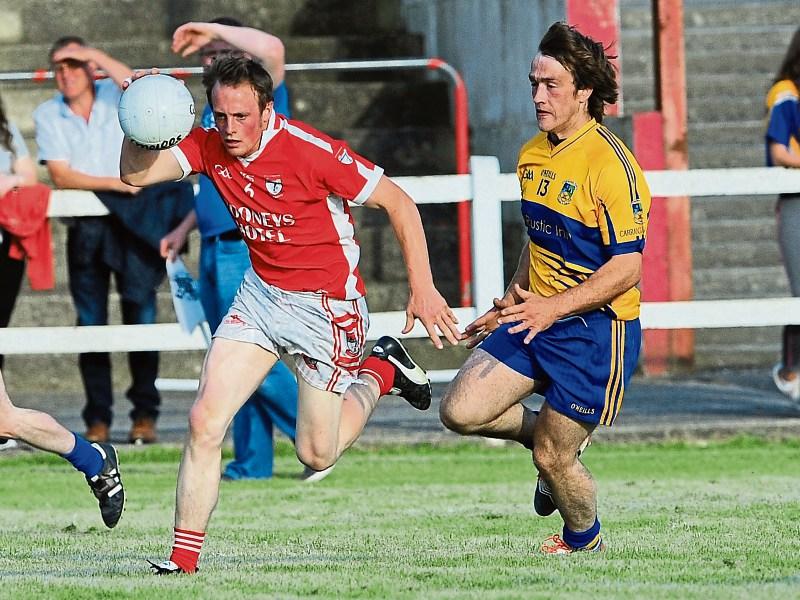 A crucial goal from Thomas Mulvihill in the 18th minute of the first half proved to be the difference in the end as Ballymahon just got the better of Carrickedmond in a close encounter to register their first win this season.

The neighbouring rivals are set to meet again in the group stage of the senior championship later in the summer and while Carrick produced a strong finish in the Division 1 league clash at Leo Casey Park on Saturday evening last they lacked the belief to come out on top in this entertaining local derby.

Chances were squandered and vital possession was lost but the visitors still had a glorious opportunity of snatching a last gasp winning goal in this relegation battle when substitute Conor Kelly got through but his point-blank shot was well saved by Ballymahon keeper James McCormack in the second minute of stoppage time.

While that was a very lucky escape for Ambrose McGowan’s outfit, the home side had a clear-cut chance of putting the issue beyond all doubt in the 58th minute. Pedro Byrne created the opening for Joe Kelly to find the back of the net but the talented county minor was denied by Carrickedmond keeper Garret Higgins who made a fine save.

Byrne and Kelly were a constant threat in the Ballymahon attack (without chief marksman Colm Flynn) and their pace posed a lot of problems for the Carrickedmond defence who were in trouble whenever the lethal duo got their hands on the ball.

While there was nothing separating the enthusiastic teams in the first quarter of the contest, deadlocked at 0-3 apiece, the completely unmarked Marty Mulvey should have scored a goal for Carrickedmond in the 14th minute when he directed a Keith Maguire pass against the post.

The early scores for Carrick were fired over by Cathal Belton, Mulvey and Jonathan Keegan while a brace from Joe Kelly (free and play) and Mark Connor were on target for Ballymahon.

Mulvey landed a cracking point to regain the lead (0-4 to 0-3) for the visitors but then came the defining moment in the match when Thomas Mulvihill scored the decisive goal after linking up with Kevin Diffley.

The initial attempt from Mulvihill was saved by Garret Higgins but the corner-forward followed up to scramble the rebound over the line.

That goal left Ballymahon leading by 1-6 to 0-6 at the break with midfielder John Nevin kicking a couple of great points and they could have grabbed another goal when Pedro Byrne raced through to fire the ball over the bar in stoppage time.

The other Carrickedmond scores in the first half came from frees converted by Mark McDonnell and Keith Maguire and they made a bright start to the second half with a very good point from Patrick Farrell.

But back came Ballymahon with two more points from Joe Kelly, the first from play and the second from a close range free, awarded after the other dangerman Pedro Byrne was brought down by the Carrick keeper Higgins when a goal was there for the taking and a penalty might have been awarded in this incident.

The ding-dong battle continued as the sides shared six points with Marty Mulvey, Jonathan Keegan and Patrick Farrell (well struck ‘45) on the mark for Carrick while Thomas Mulvihill, Eddie Noonan and Pedro Byrne (when a goal was on) replied for Ballymahon who were 1-11 to 0-10 ahead with 12 minutes of normal time remaining.

Carrickedmond, managed this season by Killoe clubman Ger Carberry, then gained control in a determined bid to close the gap and three points in a row followed from Marty Mulvey and Mark McDonnell (two frees).

Ballymahon were hanging on by the minimum of margins but McDonnell then missed a couple of costly frees for Carrick before Joe Kelly brought the scoring to a close when he kicked over his fifth point of the game in the 59th minute to clinch a deserved home win.