Understrength Killoe hold out for narrow win over Slashers

All County Football League Division 1 - Round 8 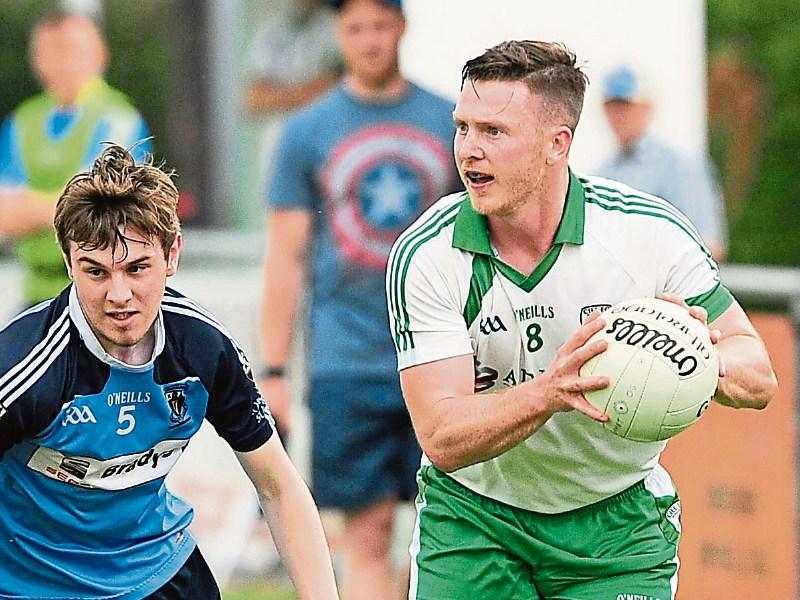 Killoe kept up the pressure on leaders Clonguish with a hard fought two point win over Longford Slashers in the Division 1 league game at Emmet Park on Sunday last.

Although missing a number of regulars through injury and other commitments, Emmet og performed well throughout. Slashers, for their part, will be disappointed that they couldn’t get anything out of the game because they had their chances.

Slashers had early chances to open the scoring but hit two wides. A free from Mark Hughes in the 4th minute was the first score of the game. Andrew Dalton replied with an excellent point for Slashers.

The Townies then hit two more wides before Daniel Mimnagh fired over for Killoe. In the 13th minute Killoe keeper Shane Fitzpatrick pulled off an excellent double save to deny Robbie Clarke and then Michael Brady.

Two points from Ciaran Donohoe gave Killoe a two point lead by the 15th minute. Though that lead didn’t last too long; Paul Kelly found Robbie Clarke and he made no mistake in firing the ball to the net to level the game.

Killoe then pulled away and hit over six points in a row. Denis McGoldrick (free) was followed by a point from Michael Quinn and two from Mark Hughes (one free). Larry Moran added two more to give his side a six point lead by the 26th minute.

Paul Kelly hit over a much needed point for Slashers in the 28th minute. Ciaran Donohoe replied with a fisted effort for Killoe before Ciaran Farrell hit over a free for Slashers as they trailed at the break, 0-11 to 1-3.

Slashers made a fine start to the second half with Robbie Clarke hitting over a point and minutes later Liam Barry found the back of the net to leave just one point between the sides. A pointed free from Barry Gilleran in the 41st minute drew Slashers level.

Killoe went back ahead in the 45th minute when substitute Jamie King pointed but Eugene McCormack’s side levelled again in the 48th minute through Andrew Dalton.

Slashers then had chances to take the lead but couldn’t get the scores they required. Killoe also found themselves in possession but gave the ball away cheaply. In the 55th minute Daniel Mimnagh put Killoe ahead by a point.

Three minutes later Killoe had a goal chance; Larry Moran found Jamie King but Slashers keeper Colm Farrell did well to come off his line and get to the ball ahead of King, the ball came to Denis McGoldrick and he fisted over the bar to put two between the sides.

Barry Gilleran hit over another free to leave just one in it but down the other end Mark Hughes fired over a free to restore Killoe’s two point advantage. Try as they might Slashers couldn’t get the scores to level the game again and Killoe held out for an important win.