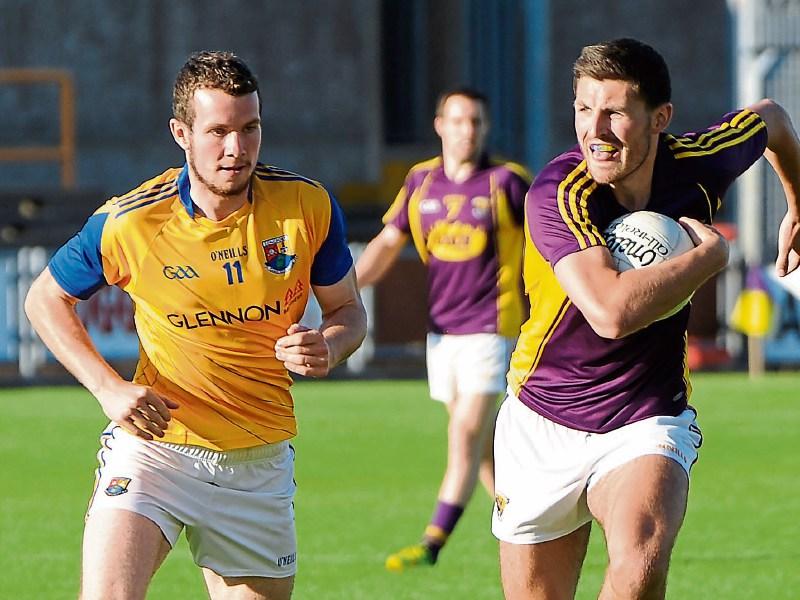 Missing Shane Mulligan, Rian Brady and Ronan Sweeney from the team that staged a remarkably recovery from ten points down to conquer Cavan in the opening round, the Longford junior footballers failed in their bid to reach the Leinster Championship Final.

While the title holders Wexford, backboned by seven members of their senior squad, were the better side in coming out on top by the comfortable margin of six points in the finish they struggled in the early stages of the game after conceding a soft goal in the 7th minute.

Jayson Matthews capitalised on a rare mistake by the otherwise very competent Wexford keeper Philip Murphy to finish a Shane Kenny centre to the net and a brace of well-taken points quickly followed from Larry Moran in the semi-final clash at a near deserted Wexford Park on Thursday evening last.

With left-half-back James Carroll shooting over the bar early on, Longford were leading by 1-3 to 0-2 with nine minutes gone on the clock but managed just one more score during the remainder of the first half - a David McGivney free in the 21st minute.

Losing midfielder Aidan McElligott, who was dismissed after receiving a black card in the 14th minute, proved to be a significant setback and Frank McNamee’s side suffered more bad luck when Larry Moran was denied a goal after his shot hit the post in the 24th minute.

After the home side enjoyed a dominant period that yielded five points in a row to hit the front, with impressive wing back Paul Curtis surging forward to fire over a couple of those scores, the defining moment in the match materialised when Wexford snatched a fortunate goal in the 28th minute.

Longford keeper Ciaran Garvey parried a shot from Niall Harney against the crossbar but the latter followed up to finish the ball over the line in the subsequent scramble and that left the model county 1-7 to 1-4 in front at the break.

Larry Moran had another goal attempt with time running out in the first half but he shot narrowly wide and then David McGivney failed to convert a couple of frees (the first of which was a disputed wide) which hit Longford hard in their efforts to get back into contention.

Although the midlanders made a great start to the second half with a point from Jayson Matthews direct from the throw-in, followed immediately by a cracking strike from defender Vinny Hourican, Wexford quickly regained the upper hand and always looked like they could step up another gear when required.

Four points in a row through Sean Ryan, Conor Sinnott (free), Glen Malone and Niall Hughes left the slaneysiders 1-11 to 1-6 ahead and well on their way to victory over the Longford juniors at the penultimate stage of this provincial competition for the second year in succession.

A point apiece from substitute Andrew Dalton, Shane Kenny and James Carroll between the 41st and 48th minutes gave Longford some hope of avoiding defeat but they failed to register another score and were unable to engineer a badly needed goal.

Wexford should probably have found the back of the net in the 42nd minute when the clean through Ian Carty blasted the ball over the bar and they clocked up three more points through Conor Sinnott (his fourth score), Carty and Curtis to run out convincing winners.

Frustrated Longford ended up with 14 players on the pitch after defender Aaron Quinn was sent-off for a second yellow card offence in the 54th minute but it must be said that Wexford were worthy winners in advancing to meet Louth in the Leinster Junior Final.