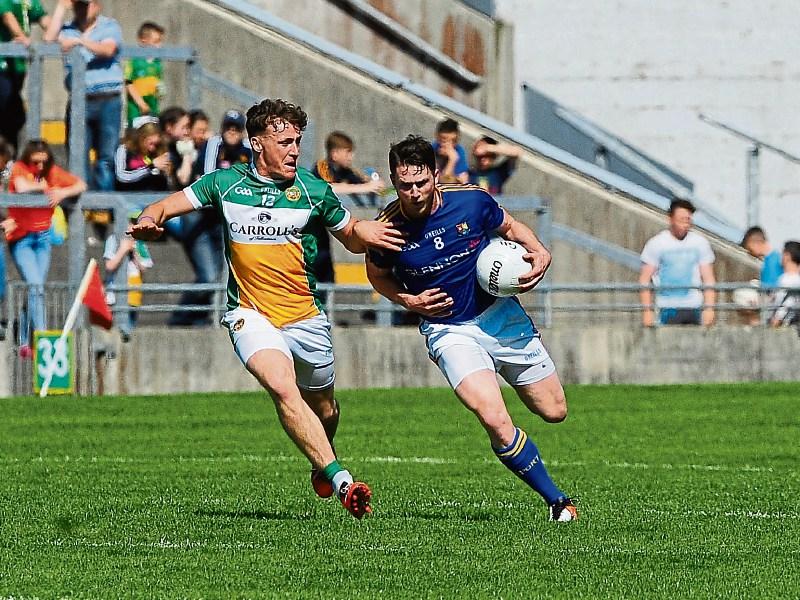 The concession of ten points, during a 28 minutes spell where they failed to score themselves, proved fatal as Longford succumbed to a very fired up and hungry Offaly side during this afternoon’s Leinster Senior Football Championship opener played in glorious sunshine at O’Connor Park, Tullamore.
Throw-in was delayed by ten minutes to enable the 5,023 spectators, many of whom arrived merely minutes shy of the scheduled 3.30pm start, gain entry to the sun splashed venue and they were treated to an open contest where all but seven of the points scored, 4-27 out of 4-34, came from open play.
Longford, bidding for their third consecutive provincial championship win over Offaly, led by 1-6 to 1-4 with 17 minutes elapsed. However, they inexplicably failed to score again for 28 minutes and with 45 minutes gone, Denis Connerton’s side found themselves 1-14 to 1-6 adrift and it was this eight points margin that ultimately separated the sides at the final whistle also.
The loss meant it was Longford’s 12th time to lose against Offaly in the 19 Leinster Championship meetings that there have been between the counties since 1938. Two of Longford’s five victories over the ‘Faithful County’ came in 2014 & ‘15. Two of the previous encounters ended in stalemate - 1970 and ‘84 - with Longford losing both replays.
Longford’s starting fifteen included six players - Andrew Farrell, Donal McElligott, Darren Gallagher, James McGivney, Robbie Smyth and Paul McKeon (he missed last year's game due to injury) - that didn't feature at any stage during their 0-16 to 0-13 victory over Offaly at the same juncture of the 2015 Leinster Championship.
While four of the six subs introduced today - Paul McGee, Michael Brady, Brian and Mark Hughes - didn’t play against Offaly twelve months ago either.
Longford struggled to match Offaly’s intensity level and on the day, many of the players they were looking to, were prevented from exerting the type of influence they would have liked on proceedings.
Remarkably, the victory was Offaly’s first in the Leinster Championship since 2007 when they defeated Carlow, and two players that featured back then, Niall McNamee and Niall Smith, were among the stars against Longford, registering 0-4 and 1-1, respectively. Eoin Carroll, Graham Guilfoyle, Peter Cunningham, Niall Darby and Johnny Moloney also shone for an Offaly side that now has a Leinster quarter-final against Westmeath in Mullingar to look forward to on June 12.
Robbie Smyth and James McGivney, who contributed 1-9 between them, were the shining lights for Longford who now go into the All-Ireland qualifiers and will have to wait until the weekend of June 25 before they play again.
It is an utterly ridiculous scenario but that’s how the championship is structured. And given the length of the break between matches, it is quite possible that Longford could lose some players who may be attracted by the lure of playing or working on foreign shores this summer.
Before Offaly gained a stranglehold, there was an exciting opening spell. Aided by the breeze, Pat Flanagan’s men raced 0-3 to 0-1 ahead inside five minutes with points from Bernard Allen (free), Nigel Dunne (‘45) and Eoin Carroll. Longford’s sole reply came from Robbie Smyth.
Barry McKeon’s fortuitous sixth minute goal - Offaly ‘keeper Alan Mulhall misjudged the hopping ball - provided Longford with plenty of optimism but the impact of the score was negated in the 10th minute. Joey O’Connor cleverly released Graham Guilfoyle and he stormed through the heart of the Longford defence and blasted home a cracking goal, 1-3 to 1-2.
Longford’s Robbie Smyth (free) levelled matters before Niall McNamee and Smyth traded points. Darren Gallagher and Smyth registered points to edge Longford 1-6 to 1-4 ahead and they then spurned a few crucial opportunities to extend that lead. Firstly, Paul McKeon was off target and then, the usually reliable Brian Kavanagh sent a free wide.
Offaly stepped up through the gears and eight unanswered points gave the home side a commanding 1-12 to 1-6 interval advantage. Bernard Allen (3), Niall Smith, Peter Cunningham McNamee (2) and Nigel Dunne were on target as the Faithful cut a confident swagger. During this period, Kavanagh dropped a shot into Alan Mulhall’s arms while Smyth was unlucky to see a free rebound off the upright.
The Longford management rang the changes for the concluding half, introducing three subs - Colm P Smyth, Paul McGee and Michael Brady - and in the 41st minute they were awarded a potential lifeline in the guise of a dubious penalty. But to their dismay, Kavanagh’s strike was deflected onto the post by Mulhall and it was cleared to safety - atoning commendably for his earlier error.
Offaly scored their tenth unanswered point through a Dunne free, 1-14 to 1-6. Last year, gutsy Longford came from seven points behind, 0-5 to 0-12, to outscore Offaly by 0-11 to 0-1 and march to a memorable victory, but there was to be no repeat of those heroics on this occasion.
Longford eventually ended their 28 minute scoring famine thanks to the industrious McGivney. The same player had a 53rd minute shot fly over the bar, 1-15 to 1-10, as Longford clawed back to within five points. A flew inches lower, who knows, the onion bag might have rattled and the trend of the match might have been transformed
However, three minutes later, the issue was put beyond all doubt as impressive midfielder Niall Smith fisted home Offaly’s second goal, 2-15 to 1-10.
Smyth did net a 59th minute consolation goal for Longford, 2-17 to 2-10, and in the closing minutes the highlight was two top drawer points landed by Offaly sub Anton Sullivan.