Paddling their own canoe in Abbeyshrule 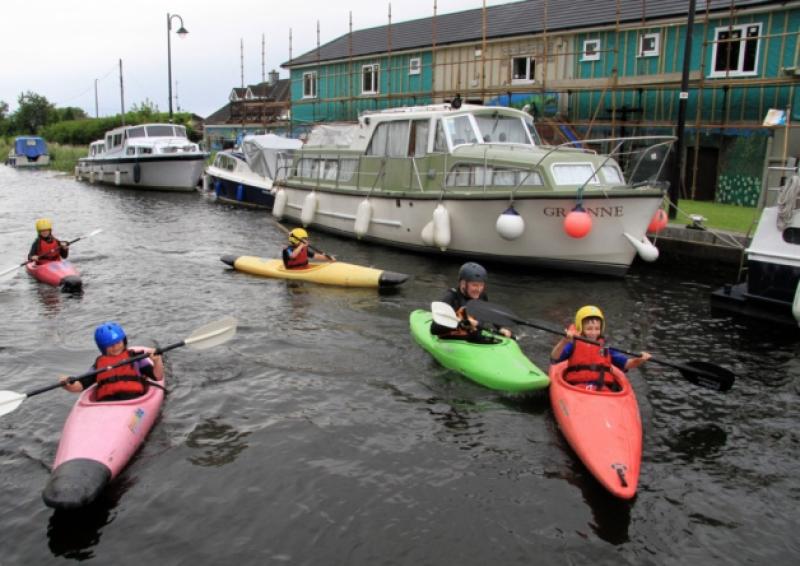 There is something special about Abbeyshrule - especially when the sun shines and the harbour is dotted with canoers and kayakers.

There is something special about Abbeyshrule - especially when the sun shines and the harbour is dotted with canoers and kayakers.

Last Wednesday, the Leader went out to the award win-ning village to speak to the members of the Abbeyshrule Canoeing Club which was established just two years ago.

With over 70 members on its books, the club is thriving. It also received a financial boost of €13,000 from the Capital Sports Grant and with membership on the increase, the future looks bright and exciting for canoers in south Longford.

Nine-year-old Shane Burke has been a member of the club since its inception in 2012. Shane, who attends Lenamore NS, explained that he has be-come more confident since joining and is no longer afraid of the water.

“ I l o v e g e tt i n g w e t ,” laughed Shane. “I have learned not to be afraid of the water and I really enjoy kayaking. I have Level 1 & 2 now and I participated in the schools event a few weeks ago. That was brilliant and I made friends from other schools as well. I do it once or twice a week and I really look forward to it.”

Fergus Hilliard and James Byrne are members of the organising committee and plans are now in place to develop and expand the club in the months ahead.

“It was about three years ago when I first noticed peo-ple kayaking on the canal and myself and my wife Rosie be-gan to think that it was some-thing that we could do with the kids,” Fergus added. “We decided to hold a training session after that and over 60 people came. We knew then that there would be a lot of interest in a club like this.”

Outdoor Discovery Ireland and Waterways Ireland rowed in behind the Abbeyshrule Canoeing Club and a number of events have been held since.

“We decided then to set up a club of our own here in Ab-beyshrule; we held our first AGM in November 2012 and so here we are.”

The club encouraged not just children into its ranks, but also adults and member-ship is building steadily over the past two years.

“The kids love it,” said Fer-gus, adding “and the parents are getting more and more in-volved”.

“Earlier this year we ran courses with the schools kids in Longford; six schools par-ticipated and it was very suc-cessful. “O ve r 7 0 p a r t i c i p a n t s learned new skills and there were opportunities for every-one to get Level 1 & 2 certifi-cates. The sport itself can be very challenging, particularly when you are exposing your-self to the elements.”

A few months back, a 10k trip through Longford by canal was held by the club’s members.

“It was a super family day out,” remarked Fergus. “We went from Branni-gan Harbour to Kenagh, but stopped off to have a picnic, and then the younger children joined us for the last 3k. “We are planning to devel-op the club now. We will hold more sessions and would love to install a flat water slalom course down around Abbey-shrule Airfield; an obstacle course would also be great.”

Abbeyshrule Canoeing Club is affiliated to Canoeing Ireland. Annual membership includes €70 (family member-ship); adult, €30; child, €15. Membership allows for full access to all equipment and the club encourages at least one adult to join with a child. “We hope to run Level 3