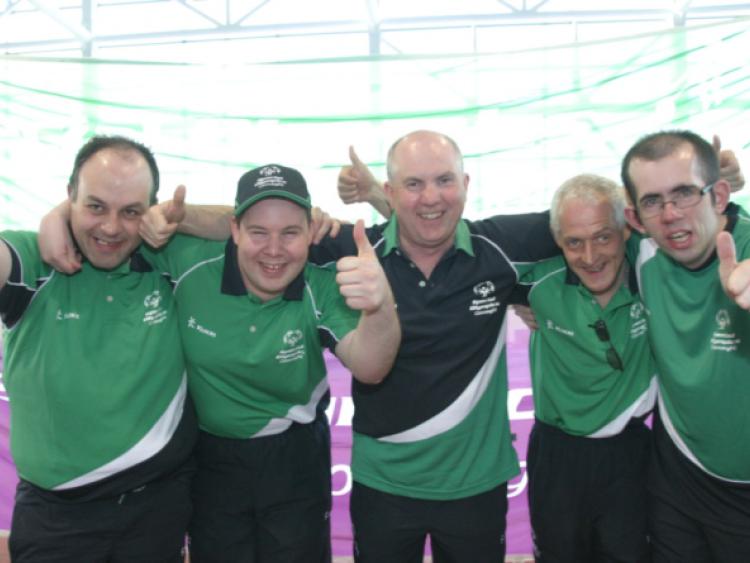 James McWeeney, Declan Mooney, Patrick Hickey and Stephen Browne from Longford will all travel to Limerick next month for the Special Olympics Ireland Games.

James McWeeney, Declan Mooney, Patrick Hickey and Stephen Browne from Longford will all travel to Limerick next month for the Special Olympics Ireland Games.

A photo-call was held in Athlone IT recently to officially launch Team Connaught, which includes counties Galway, Sligo, Leitrim, Westmeath, Roscommon, Mayo and Longford. The Ireland Games will be one of the largest and most prestigious sporting events to take place in the country this summer and Connaught rugby player George Naoupu was on hand to lend support and encouragement to the athletes during the photo call.

Altogether, two hundred and twenty athletes from seven counties, supported by over a hundred coaches and management team, will travel to Limerick to compete in 13 sports. The four athletes from this county will participate in aquatics and bowling.

Myra Merrick, Regional Director for Special Olympics Connaught, said the Athlone IT launch was a fantastic opportunity to celebrate Team Connaught, the athletes and coaches.

“Our athletes are not only representing Connaught but also their families, clubs and country,” she added. “We know the athletes will do their parish, county and indeed Connaught proud. With only a few weeks to go until the Ireland Games our athletes and coaches are in the final stages of preparation for this.”