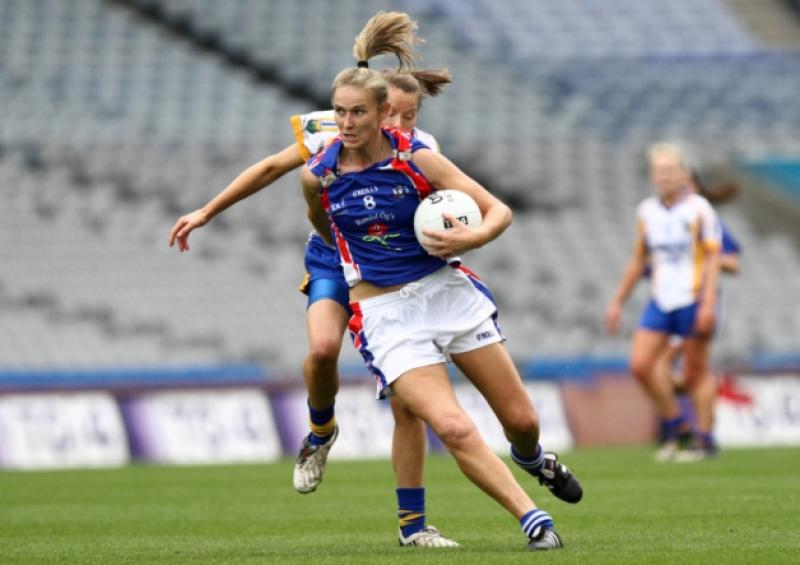 Longford and Drumlish native Linda McKeon will lead her New York team mates out onto the hallowed sod of Croke Park this Sunday, September 28 as they face Wexford in the TG4 All-Ireland Ladies Junior Football Championship Final (throw-in, 11.45am).

Longford and Drumlish native Linda McKeon will lead her New York team mates out onto the hallowed sod of Croke Park this Sunday, September 28 as they face Wexford in the TG4 All-Ireland Ladies Junior Football Championship Final (throw-in, 11.45am).

Three years ago, New Yorkâ€™s bid for honours ended in agony as they lost out to Wicklow following a replay and Linda, who captains the side from mid-field, is hoping they can banish the memory of that reversal by capturing the West County Hotel Cup.

Wexford, beaten in last yearâ€™s final by Offaly, overcame Louth by 2-9 to 0-10 in the All-Ireland semi-final at Ashbourne on Sunday, August 24, while New York inflicted a heavy 5-12 to 1-5 defeat on Derry in the second penultimate round tie played that day.

Linda, daughter of Pat and Josephine McKeon, is refusing to get carried with that impressive win over the Oak Leaf ladies.

â€œWe came through the semi-final okay. It was tough as we were going into the match â€˜blindâ€™ as we donâ€™t have inter-county opposition over here,â€ she told the â€˜Longford Leaderâ€™. She added, â€œWe know Wexford are very strong but we believe that we are just as talented. We will respect them but we intend to play our own game.â€

A student at Lehman College, Linda described her parents â€“ Pat and Josephine - as the biggest influences on her football career.

â€œThere are seven in our family and Iâ€™m in the middle (brothers Derek, Anthony and Alan and sisters Sharon, Annemarie and Elaine). Since I played basketball, soccer, athletics and football, I was always on the go. I donâ€™t know how my parents and brothers and sisters also kept driving me around the place. The only reason Iâ€™m still playing is because of what they did for me.â€

Linda won medals at every grade with her club St Helenâ€™s of Drumlish and she was also an integral part of successful Longford inter-county sides and the all-conquering Moyne Community School side of 2001 that marched to provincial and All-Ireland schools glory. She moved to New York in 2006, initially lining out with the Cavan club before joining Kerry/Donegal who this year won their first NY county championship since they were established thirteen years ago.

â€œIt would be great if we could win. It would really let GAA people back home know that we are working hard to develop the games over here but we need more funding to help us even more,â€ remarked Linda.

Finance is a serious issue for NY and in 2011 they had to dig particularly deep. On Sunday, September 25 of that year at Croke Park they were on the cusp of claiming the TG4 All-Ireland Junior title as they led 0-9 to 0-8 only for Wicklow sub Laura Hogan to grab a dramatic levelling point and force a draw. So for the NY ladies there was another flight across the Atlantic and unfortunately on Sunday, October 9 they lost the replay by 0-8 to 2-10.

â€œPlaying in Croke Park was a fantastic experience. It is the ultimate â€“ the Super Bowl of GAA. We are looking forward to playing there again. I think all players should just try to enjoy the day. It is why we play, to enjoy it and in the hope of one day getting to play there,â€ outlined Linda.

But the downside was that more than $180,000 had to be raised to fund their campaign. â€œYes 2011 was fantastic but it was also gruelling. The effort that was put in could not be criticised. We had to raise over $180,000 to fund the whole campaign and at the end of the day we lost. Itâ€™s a sore point because I believe we should have won the first day but there was too much emphasis on giving the ball to one or two players.â€

Linda continued, â€œIt was just so hard to build yourself up for the replay. We were completely deflated after the drawn game and having to travel made it so much worse.â€

The NY backroom team comprises of Rosie Oâ€™Reilly Broderick and Paddy Curtis (managers), alongside Dean Oâ€™Connor, Joanne McKenna and Dolores Kelly; and Linda explained that the fresh faces introduced to the squad have proven to be their source of â€˜motivationâ€™. â€œThese girls are young and play to the best of their ability. They know nothing different and that has stood to us.â€

Arranging collective training and matches can be difficult. â€œThe GAA is not something that you can explain to employers over here and be expected to get the same response as you would back home. In 2011 we had girls that had to work 12 and 14 hour shifts alongside training just to get time off, cover shifts of those who would be covering you when you were at home or call in sick for a week straight. Some girls even had to shut down their Facebook accounts for fear that somebody in the workplace would find out.â€

Nonetheless Linda says GAA and ladies football is a massive part of the NY community. â€œItâ€™s the heart of McLean Avenue, Queens, Manhattan, Brooklyn, and now New Jersey are all GAA strongholds. I have met life-long friends through the GAA over here and the Irish are the first to help someone in need. There are hundreds of benefit events each year for someone in need and it usually starts with a connection in the GAA. It is a great way to meet new people and perhaps make working connections for the long-term future.â€

Thirty-year old Linda keeps a close eye on the progress of her native club, St Helenâ€™s, who last Saturday week won the 2014 Longford Ladies Intermediate Final with a 6-5 to 3-9 victory over Carrickedmond in Glennon Brothers Pearse Park.

â€œSt Helenâ€™s have been doing better and better in the last few years. It is nice to hear they are doing well. My sisters play with the club and I always get a run down from Daddy or Mammy.â€

Linda misses her family very much and when asked if sheâ€™ll return home to Ireland at some stage in the future she replied, â€œI do miss having my family but since I see them so often itâ€™s not too bad. There are others who canâ€™t travel and Iâ€™m lucky to be able to do so.

â€œFor the time being New York is home. I have family here, they may not be blood related but I have my house, my friends and for now this is where Iâ€™ll be. At least until myself and my fiancÃ© start a family, then it might be considered. But we have so many opportunities here that I would hate that my kids might miss out on should I move home.â€