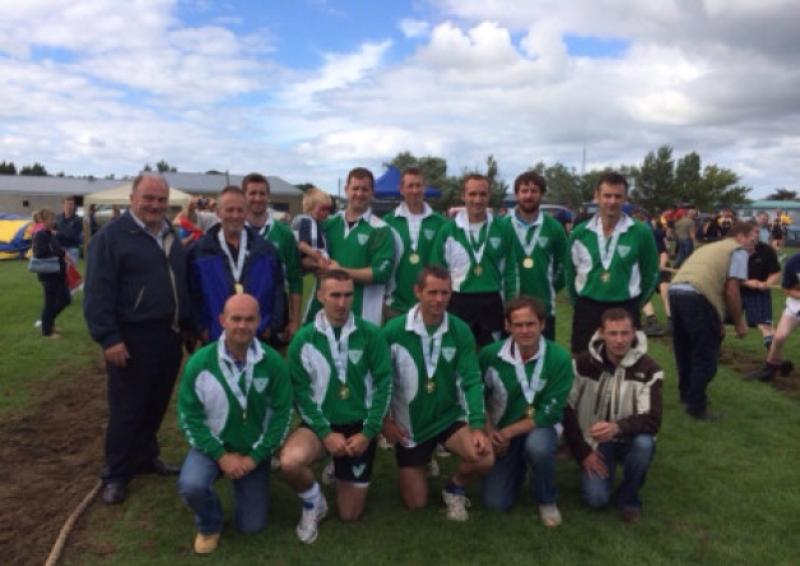 Clonterm Tug-o-War team will compete in the National 640kg Championship this weekend, less than a month after becoming National Champions in the senior 680kg category.

Clonterm Tug-o-War team will compete in the National 640kg Championship this weekend, less than a month after becoming National Champions in the senior 680kg category.

Set up last year by Clonterm men Ollie and Adrian Glancy and their cousin Derek Steele, later joined by pullers from Leitrim and Ballygar, the team has gone from strength to strength.

Speaking to the Leader, Ollie Glancy Snr said “I pulled Tug-o-War myself back in the day and we had a great team here in Longford and that’s where the lads got the initiative and set up the training facility here.”

Training four times a week in a self-funded, state-of-the-art training facility in Clonterm with coach Noel Kiernan from Fermanagh, their determination has paid off and they have been winning titles since early June.

“They are training in the facility pulling blocks 600-1000 kilos in weight, then they are gym training, running and mountain-climbing. The reason they are successful so quickly is that they have worked savage hard at it and they are getting the results.”

The team knows no bounds when it comes to training and fitness. They travelled to Sweden in mid-June for a weekend event with some of the best teams in the world, which proved to be the making of the team as they saw the standard needed to achieve world titles.

Clonterm will now go on to the National 640kg Championship in New Ross where they hope to dethrone Boley of their 640kg title of 20 years. “It would be fantastic if we win,” said Ollie, “it would be the biggest shock in Tug-o-War history.

“No Longford team has ever won a national Tug-o-War title before now so we are extremely proud of our achievements in such a short time. Longford never had a Tug-o-War club before and from this club you are going to have representatives on the Irish team to go abroad. If we win the 640kg next weekend the whole team has to represent the country.”

The team are running a bus down to New Ross from Longford and are looking for supporters to help cheer them on. If anyone wants a seat on the bus, they can contact Ollie on 087 286 2883.

The team extends their thanks to the sponsors who have helped them to date, The Chestnut Tree in Killashee, Ryne Rock, Kanes Auto Test Centre, D&E Mc Hugh, Brian Fallon Hardware, Sealtec, Tank Pipe and Drain Longford and all their followers on Facebook for their nice comments.