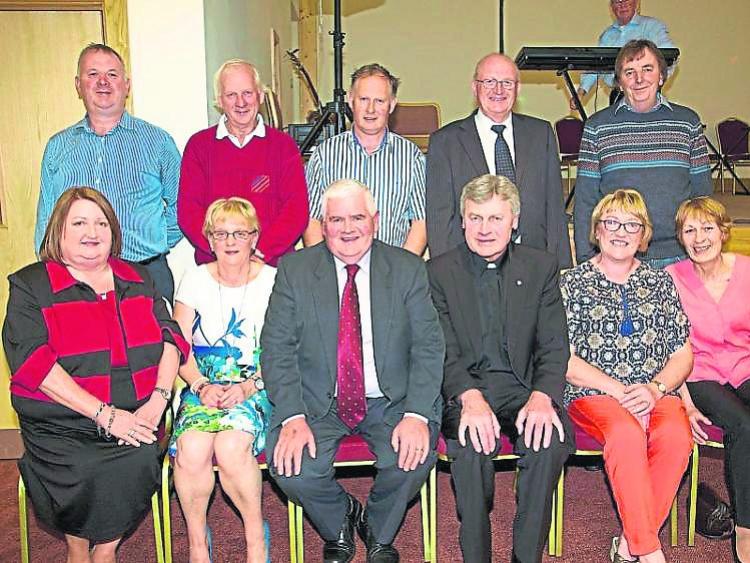 Fr Michael pictured with other locals at the parish centre opening in 2016. Picture: Michelle Ghee

Fr Michael Campbell may originally hail from Gortletteragh in Co Leitrim, but it is the area of Abbeylara which has truly captured his heart.

After first moving to the area in August 2002, Fr Michael has gone onto have quite the impact and has contributed massively to the development of many different amenities in the area. In fact, his impact on the parish has been described by locals as ‘huge’.

“He made an impact on the area almost straight away. He embraced all aspects of Longford life,” local man John Fay told the Leader.

The Leitrim man, as much as he likes to shy away from the spotlight, holds a huge passion for sport and played a pivotal role in the establishment of state-of-the-art handball facilities in the area. His first task was sourcing much-needed funds and this he achieved through tireless fundraising escapades and a successful application for National Lottery funding.

“It wouldn’t have happened without him. He made a big push to get it over the line. For such a small parish, we now have phenomenal facilities and it is because of him.” John added.

Such was Fr Michael’s dedication to the area, he took on the role of GAA club chairperson in 2003, a position he held for twelve years. In his new position, he was fundamental in the development of the Abbeylara GAA pitch. He was in command as the club purchased new grounds and developed the amenities at Ballyboy, with works coming in at a final cost of €600,000.

The work didn’t end there though, as Fr Michael also aided in the upgrades of the local primary schools. His contributions continued through the years and he was the main instigator in the high-quality restoration of the two churches in the area.

“He was the driving force behind all the developments in the area, church and sport-related,” John Fay said.

Although already having etched his name into Abbeylara folklore through his contributions, Fr Michael's work continued and led to the village finally opening the doors to its new €1.2m state-of-the-art parish centre .

Though Fr Michael drastically undersells his involvement through the years, locals are under no illusions as to who is responsible for the regeneration of the area.

“He influenced every aspect of life in the area. Everything progressive in the parish he has been a part of and in many incidences, pioneering them,” remarked John Fay.

Fr Michael helped transform Abbeylara into what it is today and the Cathaoirleach award winner will be remembered for his work for many years to come.