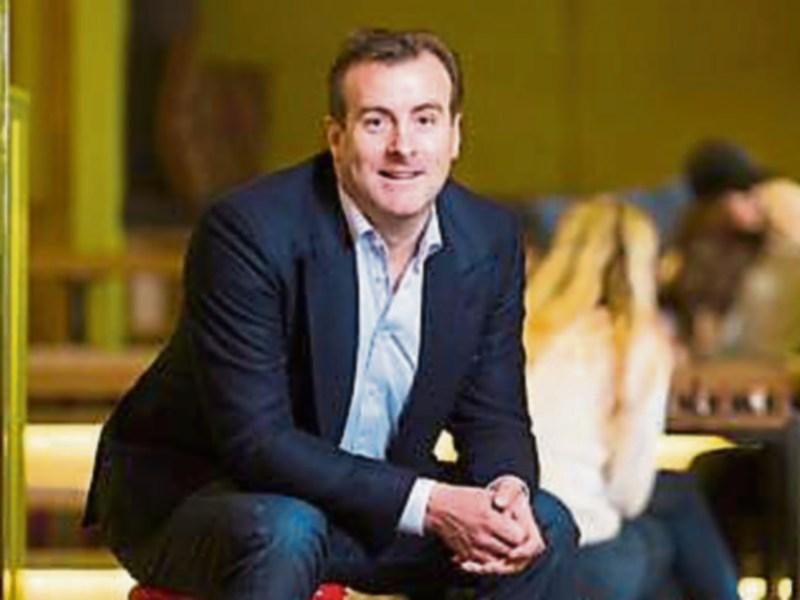 He was a man that used to tell people that the last thing he wanted to be was the chief executive of a public company.

But, as he says himself, life sometimes takes unexpected turns and now he is one!

The company made headlines last month when its shares soared more than 9pc after it committed to paying a supplementary dividend to shareholders on top of a final dividend.

The company also said that it might pay further supplementary dividends or consider share buybacks to return cash to shareholders.

The share surge came despite adjusted after-tax profits at the company slipping last year to €19.4m from €21m in 2015, as it contended with a challenging environment that was punctuated by terror attacks and Brexit.

“We were a private company initially,” the Hostelworld CEO told the Leader, before pointing out that it held a strong track record of cash generation over the last 15 years.

“It floated then on the Dublin and London stock exchange in 2015.

“Terrorist attacks and Brexit all impacted upon the company and the Brussels bombing last year also negatively affected the business.

“We announced our dividend last week and promised a further €10m to our shareholders which I believe is very encouraging,” the graduate of St Mel’s College in Longford and University College Galway (UCG) continued.

“There is stronger growth now and our share price is up 20%.

“This is also an opportunity for us to acknowledge our shareholders and investors who stuck with us through the difficult times.”

Hostelworld’s marketing strategy has focused on positioning the hostel experience as fun and distinctive from hotels.

Rapper 50 Cent and actor Charlie Sheen are among a number of celebrities enlisted for campaigns.

The company has evolved exponentially since the Melview native’s inception in 2002.

In the first six months the business got itself to break-even point; then it did its first acquisition - rivalhostels.com in 2003.

Major change came then when private equity company Summit Partners took a majority stake in the business in 2004.

Then in 2008, Mooney took over at the helm and became CEO.

It was while studying in UCG that he began exploring his business skills and subsequently established a tuxedo rental company.

The Longford man said,  that at the time, he realised that all the clubs and societies at the university were holding black tie dinners and all the guys were going into the city and paying a fortune to rent a tuxedo.

“I knew that I could buy then relatively cheaply, so I went to AIB, got a loan and bought 100 tuxedos and bow ties.

“I started renting them out at a cheaper rate on campus.”

He says he always had an entrepreneurial streak.

“My father was an accountant so that probably influenced me and my grandfather was probably also a big influence on me,” he continued.

“He had a drapery shop and from that perspective, I suppose I was always interested in the idea of buying and selling things.”

It was during a 'chance meeting'  in 2002 when he was introduced to Ray Nolan and Tom Kennedy, founders of Hostelworld, that Feargal Mooney set out  a journey he had not anticipated.

With a solid background in finance, Mooney was the perfect candidate to come on board and while he did so, he envisaged staying for maybe three or four years.

The son of Des and Anne, Mooney, Feargal is married to Sinéad (nee Martin) who is also from Longford.

After completing his education with a masters in DCU, the Hostelworld CEO travelled to the US where he worked as a financial analyst with Pfizer.

He stayed there for five years and then returned home.

“I worked for Pfizer in New York and returned to Ireland around 1998,” he told the Leader.

At that stage, he had met Sinéad and he thought he might give up the corporate world altogether.

The pair decided to turn their hands to running a B&B in Killarney.

“We did that for a year; it was very hard work running a B&B and I didn’t realise that at the time,” he laughed, before pointing out that he returned to Dublin and shortly after took up a position with IT security firm Baltimore Technologies.

Meanwhile, Hostelworld has become a big player in global markets and Mooney finds himself travelling a lot.

“My job is a global business and I am on a plane two weeks out of three,” he said, before adding that while he would like to visit Longford more often, his primary concern - once he gets off the plane - is to get home to see Sinéad and the kids.

“When I was growing up in Longford, it was a great town,” he recalled.

“It was a place where you knew everybody; even though we lived out in Melview, we spent  a lot of time in Longford town.

“In the end I ended up marrying a girl from Longford and sure, that says it all really!”

Looking to the future, Mooney says that Hostelworld is open to looking at acquisitions though it is not in talks with anyone at the moment.

“We will remain very focused,” he added.

“We are not going to go out and buy some hotel-booking business or something that is kind of left-field.

“We want to make sure it is something that is complementary.

“We are pleased with where things are at but there is still a lot of work to do.”