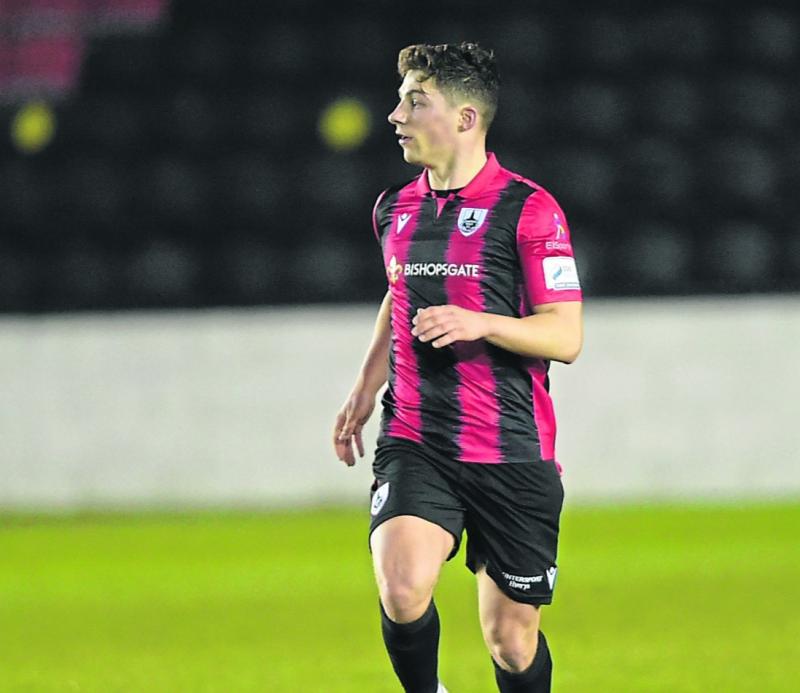 Longford Town defender Dylan Barnett, who scored a spectacular goal to break the deadlock in the 14th minute of the league clash against Cork City

Cork City may be on the way to winning the First Division title but the league leaders had to come from behind twice to deny Longford Town a win in the eventual draw at Turners Cross on Friday night last.

It was still a terrific result for Gary Cronin’s side who extended their impressive unbeaten run to five games on the path to the promotion play-offs.

Town goalkeeper Luke Dennison was in superb form in producing a string of great saves, starting with a double point-blank stop just before the break and who was at his brilliant best to keep out goalbound efforts from Barry Coffey in the 59th and 86th minutes.

The highlight of the entertaining match that attracted the big attendance of 2,731 to Turners Cross in anticipation of a home win was the sensational strike from Longford Town defender Dylan Barnett.

Barnett fired a cracking long range shot into the top corner of the net to break the deadlock in the 14th minute and that was the way it remained until half-time, much to the frustration of the home supporters.

Midway through the first half, the Town created a good chance of scoring a second goal but Sam Verdon was unable to make a proper connection from a close range header.

Shane Elworthy was then through on the half hour mark but was unable to find way past the Cork keeper David Harrington.

City gradually got their act together to engineer a few decent chances and eventually equalised in the 59th minute. A shot from Cian Coleman hit the underside of the crossbar with the alert Coffey pouncing on the rebound to find the back of the net.

The Town refused to be rattled in showing a lot of character to regain the lead in the 66th minute through Jordan Adeyemo who scored from a fine header after connecting with a left wing cross from Dylan Barnett.

Cork then had a goal disallowed for a foul on Luke Dennison but got back on level terms in the 82nd minute when Barry Coffey got the vital touch to snatch his second goal.

Coffey was denied his hat-trick and a late winner when Dennison came to the rescue again with a wonderful save in the 86th minute.

In consolidating their fourth place position in the league table, a point was a deserved result for Longford after playing really well in the first half.

With a bye in the nine team First Division this weekend and a direct clash with the FAI Cup quarter-finals after that, the Town will have to wait until Saturday September 24 for their next fixture against Treaty United at Bishopsgate.