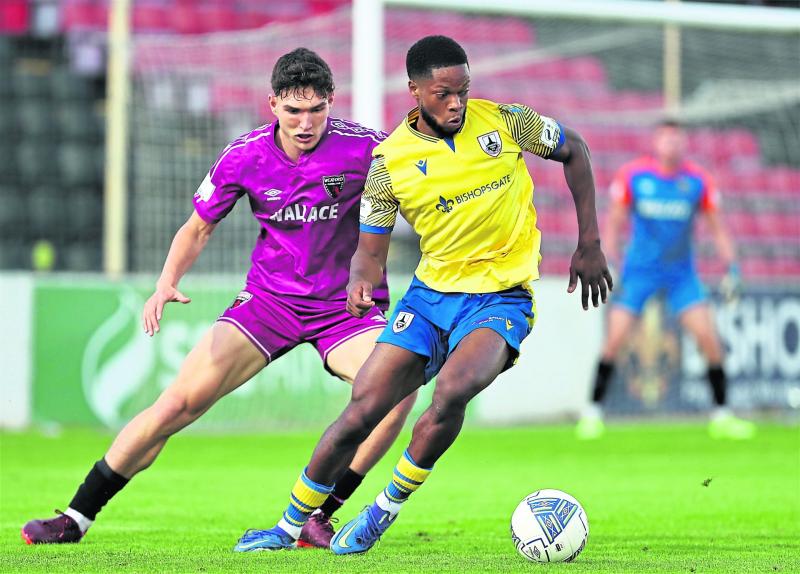 As the league moves to its final games in the coming weeks, Longford Town take on the First Division table toppers Cork City at Turners Cross this Friday night, kick-off 7.45pm.

Cork are now seven points ahead of faltering Galway United and there is no doubt that City manager Colin Healy has assembled a title winning side and the fact that they are full time is a big plus as they chase a return to the Premier Division.

There are three full time clubs in the First Division and it's ironic that those three teams are the top three in the table after 26 games played to date.

Cork's record is very impressive indeed with 18 wins, 6 draws and only two defeats to date. In the three meetings against the Town this season, Cork hold the bragging rights with a win and two draws.

Longford’s two home games ended in draws and in the away game the home side had a flattering 4-1 victory. The first game between the clubs which was played in Bishopsgate back on March 5 was 0-0 but this was a very exciting competitive game despite the lack of goals. The second meeting between the clubs at the end of April ended 4-1 in favour  of Cork. Sam Verdon put the Town ahead in the 44th minute but the home side equalised a minute later which was an unfortunate OG from Michael Barker.

Cork were getting on top early in the second half and they took the lead in the 55th minute courtesy of a Barry Coffey goal. Barry scored his second of the night when he added Cork's third goal in the 84th minute.

The Town were chasing the game at this stage and the home side did enough to deny the Town any real scoring chances. Darragh Crowley scored goal number four in the 89th minute.

The third meeting between the clubs was played on June 18 and the Town gave a great account of themselves despite going behind very early in the game. Cian Bargary gave the visitors the lead at Bishopsgate after only sixteen minutes but Karl Chambers came up trumps with an equaliser in the 85th minute.

The Town go into Friday's game at Turners Cross on the best run for some time, having won the last four league games and manager Cronin must be very happy with the progress of his team.

Gary has done a lot of hard work to put a good workmanlike squad together that would be capable of getting to at least the play-offs and he has almost certainly achieved his goal at this stage.

A lot of injuries have hampered the progress of this new look Town squad with the bad injury to Darren Craven being a massive loss.

The transfer of Ryan Graydon is another major blow to Cronin's promotion ambitions but one has to say that Gary has got on with the job and has done extremely well under the circumstances.

One very pleasing feature recently is the fact that the Town boss has included some of the very exciting prospects who are coming through from our under 19s into the first team squad.

On Sunday our under 19s were so unlucky to lose 2-1 to a very useful Drogheda United team at Bishopsgate. Some of the football served up by both teams was great to see and there is no doubt that the club have some very talented players in all our underage squads and let's hope that those young talented players will form a great production line in years to come.

Cork are on top of the table at the moment on merit. They may have only lost twice in 26 games but they are beatable and we are in no doubt that the Town will push them all the way on Friday night.

Such is the strength of the Cork squad that they have cover for every position in the team. Keeper Harrington, who didn't play in the Cup defeat in Derry, is one of the best prospects in the league at the moment and there are rumours that there is cross channel interest in signing him.

The Cork team that started against Derry City in the Brandywell on Friday last in the FAI Cup included two former Longford Town players. Aaron Bolger played with the Town recently as did Dylan McGlade.

Kevin O'Connor is a key player while Ruairi Keating is a great attacker.

Ally Gilchrist didn't make the starting eleven in the Brandywell on Friday, like Louis Britton who more than likely were being rested for the run in of games in the league.

Keating received a red card in the Brandywell on Friday and with Cork exiting the FAI Cup he may miss Friday's vital league game.

The Town will go into Friday's game in a confident mood after four straight wins in the league and they will relish a game against one of the top teams in the league.