Longford Town looking for another positive result away to Bray Wanderers 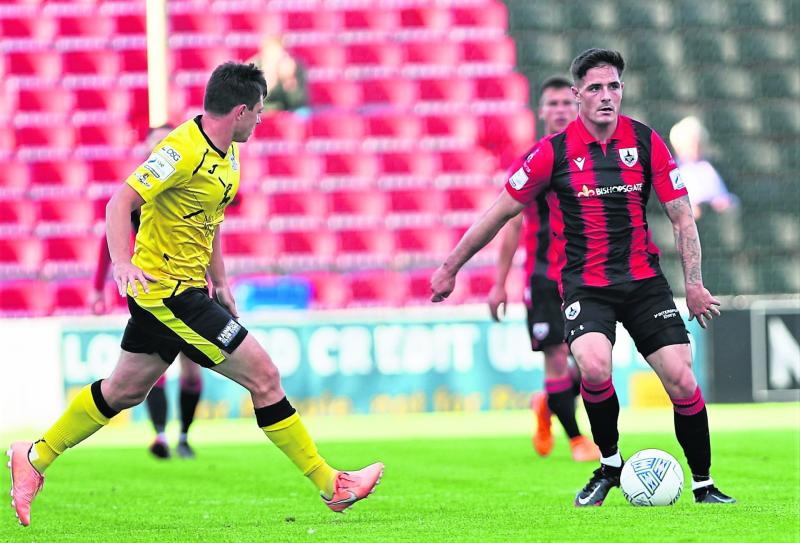 Longford Town will be looking for another positive result in the SSE Airtricity League First Division against Bray Wanderers at the Carlisle grounds this Friday night, kick-off 7.45pm.

It will be like a home game for Gary Cronin as he was the manager of Bray before joining the Town at the beginning of this season.

During his time as the Bray boss, Gary guided his former club into the promotion play-offs and he is well on course to repeat the feat with Longford.

It would take a total collapse at this stage to keep the Town out of the play-off places at the end of the season. Friday night's game in Bray sees the commencement of the fourth and final round of games which leaves eight games left and that will give Gary Cronin a chance to run the rule on his latest signings.

Longford have some new faces in the team and there is no doubt that Darren Clarke, Jordan Adeyemo, Mark Hanratty, Adam Verdon along with other recent arrivals have strengthened the squad considerably.

The two goals that the Town scored in the win over Cobh on Saturday night were scored by Adeyemo and Hanratty.

The loss of Darren Craven for the rest of the season is hard to take but manager Cronin had to move on and he brought in replacements and also gave some of the younger players in the squad a chance.

Matthew O'Brien, who has come through the under 19s, had a great game against Cobh as did new signing Darren Clarke while Dean McMenamy controlled the midfield sector with Aaron Robinson out suspended for yellow cards.

The defence all played very well and keeper Luke Dennison made crucial saves during the game in keeping another clean sheet.

Loanee Mark Hanratty showed that he will be a huge plus to the Town as they chase vital points in the remaining eight league games in the push for a place in the promotion play-offs.

A fully fit Cristian Magerusan would be a big goal threat to all opposing defenders and he showed in the final minutes of the game that he will pose big problems for the other teams in the First Division.

If the Town can utilise the current squad we can look forward to many good results in the run in.

The Town played Bray three times already and it's honours even with one win each and a drawn game.

The first meeting between the clubs was played in mid March and the new look Bray club (amalgamated with Cabinteely) snatched the three points in a 2-1 win.

Sam Verdon gave the Town the lead in the 9th minute but the visitors bounced back with goals from Kurt Byrne in the 21st minute and the winner from Paul Fox in the 39th minute.

The second meeting was in mid April and it was at the Carlisle grounds. Former Town favourite Rob Manley scored the Bray  equaliser in the 79th minute after Michael Barker had given the Town the lead in the 54th minute.

The game was won with an excellent goal from Darren Craven in injury time as he ran through from the halfway line to score one of the goals of the season.

The third game between the teams was at Bishopsgate and that game ended all square. Former Town favourite Rob Manley gave the visitors the lead after 24 minutes and the good news is that he will not be around on Friday as he has since transferred to big spending Galway United.

Rob gave Bray the lead but the Town fought back and Michael Barker equalised just before half-time.

One player who will not be playing against us on Friday is former Town keeper Michael Kelly who has left the club to chase a career in England.

They have Stephen McGuinness as a back up in goal and they also have Hugh Douglas who has scored many vital goals for his team especially in free kick situations.

Conor Clifford has experience from the Premier Division and he is a man who is capable of turning a game in favour of his club as is Kurtis Byrne who joined the club this season after being with Athlone Town.

Kieran Marty Watters is the main threat up front but seems to be getting it hard to get in the starting eleven this season.

The game against Bray will be tough as usual and we expect a big battle to get the full points.

There is no doubt that our form has been erratic recently but we need full points to keep us in fourth position with Treaty United and Wexford also battling for points and a place in the play-offs at the end of the season.