Longford Town away to Waterford in quest for positive result 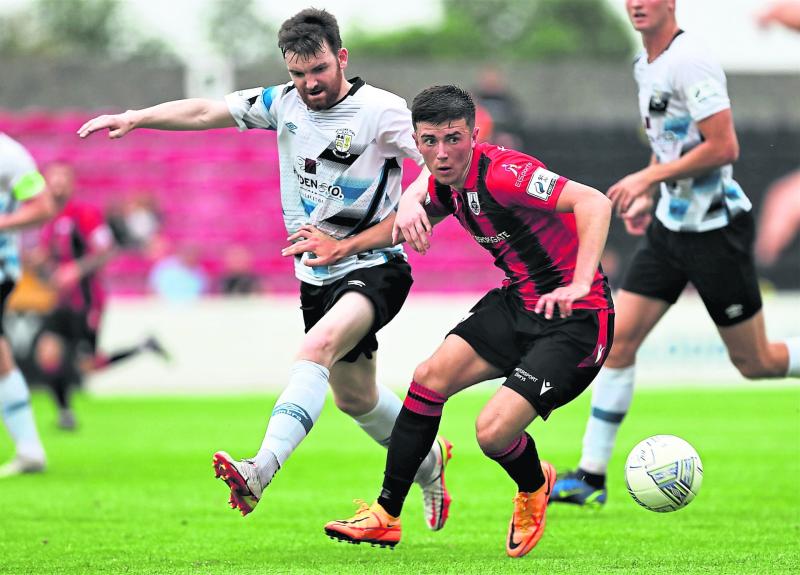 Newcomer Kian Corbally on the ball for Longford Town against Athlone in the First Division clash at Bishopsgate on Saturday night last Photo: Syl Healy

Longford Town make the long journey to the RSC this Friday to play Waterford in the next round of the SSE Airtricity League First Division, kick-off 7.45pm.

The Town, who defeated second in the table Galway 2-0 recently, have suffered a slump in form after losing their two recent games to Treaty United and Athlone Town.

To say the loss to Athlone was an embarrassment would be an understatement. Not for the first time this season our lack of goals is beginning to affect our performances and we have been punished in the games against Treaty and Athlone.

Not putting the ball in the opposition net is a problem but when you play a team who are bottom of the table you expect to win but their keeper Velliun was inspired in the Athlone goal.

He made at least four excellent saves and he was the main reason that Athlone won and that was alongside our awful shooting in front of goal.

The Town gave a full debut to striker Jordan Adeyemo and Kian Corbally on the left wing.

Adeyemo came on as a sub against Treaty and he started on Saturday due to Sam Verdon's suspension for his sending off at the Markets Field.

18 year old Corbally joined the club on loan from St Patrick's Athletic and he will need to get some playing time  to make an impact in the First Division.

The loss of Ryan Graydon, who scored for Derry City against Finn Harps on Sunday, and the injury to Darren Craven has left us very light in the midfield sector but young Matthew O'Brien is showing great promise.

Karl Chambers was so unlucky to have his excellent goal in the first half disallowed for a supposed handball. The Athlone opening goal was an excellent effort by striker Thomas Oluwa but the free that Athlone got in the lead up to the goal wasn't a free but the referee thought otherwise.

The two second half goals for Athlone were a comedy of errors and we hope that that is the end of the gifts for the rest of the season.

Another new signing came on in the second half and he made his debut against his previous club. Midfielder Brandon McCann who previously played with Athlone joined the club during the week.

The defeat on Saturday last and the setback the previous week in Limerick has put a lot of pressure on the Town to stay in the promotion playoff places and one must hope for a massive improvement in the coming weeks.

The visit to the RSC on Friday will be a tough assignment for Gary Cronin's team as Waterford have assembled a very strong squad for the promotion run-in. They signed a new player on Sunday last when they brought in attacking midfielder Remi Thompson. His arrival strengthens the Waterford squad who have many cross channel players.

Keeper Brian Murphy may be in the twilight of his career at age 39 but he has over 11 years experience in England as a full time professional and you can't buy experience like that especially in the First Division. Killian Cantwell and Darragh Power are having outstanding seasons for the Blues.

Former under 17/19 player Niall O'Keeffe has been a revelation in midfield where he is partnered by former Charlton player Junior Quitirna who scored against Cobh Ramblers on Friday night last.

Striker Cian Kavanagh added another goal for the season against Cobh and he is a danger in front of goal if given the space.

Waterford added a new striker to their squad in the July transfer window and he has paid dividends immediately. Wassim Aouachria is a 6' 2” attacker  who has joined the club from Charlton and he scored two goals on his debut in Cobh.

The fact that Waterford scored five times without possibly their best player Phoenix Patterson speaks volumes about the strength of their squad. The experienced Eddie Nolan wasn't in their squad either against Cobh.

The teams have played each other twice to date with the first meeting in early April ending one all.

Shane Elworthy gave the Town a deserved lead on 36 minutes with Louis Britton (who is now playing for Cork) equalising in the fourth minute of additional time to give the home side an undeserved draw.

When the teams met at Bishopsgate in late May the visitors ran out 3-0 winners with the highlight of the night being the solo goal which was scored by Phoenix Patterson.

Looking at all the facts there is no doubt that the Town face a tough 90 minutes at the RSC on Friday. Hopefully the team has got rid of the bad form shown recently and they bounce back with a positive result against Waterford.