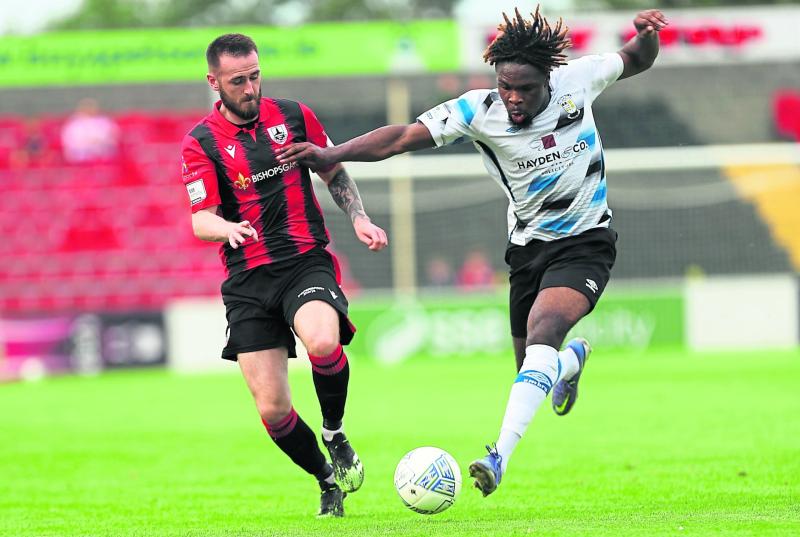 Shane Elworthy pictured in action for Longford Town in this tussle with Athlone opponent Thomas Oluwa in the league clash at Bishopsgate on Saturday night Photo: Syl Healy

In producing what can only be described as a dismal display, Longford Town suffered a shock defeat against bottom of the table Athlone in the SSE Airtricity League First Division clash at Bishopsgate on Saturday night last.

The star of the show for the visitors was their outstanding goalkeeper Vladislav Velliun who made a string of terrific saves during the course of the midlands derby and this was a serious setback for Gary Cronin’s side in the battle for a place in the promotion play-offs.

Showing the greater urgency against a complacent Longford team, Athlone picked up their first points away from home this season and the deadlock was broken in the 43rd minute when Thomas Oluwa found the back of the net from a cracking overhead kick.

Things went from bad to worse when the Town gifted Athlone a second goal in the 65th minute. In a total lack of communication at the back, Michael Barker directed a header into his own net after advancing keeper Luke Dennison was left stranded in his attempt to clear the danger.

Longford were given a glimmer of hope when a close range shot from new signing Kian Corbally (on loan from St Patrick’s Athletic) was deflected into the Athlone net by substitute Dean McMenamy in the 70th minute.

The equaliser almost materialised in stoppage time when a long range strike from Aaron Robinson produced an excellent save from the opposing keeper Velliun.

Longford’s tale of woe was complete in the fourth minute of additional time when Adam Lennon was clean through with only Dennison to beat and he kept his composure to score the killer third goal.

It's been a long time since the Town last lost against Athlone in the League of Ireland and this was a miserable game the manager Cronin and his underachieving players will want to forget in a hurry.

Minus the suspended Sam Verdon, it would probably have been a different story had Cristian Magerusan scored from a close range header in the 5th minute but the Town striker was denied by the Athlone keeper who produced a great save to keep his net intact.

The visitors then created a few half-chances and Longford had a goal disallowed in the 24th minute when the scorer Karl Chambers was penalised for handball which appeared to be a harsh decision.

Gary Armstrong weaved his way through the slack Town defence in another Athlone attack, only to shoot straight at Dennison before Aaron McBride went close from a glancing header.

Their perseverance was eventually rewarded just before the break with the spectacular goal from Thomas Oluwa after he made the perfect connection from a Patrick Hickey header across the face of the goalmouth.

That was really putting it up to Longford and they almost conceded another goal in the early stages of the second half when a header from Hickey was cleared off the line by Corbally.

Another setback was suffered when Cristian Magerusan was forced to retire injured in the 51st minute and then Adam Lennon broke through the Town defence but he got no power behind his subsequent shot.

Longford were most unfortunate not to get back on level terms in the 64th minute when a well struck Dylan Barnett free-kick hit the crossbar and moments later they pressed the self-destruct button with the concession of the terrible own goal.

The action quickly switched to the other end of the pitch with the Athlone keeper Velliun producing a wonderful save to keep out a cracking strike from Aaron Robinson before the Town pulled a goal back with Dean McMenamy getting the vital touch.

That was as good as it got for lethargic Longford as gritty Athlone stuck it out to emerge victorious and it was no more than they deserved for a lot of hard work.