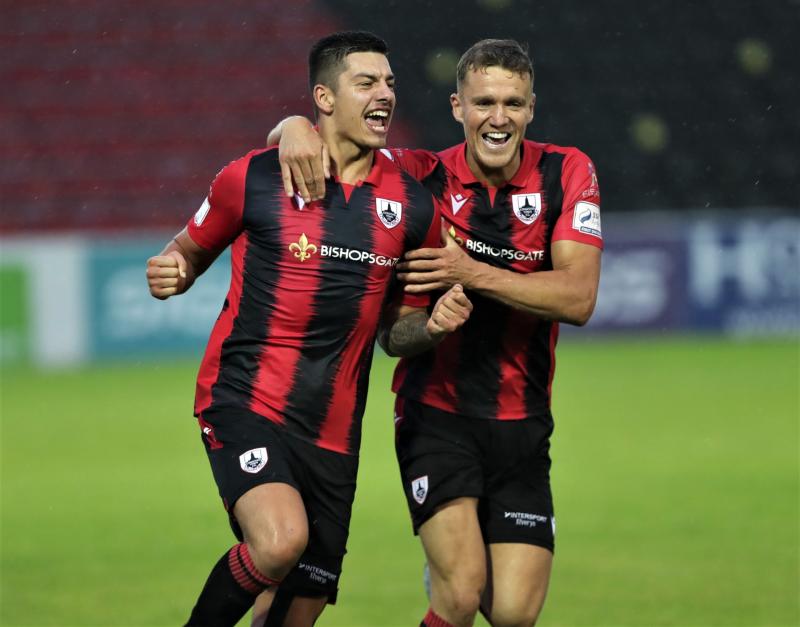 After creating a number of great chances in a dominant first half display, the Town eventually broke the deadlock in the 62nd minute when a header across the face of the goalmouth from Mick McDonnell was finished to the net by the boot of Cristian Magerusan.

Razor sharp striker Magerusan was a constant threat for the under pressure Galway defence and the Longford matchwinner made absolutely certain of this impressive home win when he scored the killer second goal in the 82nd minute.

Magerusan directed a close range header past the opposing keeper Conor Kearns after connecting with a Dylan Barnett corner as Gary Cronin’s slick side clinched a well deserved victory which was achieved without suspended duo Dean McMenamy and Sam Verdon.

Twice in the early stages of this windswept battle a highly charged Longford team were denied a goal with the first attempt from Cristian Magerusan saved by the foot of Galway keeper Kearns in the 3rd minute.

Moments later a header from Magerusan hit the crossbar in another lucky escape for the visitors and the Town continued to pile on the pressure with Ryan Graydon just off target from a header.

Galway’s first attempt materialised in the 19th minute when a long range strike from Conor McCormack was tipped over the bar by the Longford netminder Luke Dennison who made another fine save to stop a point-blank shot from Ed McCarthy in the 33rd minute.

In between that particular period of the match the home side created three great chances of scoring a second goal and first up was Aaron Robinson whose strike was well saved by Kearns in the 23rd minute.

A Michael Barker header was then blocked by a Galway defender and Magerusan miskicked from a few yards out when he looked certain to score in the 28th minute after outstanding defender Dylan Barnett fired in a defence splitting left wing cross.

Somehow the teams ended up scoreless at half-time when Longford should have been at least a couple of goals in front and it was all becoming very frustrating for the loyal home supporters who braved the bad weather on a cold night in the supposedly summer season.

One can only admire the manner in which Gary Cronin has his team playing an exciting brand of attacking football and resilient Town were rewarded for their sheer perseverance with the first goal from Magerusan.

With 62 minutes gone on the clock a short corner from Barnett was played out to Joe Power who fired a cross into the box and the subsequent header from defender McDonnell fell at the feet of Magerusan who made no mistake from a cracking finish.

The Town were in no mood to let a significant win slip from their grasp and there was a strong claim for a penalty when Karl Chambers was brought down in the box in the 74th minute but there was no whistle from the referee who apparently deemed the contact insufficient.

Whatever hopes the very disappointing full-time professional Galway outfit had of salvaging the situation were dashed when Magerusan planted a firmly struck header into the back of the net for his second goal in the 82nd minute.

Lack of consistency had cost Longford quite a few league points this season but they have now beaten the title contenders Galway twice at Bishopsgate this season and have no reason to fear whoever they end up facing in the promotion play-offs which looks like a done deal.

Due to the bizarre structure of the nine-team First Division, the Town have no game this weekend and will be back in league action against Treaty United at the Markets Field on Friday July 8.

Subs:- Jordan Adeyemo for Dimas; Francely Lomboto for Waweru and Stephen Walsh for Boylan (all in the 73rd minute); Shane Doherty for McCarthy (83 mins); Charlie Lyons for Portilla (84 mins).