Longford Town away against Wexford on Friday; home to Galway on Monday night 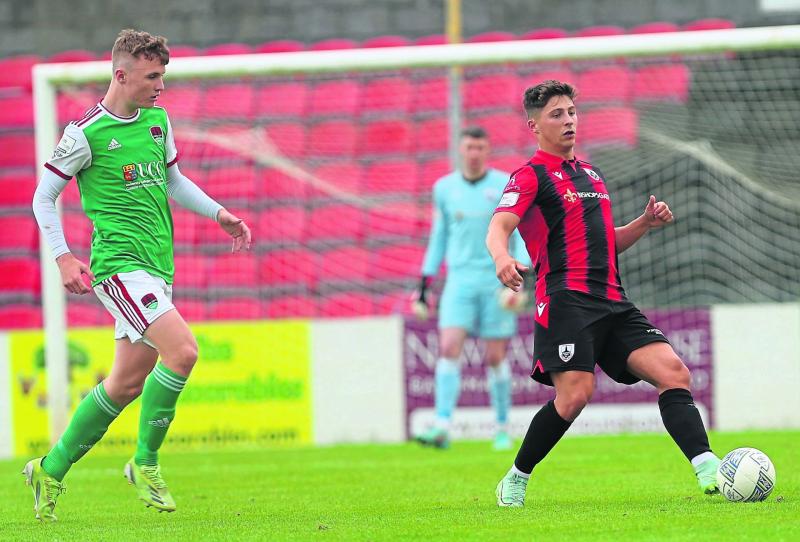 Longford Town face two tough games over the weekend when they play Wexford this Friday night in Ferrycarrig Park and then take on the league leaders Galway United at Bishopsgate on Monday next, kick-off 7.45pm.

Not for the first time this season the First Division have two games over the weekend which is really crazy,  especially for an amateur league with the exceptions of Cork City, Galway and Waterford who are all full time clubs.

As stated before it is no surprise to see all three clubs occupying the top three positions in the table. Going into last week's fixtures Cork City were leading the table.

Galway were a point behind and played Bray away on Friday night and won easily on a 5-1 scoreline with former Town player Stephen Walsh scoring twice as John Caulfield's side showed that they are the form team in the league this season.

The game on Saturday night between the Town and Cork was one of the best games seen at Bishopsgate for many a day with end to end football and no one stood back as both clubs chased three valuable league points.

The Town had midfield dynamo Aaron Robinson back after missing the Bray game due to suspension for his accumulation of points and he made a huge difference in the crucial midfield area.

Those present at the game would agree that it was a cracking contest and the Town deserved to take full points as a few dubious decisions by the referee didn't help the Town cause.

Cian Bargary gave the visitors the lead with an unstoppable shot from over 30 yards that beat the helpless Luke Dennison in the Town goal.

It was real end to end football but anyone present at the game wouldn't be able to pick out the full time squad in the heat of this exciting game. All the Town players gave 100% as they chased the win.

Cristian Magerusan gave a good performance and there is no reason why he will not get lots of special goals when he gets back to full fitness.

The two full backs Shane Elworthy and Ben Lynch were going forward for the full 90 minutes and they had the Cork defence under pressure for long periods during the game.

Karl Chambers was a Town hero yet again when he scored the equaliser for the Town in the closing minutes of the game to give Gary Cronin's side a deserved draw and with a bit of luck they could have taken all three points.

That is the second draw for the Town against Cork and supporters will be hoping for a similar home result for the Town as in the previous match between the Town and Galway at Bishopsgate.

The first meeting between the clubs at Bishopsgate ended 2-1 in favour of Longford. Galway took the lead early on when Mick McDonnell put through his own goal.

Team captain Sam Verdon equalised just before half time and Darren Craven got the all important winner in the 77th minute.

The second meeting between the clubs at Eamon Deacy Park in early May ended 2-0 to the home side with goals from David Hurley on 50 mins and Max Hemmings scored the second goal on 72 mins.

Town midfielder Dean McMenamy was sent off late in the game.

In the two meetings between the clubs this season there was not a lot between the teams and no doubt Monday will be no different.

The Town have a long journey on Friday night when they travel to Ferrycarrig Park to play the fast improving Wexford side who travelled to Cobh on Friday night last and they went away with three points by virtue of a 3-0 victory.

Two of the goalscorers were former Town players.  Conor Davis opened the scoring on 52 minutes and Jack Doherty added number two on 75 mins.

That win has Wexford in 6th place and only three points behind Treaty who are in the final play-off spot in the table.

This new look Wexford side are very hard to beat since Ian Ryan took over as manager and the arrival of many new players. The team has a real Town look about it with over half the team former Town players.

Longford won the two meetings to date between the clubs with the first game in Ferrycarrig Park ending in a 3-0 victory for the visitors.

Dylan Barnett scored the opening goal in the second minute. Ryan Graydon added goal number two on 19 minutes and Aaron Robinson also got his name on the scoresheet.

The second meeting between the clubs took place on May 7 and the Town had to fight all the way to get a 2-1 result at Bishopsgate.

Jack Doherty gave Wexford the lead after only two minutes but Eric Molloy equalised on 25 minutes. Sam Verdon was the Town's saviour when he scored the winner in the fourth minute of stoppage time.

Hopefully the players who picked up niggling injuries in the Cork game will be fit and the Town will be up to full strength for the two crucial games coming up.

With the July window opening for new signings there is talk about new players coming in to strengthen our small squad.

If the team can replicate the performance against the title contenders Cork City, then they can gain positive results in the upcoming two games against Wexford and Galway.