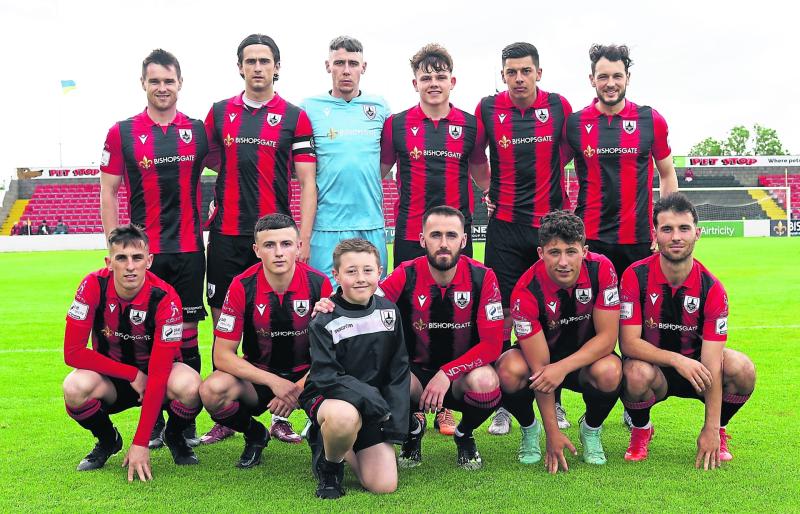 The Longford Town team that started against Bray in the First Division game at Bishopsgate on Friday night last are pictured with mascot Rhys Kelly Photo: Syl Healy

Cork are one of three full time teams in this year's First Division championship along with Galway United and Waterford FC and they occupy the top three positions in the table at the moment.

The Town are in a comfortable position in the table at the moment and we look destined for one of the promotion play-off positions.

Three weeks ago Galway were sitting on the top of the table and were at home to Cork who were second in the table.

Under the managerial skills of Colin Healy, Cork travelled to Eamonn Deacy Park and left with a victory and three points that moved them over Galway and into top spot.

Last weekend Cork were to play Waterford in the league and that was called off because of international duty.

The Town have played Cork City twice already this season and Cork have the bragging rights after drawing at Bishopsgate and winning in Turners Cross.

The first meeting at Bishopsgate ended 0-0 on the first Saturday in March. Both teams had chances to score but a good combination of top class defending by the Town earned them a point.

The second meeting between the clubs was played at the end of April at Turners Cross and the home side had a 4-1 victory.

The Town took the lead in the 43rd minute but the home side got back on level terms two minutes into injury time when Michael Barker scored an OG Barry Coffey put the home side ahead in the 56th minute and he added to the Cork tally in the 84th minute.

Darragh Crowley scored goal number four for the home side to give the league leaders a rather flattering victory. When people look at that result they think it was a real hammering which is far from the truth but the Town will want a much better performance on Saturday to achieve a positive result.

Cork have some very good players in their squad, many have lots of Premier Division experience which is a great bonus for the manager as he chases a return to the Premier Division.

Dylan McGlade, who played for the Town a few years ago, could be back in the team for the trip to Bishopsgate on Saturday after missing a big part of the season due to injury.

Defender Kevin O'Connor has many years experience in the League having won the double in 2017. He won promotion to the Premier Division last season with Shelbourne where he was one of the stars all season.

Make no mistake about it, this isn't a two or three man team as they have a fantastic first eleven but they are equally as strong on the bench.

It will take a valiant effort from the Town to get a result against Cork who are strong contenders for the league title and automatic promotion.

The other two big spending teams, Galway and Waterford, might have different ideas in the chase for promotion.

The Town are in a grand position in the table with a play off spot almost guaranteed but will have ambitions to better their current fourth place position.

Last Saturday night the Town played Pat Devlin's Bray who are also looking to get into the play-off spots.

The Town had to play without Aaron Robinson due to his collection of yellow cards and there is no doubt that he was missed in the vital midfield area.

The visitors took the lead in the 24th minute and it was scored by former Town striker Rob Manley who ran through unchallenged and put the ball under the advancing Luke Dennison to give the visitors the lead.

The Town got the equaliser in the 42nd minute and it came from Michael Barker who headed a corner past former Town keeper Michael Kelly who clawed the ball out but the ball had gone over the line.

Shane Elworthy had a great game and he caused many problems for the under pressure Bray defence with his many penetrating runs down the right wing.

Cork City will be in a confident frame of mind but the Town are capable of springing a surprise against the league leaders in the eagerly awaited clash at Bishopsgate on Saturday night.