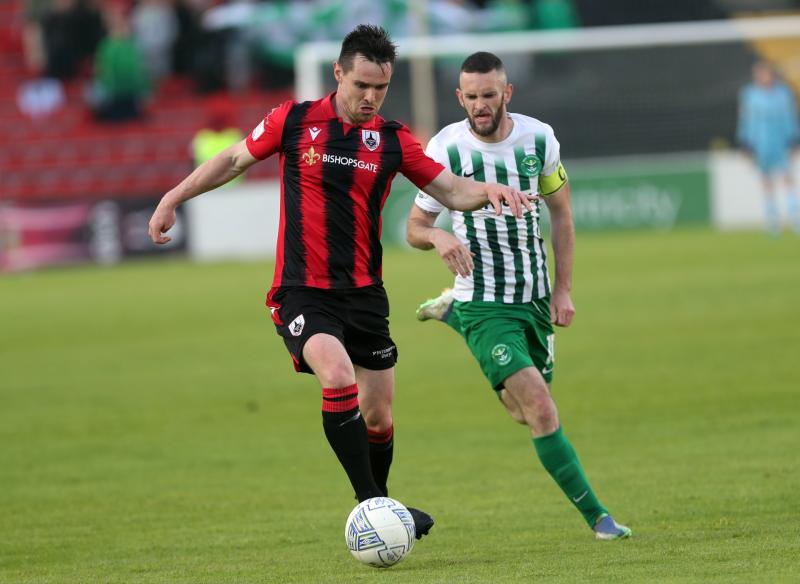 Longford Town goalscorer Michael Barker on the ball against Bray in the league game at Bishopsgate on Friday night Photo: Syl Healy

While the result was disappointing from a Longford Town point of view, the SSE Airtricity League First Division match at Bishopsgate on Friday night was marred by the terrible behaviour of a section of the flare flying Bray Wanderers supporters.

While the result was disappointing from a Longford Town point of view, the SSE Airtricity League First Division match at Bishopsgate on Friday night last was marred by the terrible behaviour of a section of the flare flying Bray Wanderers supporters.

Disgraceful scenes, to say the least, as some out of control Bray fans made it extremely difficult for the brave Longford stewards who were subject to serious hassle in their efforts to defuse the situation.

The Gardai were eventually called to deal with the shocking crowd trouble with some Bray fans removed from the grounds during the course of the second half.

Things were beginning to boil over when one of the vociferous bunch of Bray followers, pitched behind the Town goals in the first half, threw a flare in the direction of the Longford keeper Luke Dennison with 28 minutes gone on the clock.

Things got even worse when the same contigent of so-called Bray fans moved to the away section of the ground and the abuse they hurled at the volunteering Town FC stewards was outrageous.

On the pitch it was the visitors who broke the deadlock in the 23rd minute when former Town striker Rob Manley shot past the home keeper Luke Dennison.

Bray then created a couple of other great scoring chances with Dennison producing a fine point-blank save to keep out a header from Manley.

Longford (minus the suspended Aaron Robinson) equalised in the 42nd minute when a bullet of a header from defender Michael Barker was saved by ex-Town keeper Michael Kelly but the linesman deemed that the ball had crossed the line.
While Bray were reduced to ten men when Eoin Massey was dismissed for a second yellow card foul in the 75th minute, they succeeded in holding out for a hard earned draw.

Sam Verdon squandered a clear-cut chance in the 3rd minute as Longford made a strong start to the game but Bray gradually got on top and took the lead when Kieran Marty Waters sent Rob Manley through for a well-taken goal.

Manley almost scored again in the 32nd minute when he was denied by Dennison and moments later there was another lucky escape for Longford with Bray defender Kevin Knight directing a close range header narrowly wide.

The Town were soaking up the pressure and hardly deserved to be on level terms at the break with Michael Barker getting the goal late in the first half.

While Longford were the better side in the second half, they continue to lack a real cutting edge in attack and are badly in need of a recognised striker.

After Sam Verdon shot narrowly wide in the 55th minute, Cristian Magerusan connected with a cross from the impressive Shane Elworthy but the header was just over the bar as the home side went in search of a winning goal.

Town substitute Callum Warfield then failed to capitalise on a mishit back pass from Eoin Massey as the ball broke kindly into the arms of the Bray keeper Kelly.

Massey was sent-off with 15 minutes of normal time remaining to give Longford a big chance of collecting all three points.
A left wing Ben Lynch cross almost yielded a matchwinning goal in the 87th minute but the vital touch evaded a couple of Town players.

Another second half replacement Ryan Graydon (back in action after injury) weaved his way through from the right wing in the 89th minute and let fly with a shot that was heading for the back of the net, only for the ball to be blocked by fellow Longford player Joe Power who was unfortunate to be in the way.

‘The League of Ireland and the FAI strongly condemn the behaviour of a small number of spectators in the away section at the Longford Town v Bray Wanderers game on Friday night.

‘We are now working closely with the Gardai and both clubs to ensure those responsible are held accountable for their actions. The FAI has a zero tolerance policy towards this type of behaviour and will take further action once the Garda investigations are concluded.

'The safety of all players, fans and stewards is of paramount importance to the League of Ireland and the FAI.’