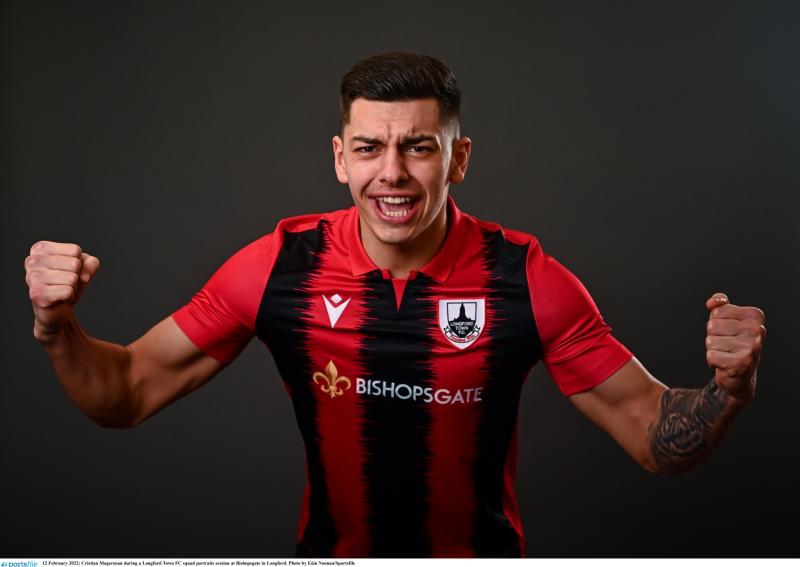 The majestic Cristian Magerusan, scorer of the second goal for Longford Town in the win over Cobh Ramblers

Showing a lot of character in getting back on track in the aftermath of the disappointing defeat at home to Waterford FC the previous week, Longford Town conquered Cobh Ramblers at St Colman’s Park on Friday night last.

Going into the mid-season break on a high to consolidate their rock solid position in the promotion play-offs, the Town had to come from behind to collect all three points and the manager Gary Cronin will be particularly pleased with the big impact made by substitute Cristian Magerusan, scorer of the crucial second goal.

The unfortunate Joe Doyle were forced to retire injured in the 37th minute and in came the majestic Magerusan to change the course of the game.

Second from bottom in the table Cobh broke the deadlock in the 9th minute when Pierce Phillips got through to shoot past the Longford keeper Luke Dennison and Ramblers went very close to scoring a second goal in the 13th minute.

A cracking effort from Luke Desmond hit the inside of the post and the rebound was brilliantly saved by Dennison.

That lucky escape proved to be a turning point as the Town (minus the injured Ryan Graydon) got back on level terms in the 17th minute.

Joe Power was brought down in the box and up stepped Dylan Barnett to blast the penalty into the back of the net for the equaliser.

That was the way it remained until the early stages of the second half as the silken skills of talented attacker Cristian Magerusan began to take effect.

Cristian connected with a cross from Power to put Longford ahead in the 49th minute and after Cobh had a scoring attempt cleared off the line, a cheeky back heel from Magerusan created the opportunity for Aaron Robinson to score the third goal in the 60th minute.

Robinson had hit the post a few minutes earlier during a dominant period for the Town but Cobh were thrown a lifeline when substitute Jake Hegarty was gifted a goal in the 62nd minute.

Some anxious moments for Longford but the nerves were settled when Shane Elworthy capitalised on a mistake in the Cobh defence to direct the breaking ball into the back of the net in the 66th minute.

That killer fourth goal really rattled the Ramblers and it could have got even worse for the home side as Magerusan had a couple of other scoring attempts for the Town during the remainder of the match.

The players now have a well deserved break until Friday June 10 when Bray Wanderers come to Bishopsgate and Longford are also at home the following week (June 18) against the league leaders Cork City.