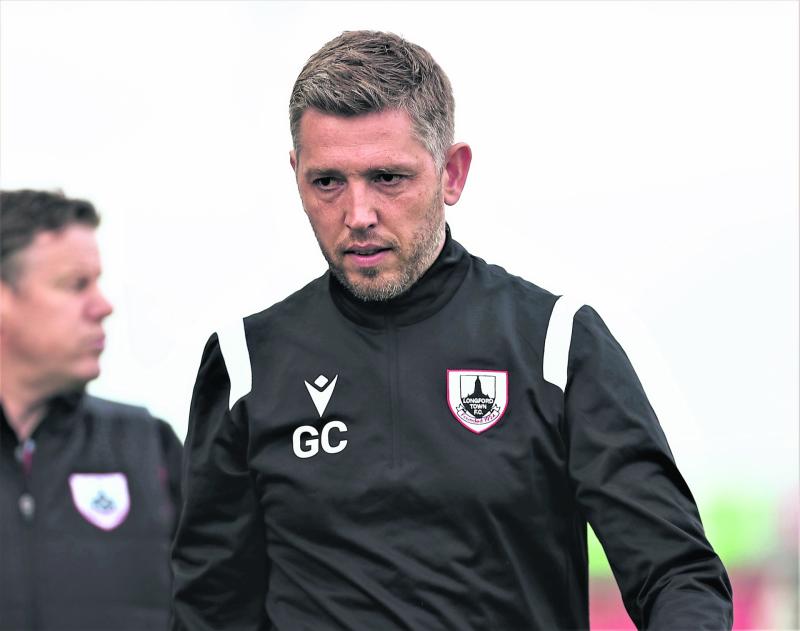 The hope of figuring in the shake-up for the league title might be fading but Longford Town are looking good for a place in the promotion play-offs as they moved ten points clear of sixth placed Wexford FC in the First Division table.

While the Town created the better chances throughout the rearranged fixture at the Markets Field on Monday night, it developed into a frustrating battle in another scoreless draw against Treaty United.
Gary Cronin’s side went to Limerick in search of a third consecutive win but had to settle for a point, mainly due to a couple of great saves by former Town keeper Jack Brady in a repeat of the result at Bishopsgate a few weeks ago.
Brady produced a terrific stop to keep out a cracking volley from Matthew O’Brien who connected with the perfect cross from Dylan Barnett in the 22nd minute.
Longford were most unfortunate not to break the deadlock when the bang-in-form Shane Elworthy hit the crossbar with a couple of minutes gone on the changeover and Treaty keeper Brady came to the rescue of the home side again on the hour mark.
Ryan Grayon knocked the ball into the path of Dean McMenamy but his goalbound effort was stopped by the Treaty netminder in another excellent save.
The Limerick based club also engineered a few scoring opportunities during the course of this tight contest and went very close to snatching a late winner in the 81st minute, only to be denied by Longford keeper Luke Dennison who produced a great save to prevent Marc Ludden from finding the back of the net.
The Town could have won it when substitute Joe Doyle directed a header over the bar in the 84th minute after connecting with a cross from Graydon.
Thus the chance to move into third place in the table was squandered and it is the team directly above them, Waterford FC, who are the visitors to Bishopsgate on Saturday, kick-off 7.30pm.