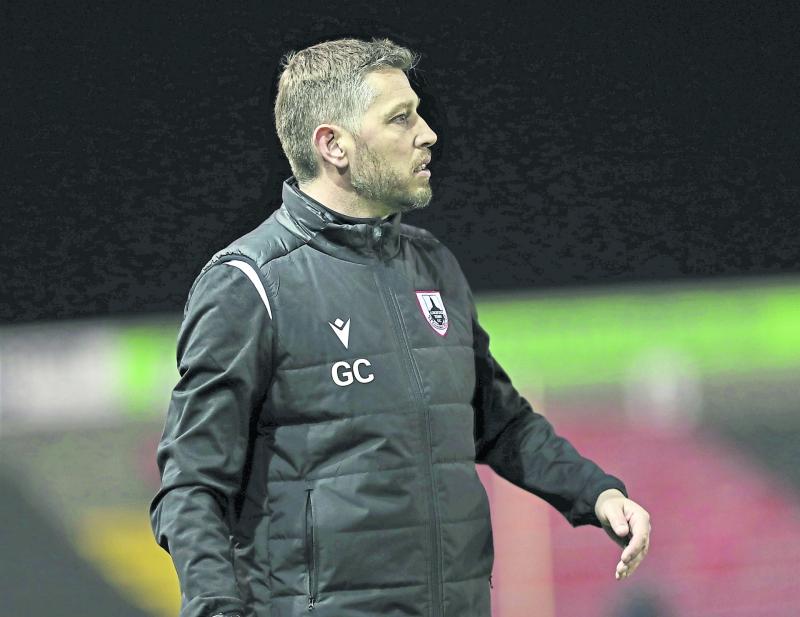 Unfortunate not to be in front at the break after creating a few good chances in a scoreless first half, Longford Town eventually lost out to Galway United at Eamonn Deacy Park on the Bank Holiday Monday.

In suffering the disappointment of a second defeat in the space of four days, Gary Cronin’s side have now slipped to fourth in the First Division table and will need to get back on track against Wexford at Bishopsgate on Saturday night.

Galway broke the deadlock in the 50th minute from a penalty converted by Hurley after substitute McCarthy was brought down after making a great run into the Longford box.

The Town almost equalised in the 55th minute when Eric Molloy had his goal attempt cleared off the line in what was a lucky escape for Galway.

The home side scored a killer second goal in the 72nd minute when Hemmings shot to the net after Longford failed to clear the danger in a set-piece situation.

Second in the table Galway were now firmly in control and whatever hopes the Town had of staging a dramatic late comeback were dashed when Dean McMenamy was sent-off in the 81st minute after receiving a couple of yellow cards in quick succession.

Although down to ten men for the remainder of the match, Longford went agonisingly close to pulling a goal back when a cracking free-kick from Ryan Graydon, destined for the top corner of the net, was brilliantly saved by the Galway keeper Conor Kearns in the 88th minute.

The excellent Kearns also came to the rescue in the early stages of the game when he tipped a header from Graydon over the bar after the Town winger connected with a terrific cross from Shane Elworthy.

Kearns was very much the Galway saviour as he produced another great save to keep out a rocket of a shot from Dean McMenamy in the 20th minute.

Sam Verdon also had a couple of good chances for Longford in the first half and while Galway found the back of the net in the 27th minute through Waweru, the goal was disallowed for offside.