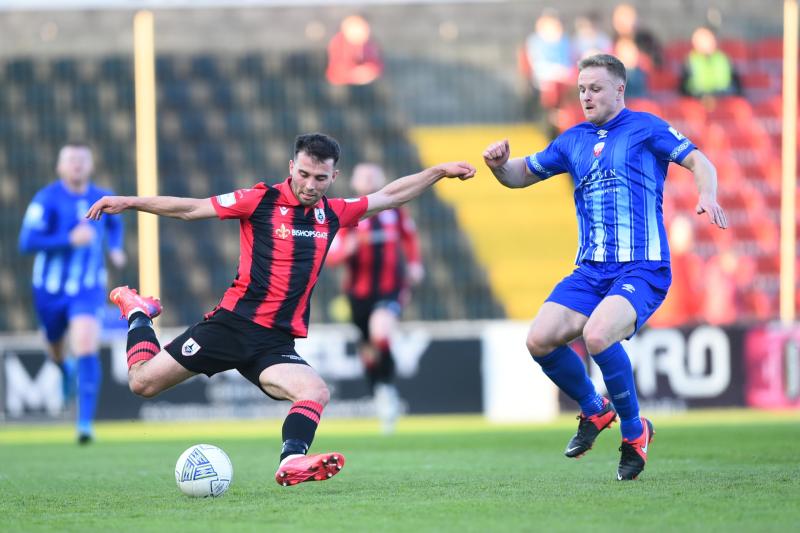 Longford Town are on the road twice over the weekend when they travel to table toppers Cork City on Friday (kick-off 7.45pm) and they are off to Eamon Deacy Park to play second placed Galway United on the May Bank Holiday Monday (kick-off 5pm).

As stated on a few occasions this year's First Division format is a complete mess with a nine team league and now the Town are being penalised with those tough consecutive away games against two of the full time clubs.

To date Longford have played all three fully professional sides (including Waterford) in the First Division and have done tremendously well against them.

The Town played Cork back in the first weekend in March and despite the result being 0-0 it was a very exciting game of end to end football which deserved some goals.

As stated this Cork side is full time and their supporters expect success and in fairness to the local support they can expect around four thousand supporters for home games.

Last weekend they made the short journey to Cobh and the home side had a gate of well over three thousand supporters which is a great boost financially for Cork's other senior club.

Despite being second bottom in the division Cobh gave the league leaders Cork a real battle and they had some very anxious moments during the game which ended 3-2 in favour of City.

Cork got off to a great start. going two up in the first half hour. Ruairi Keating opened the scoring for the visitors after only 3 minutes and Matthew Healy added the second goal just past the half hour mark.

Cobh got back into the game in the 34th minute with a fine goal from Whitemarsh and it was end to end stuff for the remainder of the first half.

Ramblers got back on level terms in the 50th minute when the very impressive Conor Drinan scored for the home side.

Cork were still dictating the play and it was no surprise that they scored again and on this occasion the goal came from Cian Coleman.

Cork will have a massive crowd on Friday for the visit of the Town and let's hope that puts pressure on them if they are struggling to get a result.

Cork have only lost once in the league this season and it was at home to Galway United who played the second half with ten men when Wilson Waweru was sent off in the 49th minute.

Cork have players in their squad who have experienced success elsewhere. Ally Gilchrist and Kevin O'Connor were in the Shelbourne squad that won the First Division last season.

Aaron Bolger is a name that is very familiar with the Town club as he was on loan here.

Striker Ruairi Keating is a real goal poacher and he will need to be closely watched if we are to get anything out of the game but I expect Gary Cronin to have his Town team well set up for this crucial game in the quest to achieve a positive result.

Cobh proved last weekend that the Cork defence can be breached and the new look Longford team are capable of causing a major upset.

Clash against Galway on the Bank Holiday Monday

On the Bank Holiday Monday the Town make the journey to Eamon Deacy Park to take on John Caulfield's Galway United who are currently in second place behind Cork City who are three points ahead but have a game more played.

These are very exciting days for the Western club who recently announced a huge development which is being funded by the Comer Group who are the club's sponsors and also part owners.

John Caulfield is a very shrewd manager and he has assembled a squad that is capable of winning promotion and like the league leaders Cork, it must be said that Galway have the potential of getting massive home crowds.

The fact that the Town are the only club to have inflicted a defeat on Galway must be a big plus for Gary Cronin as he plans to get another three points on the board.

When the teams met at Bishopsgate the Town had a merited 2-1 victory. Galway took the lead on 11 minutes when the unfortunate Longford defender Mick McDonnell put the ball past keeper Dennison.

This reversal didn't deter Longford  as they pushed forward for an equaliser and that came just before half-time when team captain Sam Verdon scored.

The Town sealed all three points when the very impressive Darren Craven scored a cracking winning goal in the 77th minute.

As stated Galway are a full time club and they are geared for the big move to the Premier Division.

Club captain Conor McCormack is one of the most experienced midfielders in the league, Premier and First Division.

Stephen Walsh, who played for the Town a few seasons ago, is beginning to get a name as a goalscorer and got  the opening goal against Bray last weekend in their 2-0 victory over Pat Devlin's struggling team who are currently at the wrong end of the table.

Killian Brouder is a very versatile player who also comes up with some good goals for Galway while Mikie Rowe is another quality player.

Wilson Waweru, Jordan Adeyemo and Francely Lomboto are players who can cause problems for opposing defences.

Another new arrival this season, Manu Dimas, scored the all important winner against Waterford at the RSC recently.

The fact that Galway are a full time outfit  must give them an advantage but those watching the Town this season can see the influence of Gary Cronin since he took over the management of the club.

This will be a hard weekend for the Town's part time squad but this team doesn't know when they are beaten. The Town had to make a change in their starting line-up against Treaty United at Bishopsgate on Saturday night last.

Ryan Graydon, who picked up a knock against Bray, wasn't fit to start against the Limerick side and he was replaced in the starting eleven by Karl Chambers who came in and did a fine job in midfield.

The team missed the free kick specialities from Ryan but we hope that he is back in contention for a place in the squad for the games against the top two at the weekend.

Gates open at 5am