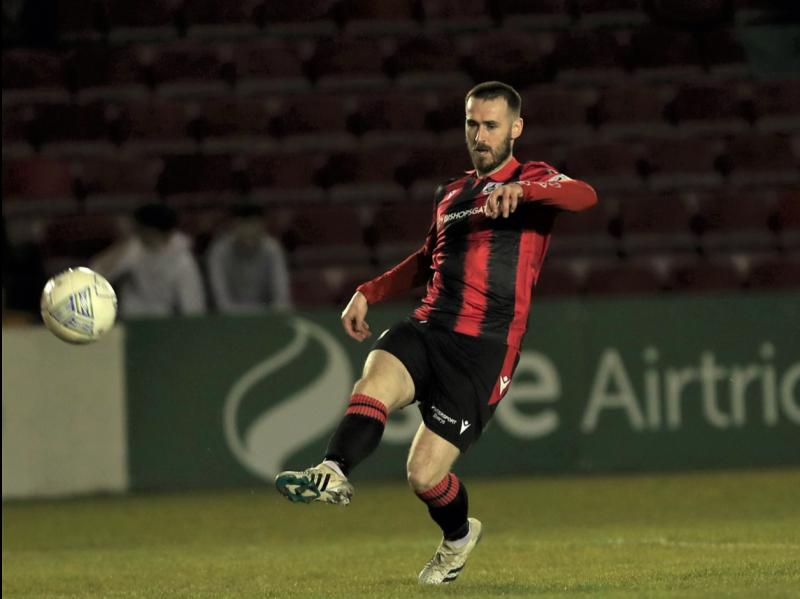 Shane Elworthy, who scored for Longford Town in the 1-1 draw against Waterford

Longford Town were on the brink of winning a third consecutive game in the SSE Airtricity League First Division, only to be denied as Waterford snatched a last gasp equaliser at the RSC on Friday night.

After suffering the same sort of heartbreak in a number of Premier Division fixtures last season, Longford were gutted at the final whistle as the home side scored in the fourth minute of stoppage time to earn a fortunate draw.

The Town produced a tremendous first half performance against the title favourites Waterford and broke the deadlock in the 36th minute when defender Shane Elworthy planted the ball in the back of the net.

Ryan Graydon’s ball from midfield sent Sam Verdon away, but after his shot came back off the bar, the rebound from Darren Craven saw Darragh Power clear off the line, before Elworthy blasted the loose ball past the Waterford keeper Brian Murphy.

In the aftermath of the excellent win over Galway United at Bishopsgate the previous week, Longford were in a confident frame of mind.

While Waterford piled on the pressure in the second half, the Town defence stood firm and the resolute visitors looked like holding out for what would have been a massive win.

The frustrated blues were on the verge of crashing to a third defeat in a row but substitute Louis Britton came to the rescue with time almost up.

Following a brilliant save by Town keeper Luke Dennison late in the game, Waterford finally found the back of the net in the 94th minute

Bristol City loanee Britton powered a near post header past Dennison after connecting with a Junior Quitirna corner kick to salvage the situation for the southerners, much to the sheer dismay of the Longford players.