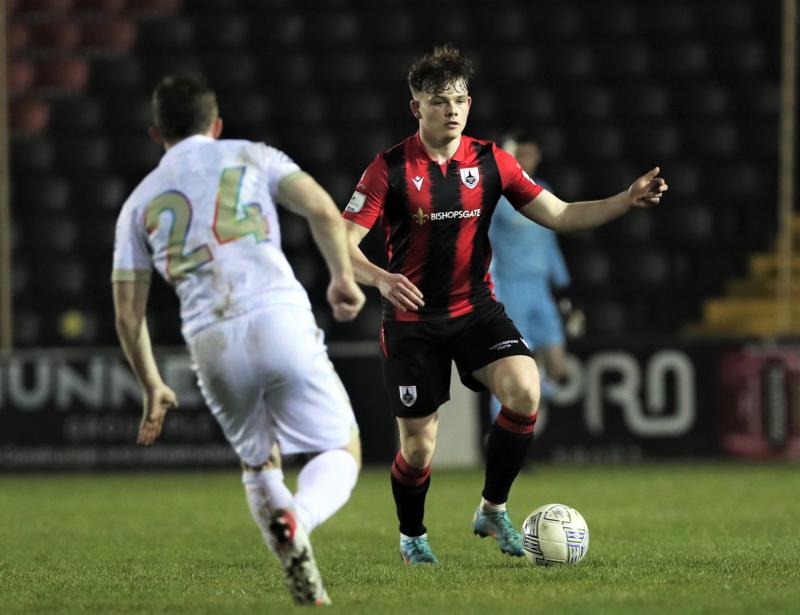 The games are coming thick and fast and they don't come much harder than a trip to the RSC on Friday (kick-off 7.45pm) to play the pre-season title favourites Waterford who are going through a bit of a bad run at the moment.

After last weekend's games the blues, who were relegated from the Premier Division last season along with the Town, lost their second game of the season.

The Waterford FC board wanted an immediate return to the top flight and with that in mind they brought in Ian Morris who guided Shelbourne up as First Division champions last season.

The new Waterford manager Morris wanted to have a full time set up and the club's backers agreed and they held  most of last season's team and added a few new faces to put a strong squad together.

Waterford opened their campaign with a 5-2 victory over Athlone in Athlone. The following week they played Bray Wanderers at the RSC and a Louis Britton goal in the 27th minute earned them three vital points.

The following week they played Galway United at Eamon Deacy Park and raced  into a two nil half-time lead with goals from  Junior Quitirna and Eddie Nolan.

But the home side charged back into the game in the second half with goals from Jordan Adeyemo and former Town player Stephen Walsh to snatch a draw.  Waterford ended up with ten men when Richard Taylor saw red in the 85th minute.

The following weekend they beat near neighbours Wexford 2-1 at the RSC with another goal from Junior (a penalty) and a second one from Phoenix Patterson.

In the first Monday night game Cork City beat them two nil with goals from Ruairi Keating (pen) and a Darragh Power og.

On Friday night last they travelled to the Markets Field to play a very impressive Treaty United who beat them 2-1. People are starting to take notice of Treaty in recent weeks and rightly so and they will have a big say in the battle for promotion.

Waterford have lots of experienced players in their squad starting with their keeper Brian Murphy who has over twenty years experience at the highest level.

Morris has added some class players at the start of the current campaign. Richard Taylor has come in from Southend, having previously played with Burnley. Louis Britton came from Bristol City, Junior from Charlton Athletic and Anthony Wordsworth from Barnet and Wimbledon and he scored the consolation goal against Treaty.

The Waterford team may have a big input of players from across the UK but they also have some very promising youngsters in their panel.

Darragh Power and Niall O'Keeffe both came through from the club's very impressive youths set up.

There is no doubt that manager Morris will be livid after losing three points in Limerick and he will be hoping to bounce back on Friday night against Longford at the RSC. The Town's new look team under new manager Gary Cronin were full value for their 2-1 victory over previously unbeaten Galway.

Galway are a full time club with a manager who expects to win trophies and John Caulfield wasn't a happy man at full time.

The fact that the highly rated Galway side were playing second fiddle for most of the game is a real tribute to Gary Cronin and his fast improving side.

The visitors got an early Christmas present as Mick McDonnell scored a bizarre own goal but this lively Town side didn't drop their heads against very strong opposition. The records will show that Sam Verdon scored the equaliser just before the half-time whistle and Darren Craven scored a beautiful winner and one has to say a special well done to Callum Warfield who had replaced the other goalscorer for the remaining 15 minutes of the game.

This great result against Galway must give the youthful Town team a great confidence boost and they all can look forward to a very rewarding season.

This was a real team effort and if they continue to improve they could be in the shake up for promotion in the coming months. Gary Cronin, James Keddy and the rest of their backroom staff must take great credit for the fine performances to date.

The club would like to say a big thank you to our supporters for being there through thick and thin.

After Friday's trip to the RSC it's back to Bishopsgate on Saturday week in the clash against Athlone.

Another very pleasing aspect from this year's squad is the amount of young players who have played in our under 19s and have now got into the first team squad.

Exciting times for the Town supporters at the moment but we need to keep up the pressure and where better to do it than against Waterford at the RSC this Friday night.