Longford Town battle back for big win over Galway United 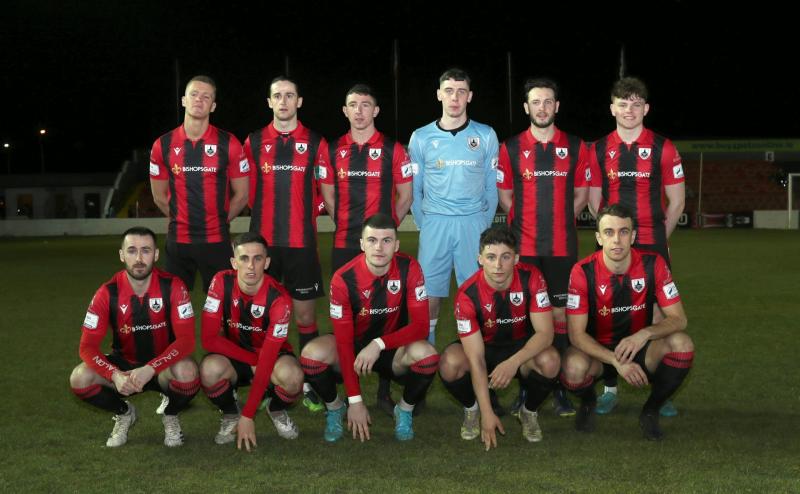 Longford Town issued a strong statement of intent in the battle for promotion in the SSE Airtricity League First Division when they came from behind to score a big win over one of the main title contenders Galway United.

Rattled by the concession of a bizarre own goal in the early stages of the game, the Town showed a lot of character to recover in getting the better of the previously unbeaten Galway side at Bishopsgate on Friday night last thanks to a cracking strike from Darren Craven.

The stunned home supporters could not believe it when defender Mick McDonnell played a completely misjudged back pass to keeper Luke Dennison into the empty net with 11 minutes gone on the clock but there was a change of fortune for Gary Cronin’s side just the break.

Sam Verdon got the vital touch in a goalmouth scramble as the Galway keeper Conor Kearns just failed to prevent the ball crossing the line and that proved to be a turning point as hard working Longford went in search of a winner in the second half.

A draw was looking the likely outcome before Craven blasted an unstoppable shot from outside the box into the back of the net in the 77th minute and resolute Town stood firm during the remainder of the match to clinch a most significant result.

After Galway defender Charlie Lyons directed a header into the back of the Longford net in the 10th minute, the linesman raised the flag for offside but moments later the visitors were gifted the lead courtesy of the Mick McDonnell own goal.

With confident Galway opting to sit back in a rather complacent manner after the deadlock was broken, the Town were given the opportunity to claw their way into the game and it took a couple of fine saves from the opposing keeper Kearns to keep his net intact.

Kearns was alert to the dipping shot from Ben Lynch and the Galway keeper was particularly agile when he parried a Dean McMenamy free-kick out for a corner when the ball was heading for the top corner of the net in the 41st minute.

Longford’s strong finish to the first half was eventually rewarded when Ryan Graydon, after capitalising on a mistake by Galway defender Conor O’Keeffe, knocked the ball into the box and Sam Verdon snatched the scrappy equaliser in the 45th minute.

That gave the Town a great lift going into the second half and after Mick McDonnell directed a header off target in the 53rd minute, Verdon had a shot blocked soon after in his effort to score a second goal.

While Galway were poor on the changeover in failing to match the greater intensity produced by the determined home side, Killian Brouder went close for the westerners when he headed the ball over the bar in the 73rd minute.

Longford then struck for the stunning winning goal with the 25-yard piledriver from Darren Craven ending up in the back of the net in giving Kearns no chance whatsoever.

Galway substitute Jordan Adeyemo, after turning quickly in the box, had a good chance to level matters in the 85th minute but his close range shot was blocked down by Mick McDonnell who made amends for his bad blunder that resulted in the own goal.

Further late pressure from John Caulfield’s full-time outfit saw Dave Hurley shoot wide and while Adeyemo finished the ball to the net in stoppage time, the goal was disallowed for offside.

With a couple of games in hand following the bad weather postponement of the games against Cobh Ramblers (refixed for April 12) and Treaty United (now on May 16), fourth placed Longford are making steady progress in the push for promotion.

Particularly prominent in the excellent victory over Galway were Dean McMenamy, Ryan Graydon and Ben Lynch in the overall encouraging performance that delighted the Town supporters.