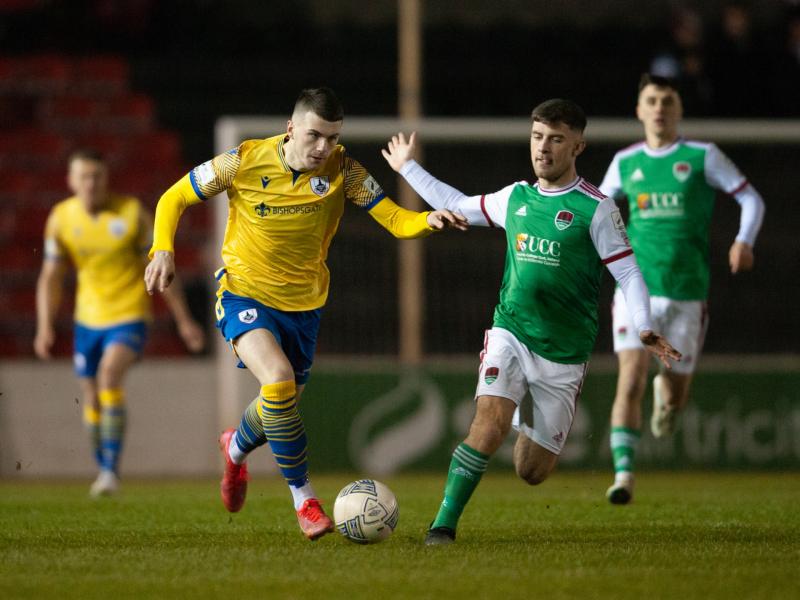 The Town travel to Limerick on Friday to play the impressive Treaty United, followed by a home game against Bray Wanderers on Monday night, kick-off 7.45pm.

Treaty United are the newest club in the First Division having come in last season when Limerick were unable to get a club licence and they applied at the last moment and got the go ahead to join the league.

A new consortium of locals from around Limerick got together and came up with the new club which was to be managed by Tommy Barrett who is a top class coach.

Even though it was a last minute thing Tommy and the club have to be complimented on the job to date. To come in so late and put a team together and finish fourth in the table is an amazing achievement for Tommy and he will expect to better that finish this season.

Last weekend they drew against Cobh away while their other proposed home fixture against Athlone Town was postponed due to inclement weather conditions.

The Treaty squad has a great sprinkling of experience and youth and with that in mind a lot is expected from this squad this season.

The current Treaty team includes three former Town players in their squad. Keeper Jack Brady has moved from Shelbourne to take over the goalkeepers jersey and in Jack they have an excellent keeper who has done well with all his former clubs including the Town.

Central defender Joe Gorman will be remembered for his excellent goals at the end of the 2020 season when we were chasing a place in the Premier Division.

Joe has lots of experience here and in the Irish league where he played for Cliftonville and most recently with Portadown. His most recent League of Ireland club was Galway United while he also played with Drogheda United.

Another former Town player is striker Enda Curran who joined Treaty this year and he has made an instant impact with two goals against Wexford on the opening day of the season.

Mark Ludden and Conor Melody, like Curran, are former Galway players and they are two very accomplished players.

Former Shamrock Rovers player Joel Coustrain is an excellent striker and he will be expected to score lots of goals for his new club.

Looking at the Treaty squad one can see that it includes many very good players and with that in mind one expects a tough encounter in Markets Field on Friday night.

Bray the visitors to Bishopsgate

After the tough test against Treaty United  on Friday it's back home to Bishopsgate on Monday night next when we take on Bray.

In their opening game of the season at the Carlisle grounds they played Cork City and they were on the end of a six goal hammering from the Southern side. This was the first game for the recently amalgamated Bray/Cabinteely club which is now managed by former Cabinteely and former Bray manager Pat Devlin.

Last season Bray were in the play-offs but they just weren't strong enough in the end. Bray's second defeat to date was a one nil defeat against title favourites Waterford at the RSC when Ian Morris's promotion favourites got through from a goal scored by Louis Britton.

There is no doubt that this Bray side will improve but they have a very tough home game against Galway United on Friday next.

Galway, along with Cork and Waterford, are all full time clubs and one expects that to be a big advantage to them as the season progresses.

When you look at the Bray squad you will see many familiar names in it, many former Town players. Keeper Michael Kelly didn't play in the opening game against Cork but replaced Stephen McGuinness for the Waterford game.

Dean Zambra, who was a very popular club captain during his time here, has played in their opening two games as has former Town striker Rob Manley.

Callum Thompson, who was also with the Town, came on in the game against Cork when he replaced Rob Manley in the closing stages.

Both Oscar Brennan and Kieran Marty Waters have yet to feature for Bray in this year's league and they will give the seaside club much strength and experience when they are available.

Keith Dalton, Zac O'Neill and Vilius Labutis are players who can also come in and do a job for the team.  It will take Pat Devlin some time to get the full value out of his big squad as he will be trying out many different combinations until he gets it correct.

Over the years Bray have always been hard to beat and there is no doubt that this season will be no different but we have good inside information from our new manager Gary Cronin who would have lots of knowledge on his former club.

Longford’s first game of the season on Saturday night last was a pleasant surprise for the Town supporters who were wondering what was in store for the club in the new season.

First of all there were a few surprises in the first team in a first competitive game under Gary Cronin in the 0-0 draw against Cork City at Bishopsgate.

Keeper Luke Dennison got the nod over Lee Steacy and he didn't let down his manager with  a very steady game making a few excellent saves during the course of the game.

The inclusion of young Matthew Dunne in the centre of the defence alongside Mick McDonnell raised a few eyebrows but the former under 19 player had an outstanding debut.

The experienced Michael Barker at right full didn't put a foot wrong also on his debut and he will be pushing for a run in defence when Shane Elworthy is back fully fit. Shane was on the bench on Saturday after being out injured.

Karl Chambers was also on the bench and he, like Shane, was returning after injury also.

Former Bray players Dylan Barnett, Ryan Graydon and Darren Craven all showed that they have a lot to offer in the coming season while on loan Dean McMenamy belied his youth with a fine debut also.

Eric Molloy caused many problems for the Cork defence while captain Sam Verdon showed he will cause problems for opposing defences.

Strikers Aaron McCabe and Cristian Magerusan are both out injured at the moment and manager Cronin will be hoping for a speedy recovery for both.

It was great to see young Ben Lynch come on for Eric Molloy in the second half and the former under 19 player looks a great prospect for the future.