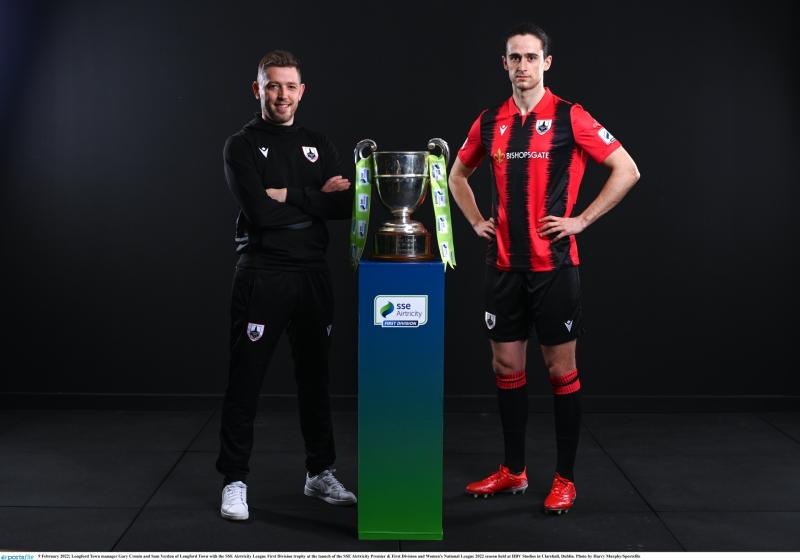 Longford Town supporters will see their team in a first competitive game of the 2022 season with a home fixture against Cork City at Bishopsgate on Saturday night, kick-off 7.30pm.

The Town supporters have yet to see what could be termed the club's best starting eleven as most of the pre-season games had Town line-outs that included three to four trialists and one expects Gary Cronin to show his hand for the first time on Saturday next.

Gary came in and had to start rebuilding his team with thirteen or fourteen players from last season departing to clubs in the Premier and First Division.

Gary knows the Longford scene from his time as a player and also in management positions. He had a few great seasons as manager of Bray Wanderers having made it to the First Division promotion play-offs. Gary now has an equally tough job to get the Town back to the promised land which is the Premier Division.

Unfortunately for manager Cronin the proposed opening game of the season against Cobh Ramblers had to be postponed due to the terrible weather conditions and that is still not refixed.

After missing the opening game and then having a free weekend due to this farce of a nine team league, we now come to next Saturday's game against one of the favourites for promotion Cork City.

Cork kicked off the 2022 season at the Carlisle Grounds in Bray and they walked away with three points from a resounding 6-0 victory over Pat Devlin's side, the amalgamated Bray and Cabinteely clubs who were expected to take the league by storm.

Cork, under the guidance of former Republic of Ireland midfielder Colin Healy, were rampant in the runaway win.

Former Town player Dylan McGlade was the Cork hero on the day as he helped himself to a hat-trick with goals in the 34th, 60th and 63rd minutes.

On loan player Barry Coffey scored two goals in the 57th and 59th minutes while the final goal came from new signing Ruairi Keating who has lots of experience in the Premier and First Division with Galway United to name one of his previous clubs.

Cork City are a full time club and the fact that they didn't make it to the play-offs last season has put a lot of pressure on manager Healy to get this sleeping giant promoted this season.

On Friday night last in front of  a massive 5000 plus crowd Cork were surprisingly beaten by Galway United under the managerial skills of former Cork boss John Caulfield which leaves Cork three points behind Waterford who have two victories to date against Athlone Town 5-2 away and a 1-0 victory over Bray on Friday last.

Going into Saturday night's game the Town will be hoping to get off to a good start against Cork City. The current Town squad have ten players from last season with a sprinkling of youth and experience.

Lee Steacy is back for another season and we expect him to show the League why he is rated as one of the best keepers in the Division if not the best.

The second keeper Luke Dennison has returned to the club after being with Galway United last season. Regular defenders Mick McDonnell and Shane Elworthy are still with the club and a lot will be expected of them and their experience will be invaluable to the younger players in the squad.

Ben Lynch has progressed from our under 19s into the senior squad and big things are expected from the young lad.

Former Bray defender Dylan Barnett has really impressed in the pre-season games and another former Bray player Ryan Graydon has also shown up very well with his goal against Finn Harps showing some class.

With the midfield spine from last year's team gone we are expecting Aaron Robinson to take over the mantle of the minder in midfield where another former under 19 player Matthew O'Brien is expected to be a big star this season. Matthew has been in the first team squad for the past few seasons and we expect him to be a regular this season.

The return of Sam Verdon adds experience to this youthful squad and his ability to score crucial goals is a vital asset.

Striker Callum Warfield is another player who is expected to do well in the First Division. Dean McMenamy has joined the club on loan from Shamrock Rovers and a lot is expected of this young player who can play in defence or midfield.

Another new player Darren Craven featured in most of the pre-season games and is in contention to start against Cork.

Eric Molloy has joined the club after being with Shels and the former Wexford player, who was out of the country for some time, has shown that he has what is needed to make a big impact with Longford.

One player who doesn't need any introduction to the Town supporters is Karl Chambers who has been with the club for many seasons. One of the most committed players in the club he has the advantage of his versatility, having played in many outfield positions and he can chip in with crucial goals also.

Cristian Magerusan  joined the club in pre pre-season and he scored in the friendly against Shamrock Rovers but unfortunately he has picked up an injury and let’s hope that it isn't too serious.

Finally we come to a player who needs no introduction to the Town supporters and he is another player who has come through from the under 19s.

We are talking about Lavey native Aaron McCabe who made a name for himself during our last promotion race when he scored crucial goals in the final games of the 2020 season.

We are all delighted to see Aaron McCabe back in the red and black this season after looking surplus to requirements last season when he seemed to be out of favour with the then manager Daire Doyle.

The Cavan lad can be the goal scoring player that we need this year if we are to have any chance of promotion.

In the last few days the Cork club issued a statement that their current manager Colin Healy will take a temporary break from his duties at the start of March for personal reasons. He was in charge of the team at Turners Cross on Friday last for the game against Galway.

In a short statement Cork City football club did not provide an exact timeline for Healy's return to the club. Healy is a very popular figure down around Turners Cross and all in Longford Town wish him a speedy return to the dugout.

GET YOUR TICKET NOW

It's well known that the Town's supporters are the best and very passionate in their support for the club and we hope to see a big crowd at Saturday's game against Cork City. Season tickets are going well and supporters wishing to buy one can do so by contacting the club on the website.

Tickets for the game v Cork City can be purchased online at ltfc.ie/matchtickets/ while cash will be taken at the turnstiles on Saturday night