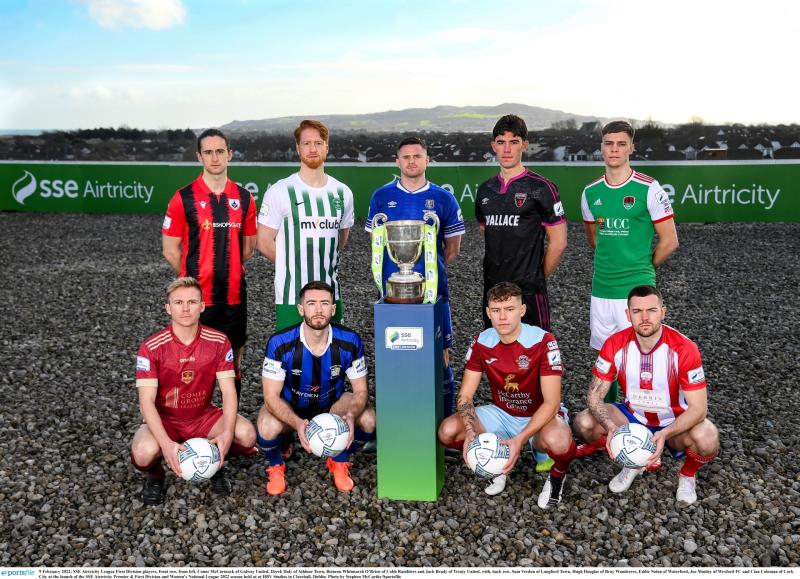 The fierce struggle and eventual relegation from the Premier Division last season is now but a distant memory as Longford Town prepare for their opening fixture in the second tier of the Airtricity League.

Cobh Ramblers come to Bishopsgate on Saturday night (kick-off 7.30pm) and it will be a big boost for the new manager Gary Cronin if his side can make a winning start on their return to the so competitive First Division.

With no less than 16 players gone from the 2021 squad in a mass exodus, it remains to be seen whether Longford can feature in the promotion picture with a general new look squad under the guidance of former player Cronin who was also the assistant manager during the period that Tony Cousins was the first team boss.

Lee Steacy, Karl Chambers, Ben Lynch, Shane Elworthy, Aaron Robinson, Callum Warfield, Mick McDonnell, Matthew O’Brien and Luke Dennison are the only players remaining from the torrid time in the top flight last year and things can only get better in the aftermath of that horrendous experience.

Just two games were won, both at home against Derry City and Dundalk, from a total of 36 fixtures and while Longford suffered the bitter disappointment of 25 defeats it must be said that the midlanders were most unlucky on quite a few occasions.

The four matches against the eventual league champions Shamrock Rovers spring to mind, ending in agonising late, late defeats, but the best forgotten 2021 season is now consigned to the past as Longford Town look to the future.

Losing such quality players as local star Aodh Dervin and Aaron O’Driscoll (both of whom have signed for Damien Duff’s Shelbourne) is a big blow but they cannot be blamed for their desire to continue competing at a higher level.

Other key players gone are Paddy Kirk (Sligo Rovers) and Dylan Grimes (Drogheda United) while Rob Manley has joined the revolution at Bray Wanderers in their amalgamation with former First Division club Cabinteely.

The loss of such loyal servants in Dean Zambra and Dean Byrne will also be felt and the current Longford Town squad could be hard pressed to make it through to the four promotion play-off positions, never mind the hope of actually winning the First Division title.

On the plus side the versatile Sam Verdon is back for another spell with the club and he is joined by some other Bray players who have followed the former Wanderers manager Gary Cronin to a new challenge at Bishopsgate.

Dylan Barnett, Ryan Graydon and Darren Craven all started for Bray in the defeat against UCD in the First Division promotion play-off final against UCD last season and are clearly capable of making a big impact for Longford Town.

Verdon was brought on in the second half against UCD and his ability to score vital goals will be crucial if the Town are going to be promotion contenders.

Other new signings to watch out for are Eric Molloy (ex-Shelbourne) and Dean McMenamy (on loan from Shamrock Rovers) and there is a certain degree of optimism within the Longford squad despite the major overhaul.

While Gary Cronin will be hoping to emulate what the former Town manager Daire Doyle achieved in guiding the club to the Premier Division through the huge excitement of the 2020 promotion play-offs, the opposition is stiff.

Waterford, who were also relegated last season, will be going all out in their bid to make an immediate return to the top flight while Galway United and Cork City are other leading contenders for the First Division title.

Bray Wanderers could also be in the hunt for honours, with a place in the promotion play-offs a more realistic prediction, while you cannot rule out the chances of Wexford and Limerick club Treaty United finishing up in the top five after making a few shrewd signings to strengthen their squads.

That leaves Athlone Town and Cobh Ramblers as the supposed outsiders in the nine-team league involving a 32 fixtures schedule but both may prove to be difficult opponents.

In the final analysis, Longford Town will expect to be in the promotion mix and with the backing of the loyal home supporters at Bishopsgate for the Round 1 clash against Cobh on Saturday night, Cronin’s charges can take a positive first step in the right direction.

The nine teams in the 2022 First Division will play each other three more times this season, a total of 32 league fixtures for each club